I want there to be no peasant in my kingdom so poor that he cannot have a chicken in his pot every Sunday. – Henry IV

Pilgrim’s Pride Corporation (NASDAQ:PPC) was hit hard during March and April due to restaurants and food service providers shutting down, but now that situation is changing, and PPC should benefit from the economy reopening and a better trade deal with China. At a recent price of $18.21, it fully reflects the legal overhangs the company is currently under with a price fixing scandal that has caused President Jayson Penn to step away from the company. The price is trading well below historic valuations and the expectation of future growth due to acquisitions. 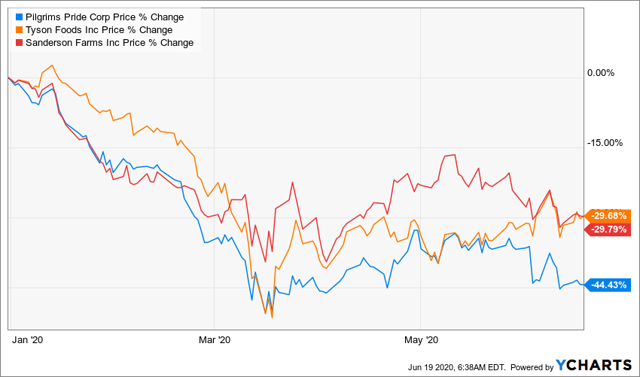 Pilgrim’s Pride is the second largest poultry producer in the US and has gained market share in Mexico and Europe and entered the pork market through a UK acquisition. It is currently trading at a PE of 10.3 compared to its five-year average PE of 13.4, which is similar to Tyson’s (NYSE:TSN) historical average PE of 13.5. Since the news of the price fixing scandal hit at the beginning of the month, PPC has fallen 12% for June whereas Tyson is up 4.3% and Sanderson (NASDAQ:SAFM) only dropped 6.3%. This is leading to a good entry point for owning shares of an industry leader. Looking at Price to Sales, PPC is also trading well below its historical average of 0.6 and below its competitors. 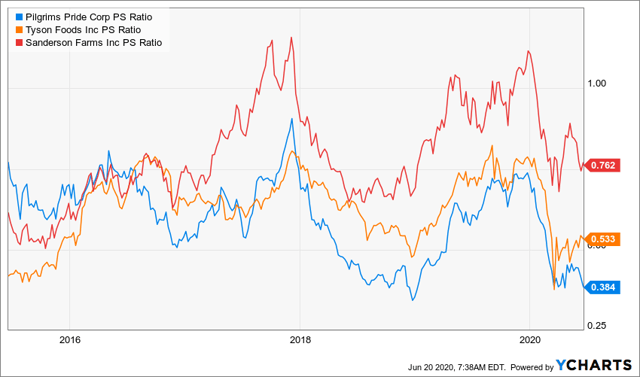 PPC will benefit from the US and global economies reopening. Chicken consumption is on the rise around the world given the shortages of beef during Covid-19 and increased prices, a rising middle class in developing markets, and the removal of the Chinese ban on imported chicken. The Organization for Economic Cooperation and Development (OECD) estimates worldwide poultry consumption to increase 2% from 2018 to 2025, with nations such as China increasing 10%, Japan 8%, and India almost 20%. From looking at Pilgrim’s first-quarter numbers before Covid-19 hit, they were set to be ahead of last year’s numbers as far as egg sets, hatchability and placements. Chicken placements were well above 1Q 2019’s level and the five-year average, but fell to the bottom of that average in April given the shutdown of restaurants and food service providers.

Revenue was 12% higher than 1Q 2019 and marginally higher than 4Q2020, so even though March was the start of quarantine and shutdowns, PPC was still able to generate greater revenue. Net income came in below previous levels and EPS was down 27% from 4Q19 to 1Q20. The largest deterrent to EPS was the loss on foreign currency transactions and the increased litigation costs from the Moy Park acquisition.

One of the drivers of revenue growth was the increased export of chickens. In November 2019, China lifted its five-year ban on US poultry imports. Net sales increased 13% from 1Q19 to 1Q20. China’s lack of domestic pork due to infection and the lifted ban on imports should continue to propel exports higher as 2020 progresses and help offset some of the loss due to the prolonged US economic shutdown. 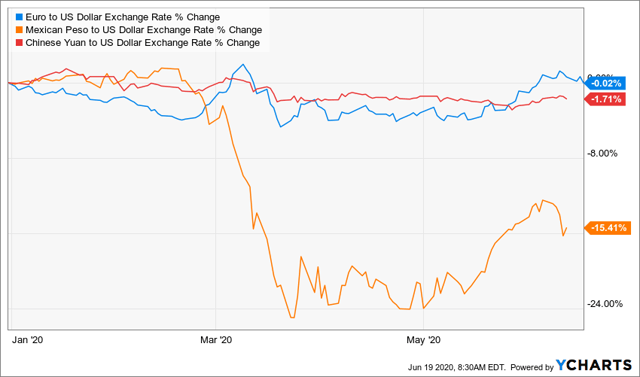 One tailwind for PPC is the weakening of the US dollar. As discussed in this week’s Lead-Lag Report, the dollar is in the beginning stages of a decline. “Last week marked a brief halt in the falling dollar, but this feels like just a blip in an otherwise strong downtrend. The excessive Fed stimulus and weak growth narrative supports a further decline from here.” The weaker dollar will help exporters such as PPC by making their products more attractive to other nations.

Some of the largest headwinds for Pilgrim’s are the volatile agricultural prices for corn and soybeans used for chicken feed. Currently the USDA estimates corn and soybean stock to be on the rise, which should keep prices low, and farmers are expected to increase plantings 7-9% for 2020.

Buying PPC at the current depressed levels is a bet on the world economies reopening and developing markets continuing to grow their middle class.

Additional disclosure: This writing is for informational purposes only and Lead-Lag Publishing, LLC undertakes no obligation to update this article even if the opinions expressed change. It does not constitute an offer to sell, a solicitation to buy, or a recommendation regarding any securities transaction. It also does not offer to provide advisory or other services in any jurisdiction. The information contained in this writing should not be construed as financial or investment advice on any subject matter. Lead-Lag Publishing, LLC expressly disclaims all liability in respect to actions taken based on any or all of the information on this writing.