Philip Morris International: A Great Way To Ride Out The Fear (NYSE:PM)

On Tuesday, April 21, 2020, international tobacco giant Philip Morris International Inc. (PM) announced its first-quarter 2020 earnings results. At first glance, these results were quite impressive as the company beat the expectations of its analysts in terms of both top-line revenues and bottom-line earnings. This is in spite of the global outbreak of the COVID-19 pandemic but, honestly, I have a hard time believing that Philip Morris International will be affected by this anywhere near as much as many other companies due to the highly addictive nature of its products. A closer look at the actual earnings report does indeed show that there was a great deal to like here as the company posted very strong growth in many key financial measures despite the continued decline in the popularity of smoking globally. The company also continues to be a very respectable dividend play if you do not have qualms about earning money off of a vice.

As my long-time readers are no doubt well aware, it is my usual practice to share the highlights from a company’s earnings report before delving into an analysis of its results. This is because these highlights provide a background for the remainder of the article as well as serve as a framework for the resultant analysis. Therefore, here are the highlights from Philip Morris International’s first-quarter 2020 earnings results:

It seems likely that the first thing that anyone reviewing these highlights is likely to notice is that essentially every measure of financial performance improved fairly significantly year-over-year. This is despite the fact that the company sold far fewer cigarettes than it did in the corresponding period of last year. This is because the company was able to successfully raise its prices, achieving a 7.7% price increase compared to the prior year quarter. This is a strategy that pretty much every tobacco company has been using to generate growth despite the fact that citizens of the developed world have been smoking less and less due largely to health concerns. Fortunately for tobacco companies, smokers are brand loyal and the product is highly addictive so this strategy has been working thus far.

READ ALSO  US election 2020: how to avoid being manipulated by fake news

Philip Morris International and its American sister company Altria Group (MO) have also developed another strategy to continue to generate growth in a world in which a growing percentage of the population does not want to smoke. As I explained in a past article, they have developed a product called IQOS that essentially heats up a tobacco cartridge so that it produces a nicotine-containing tobacco vapor without the smoke that ordinary cigarettes do. The company has been marketing this product as a safer alternative to smoking because the vapor does not contain all of the dangerous compounds that cigarette smoke does. It appears that this product has caught on as the tobacco cartridges used to fuel the unit now make up almost 10% of the company’s total shipment volume after only five short years: 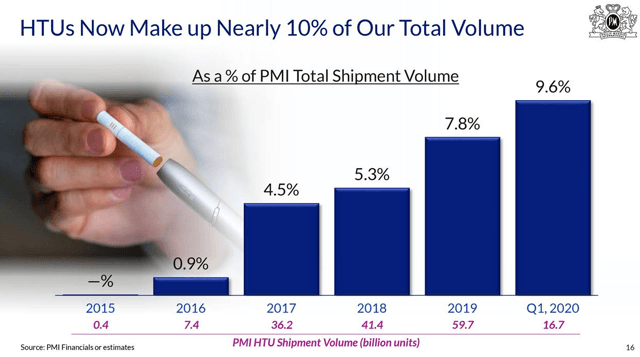 In its earnings report, Philip Morris International credited the growing popularity of this product for assisting it in keeping its revenues up. This was particularly true in Australia, Germany, Mexico, the Philippines, and Turkey. Some of these nations are ones that have been seeing declining cigarette consumption, indicating that the company’s plan to use this product to offset declining cigarette consumption is working as it hoped.

With that said, not every area of the world saw its consumption of cigarettes go down. The company had total shipments of 21.419 billion cigarettes to Eastern Europe in the most recent quarter, a 5.41% increase over the 20.320 billion that the company shipped there last year. In addition, the company saw slight volume increases in both the European Union and East Asia & Australia. This was nowhere near enough to offset the declines elsewhere though: 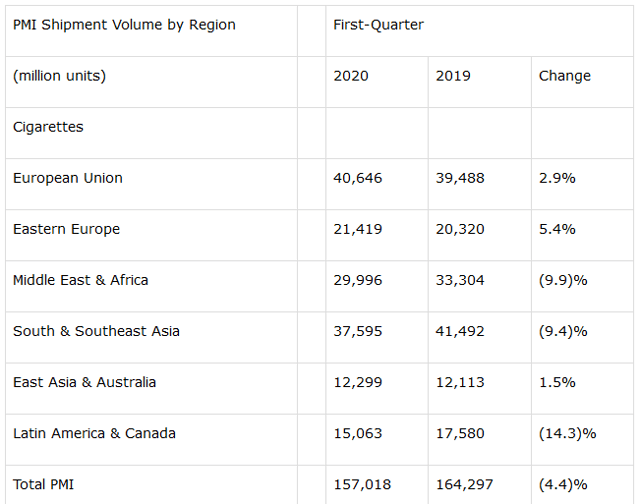 In will admit to being somewhat curious about why volumes increased in these particular areas. In general, their cultures are friendlier to it than what we see in the Americas but there has still been a push by the respective governments to move people away from smoking in order to promote public health. It is possible that the stress from the COVID-19 pandemic has led people to seek relief by smoking much as Americans have increased their alcohol consumption ever since the stay-at-home measures were implemented. I will admit though that this is pure speculation on my part and there could certainly be other factors at play. Regardless, the fact remains that for some reason consumption of both smoked and heated tobacco increased in those regions year-over-year and this proved beneficial for Philip Morris International. 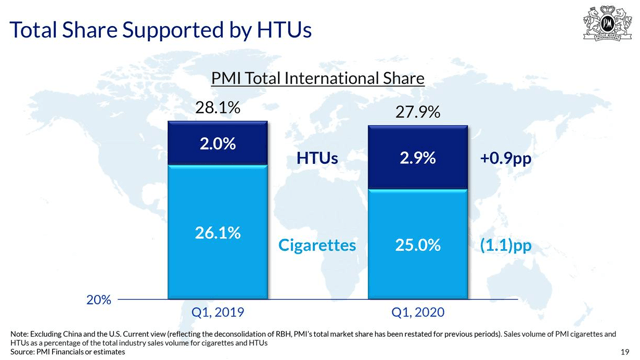 Market share is important because it is a measure of how well a company is doing relative to its competitors. As we can see, Philip Morris International is by far the dominant tobacco company globally, although it does not have any presence in the United States. Thus, it clearly has brand recognition and would likely be the maker of the first tobacco someone tries, which could be something of a competitive moat. We also see that the company’s market share in cigarettes did go down, but that is a shrinking market, while its market share in the market for heated tobacco is actually growing, and that is a growing market. This is a good situation for the company to be in.

As is the case with many other tobacco companies, Philip Morris International boasts a rather impressive dividend yield. During the first quarter, the company declared a regular quarterly dividend of $1.17 per share, which works out to $4.68 annually. As is always the case though, it is critical that we ensure that the company can actually afford the dividend that it pays out. The usual way that we do this is by looking at its free cash flow. A company’s free cash flow is the amount of money generated by a company’s ordinary operations after it pays all of its bills and makes all necessary capital expenditures. Free cash flow is the money that is available to do things like paying a dividend to shareholders or paying off debt. It is typically calculated by subtracting capital expenditures from operating cash flow. In the first quarter of 2020, Philip Morris International had an operating cash flow of $10.090 billion and capital expenditures of $852 million. This gives the company a free cash flow of $9.238 billion. Meanwhile, the current dividend costs the company $7.161 billion. Clearly then, the company is indeed generating enough cash to cover its dividend with money left over as it does not operate in a particularly capital-intensive business. At the current stock price, Philip Morris International boasts an impressive yield of 6.52%.

In conclusion, Philip Morris International posted a very solid quarter in the face of the COVID-19 pandemic. This is not particularly surprising as the nature of this company’s products makes it very resistant to the current problems facing the world as they are highly addictive. With that said though, the popularity of smoking is clearly on the wane, but fortunately it has a new product that is seeing rising popularity that is making it much easier for the company to generate growth than price hikes alone would offer. When we combine this with the company’s impressive dividend yield, we see that this could be a good place to ride out the pandemic and the coming recession.