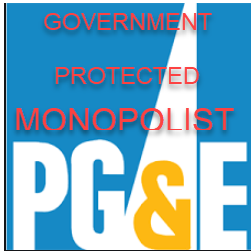 PG&E Corp.’s decision to shut off power to more than two million Californians this week represents a new reality: It now plans to pull the plug whenever its equipment threatens to spark destructive and potentially deadly wildfires, reports The Wall Street Journal.

The government is, of course, behind it. WSJ reports that California’s utilities now have regulatory permission to cut off power to parts of their service territories during strong winds to reduce the risk of their electric lines causing wildfires.

The problem is, of course, poor maintenance, improper equipment and failure to keep up with the latest technology.

PG&E provides gas and electric service to 16 million people, or roughly one in 20 Americans. It cut power for days this week to nearly 800,000 homes and businesses across 34 counties, the only U.S. utility to have ever initiated a weather-related shut-off of such size and duration. Because the average California household has 2.96 people, according to census data, the number affected likely exceeded 2 million, though PG&E has not offered a more precise estimate.

The company trails its peers in technology to track winds and isolate the areas where equipment is at highest risk of sparking fires. It is also running far behind on several of its most important safety efforts, records show, including this year’s tree-trimming campaign, which is less than 50% complete.

One death may have already resulted because PG&E turned power off to some customers at 3:00 AM on Wednesday. The family of the dead individual is blaming the power outage.

A Northern California man who relied on oxygen supply equipment was found dead just 12 minutes after PG&E instituted a power shutoff this week.

The family of Robert Mardis Sr., 67, said he was suffering from COPD and congestive heart failure, according to the Sacramento Bee. The El Dorado County Fire Department said Mardis was hooked up to his oxygen machine when they found him unresponsive.

The Mountain Democrat in Placerville first reported the death, saying that PG&E cut power to residents in Pollock Pines and the region at 3:30 a.m. on Wednesday, and that dispatch was made to a location where someone on life-saving equipment needed help. First responders arrived at 3:42 a.m., the El Dorado County Sheriff’s office said.

Fire chief Lloyd Ogan said firefighters entered the residence and found Mardis on the floor. Ogan said his crew tried to use a defibrillator and other advanced CPR methods, but none were successful enough to revive Mardis. Firefighters had to work with illumination from flashlights since there was no power in the home.

When PG&E announced plans to cut power this week, its website crashed and remained out of commission for two days as residents rushed to check whether they would be affected.

Contrast the government protected clowns at PG&E with the efforts of a southern California operator San Diego Gas & Electric.

SDG&E has installed 190 weather stations as well as segmenting devices on every circuit to dramatically reduce the number of customers affected during any given blackout throughout a 4,100-square-mile service territory roughly 6% the size of PG&E’s. On Friday, it had initiated a shut-off that affected fewer than 400 customers.

As I have pointed out before, there is a free market remedy to this problem: Pull PG&E’s monopoly protection and let other power providers compete for the very upset PG&E customers.

Or does California Governor Gavin Newsom want to prove he can make conditions in California just as bad as in Venezuela?