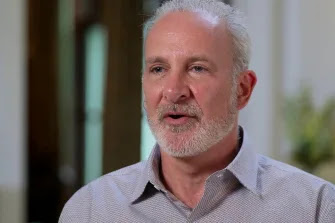 A Puerto Rico-based bank founded by Peter Schiff, the chief executive of Euro Pacific Capital, is being investigated for the non-libertarian crime of tax evasion and money laundering, The New York Times and The Age alleges in a new major profile article.
Schiff told MarketWatch via email on Tuesday that he planned to have a detailed response to the allegations later Tuesday via YouTube and said that he was preparing “to file a defamation lawsuit against Fairfax Media,” an Australian conglomerate that owns The Age among other media properties.

According to The Times, tax authorities from the U.S., Australia, Britain, Canada and the Netherlands, are raising questions about Euro Pacific Bank’s clients, who have been accused or suspected of using the Schiff-founded entity to explicitly launder money or evade taxes.

The Times reports that Euro Pacific has about 8,000 depositors, according to the company. It holds about $140 million in deposits. Note to The Times: $140 million is a laughably small size operation. Chase probably does that much money laundering in a single day, every day (except for Sunday).

Schiff owns a 45% stake in Euro Pacific, with the bank president, Mark Anderson, owning the remainder of financial institution. The newspaper said that the Internal Revenue Service has interviewed Schiff and Anderson.

Neither individual nor the bank has been charged or directly accused of wrongdoing, the reports says.

In an interview with The Age’s Australian “60 Minutes” affiliate, Schiff, walked out after the money laundering allegations were brought up and his wife then made a brief appearance.

Peter Schiff is adamant authorities won’t find anything to implicate the bank. After refusing to answer any more questions from reporter Nick McKenzie, he left the final word to his wife. #60Mins pic.twitter.com/Cz2GP8awsc