Peloton shares set high as users do twice as many workouts

Far more people than expected were spinning their wheels on Peloton bikes as they worked from home, sending shares of the fitness technology group to a record high in after-hours trading.

“Fuelled in part by the challenges associated with Covid-19, member engagement reached new highs,” Peloton told shareholders. Fitness subscribers logged an average of 24.7 workouts per month, versus just 12 a year ago, it said.

The company, which sells internet-connected exercise bikes and subscriptions to training sessions, said revenues in the three months ending June 30 grew 172 per cent from a year ago to $607.1m.

That beat Wall Street expectations of $583m and was well beyond the $500m-$520m range it projected three months ago.

The group said it “had expected demand to moderate” but the resurgence of Covid-19 in the US helped orders, exacerbating “the imbalance of supply and demand” and causing further delays for customers trying to get new equipment.

It projected between $720m and $730m of revenue in the quarter ending September, which helped to push shares up more than 7 per cent in after-hours trading to $94.62. 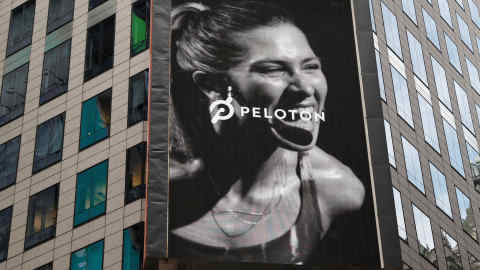 Peloton has been one of the biggest winners amid Covid-19, its stock climbing 200 per cent this year to give the company a valuation of more than $25bn.

The stock already hit a record earlier in the week after it introduced Bike Plus and Tread Plus, premium versions of its bike and treadmill equipped with bigger monitors that swivel. It also cut the price of its mainstay bike to $1,895 and launched a “more affordable” — albeit still $2,495 — treadmill.

Given its supply chain troubles, which have caused multi-week waiting lists, this launch was earlier than expected and caused Goldman Sachs to lift its 12-month price target on the stock from $96 to $110 — implying the stock could pedal 25 per cent higher.

Investors are “underestimating the long-term growth of Peloton as the current pandemic both steepens the adoption curve and accelerates the company’s progress along it”, Goldman analysts said on Wednesday.