Peloton, the maker of connected fitness bikes and treadmills, continued to benefit from the pandemic-fuelled at-home fitness boom in the September quarter, but its warning of “supply constraints for the foreseeable future” sent its shares lower.

The connected fitness company reported revenue of $757.9m in its first fiscal quarter, beating forecasts of $734.18m, according to Refinitiv, as more people working out at home bought its connected bike or treadmill and paid a monthly fee for live classes.

It posted net income of $69.3m, beating estimates of $36m. This compares with a loss of nearly $50m for the same quarter a year ago.

In the holiday quarter Peloton expects revenue to reach $1bn, and it projects the number of connected fitness subscribers to grow another 300,000 by the end of the year.

The New York-based group said it was experiencing “extraordinary demand” for its products but noted “extended delays” in shipments. Peloton warned that waiting times for orders of its new Bike Plus were likely to remain “elevated” for several quarters.

John Foley, chief executive, apologised for multiple quarters of supply problems, but said: “None of us could have predicted that we’d see all time spikes and Covid-19 cases in October, and the threat of new lockdowns in our global markets.” 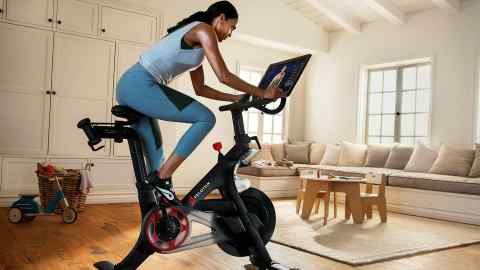 Subscription revenue grew to $156.5m, up 133 per cent from a year ago and accounting for more than a fifth of overall revenue. The average subscriber with a bike or treadmill logged 20.7 workouts a month, down from 24.7 in the past quarter but up from 11.7 a year ago. The percentage of subscribers who have kept using Peloton from 12 months ago was 92 per cent.

Peloton’s valuation has soared from $8.1bn at its initial public offering in September 2019 to more than $35bn — more than Ford, the carmaker. Trading was volatile after-hours on Thursday, with the stock swinging down 6 per cent, mostly erasing a 6.8 per cent gain before the close.

During the September quarter, Peloton launched Bike Plus, which features a larger screen through which users can access yoga and weights classes. It also reduced the price of its original bike and announced Tread Plus, a new treadmill available from late December.