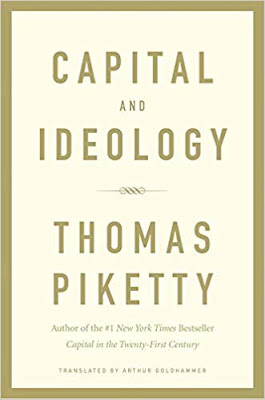 I wonder what this is about.

Krugman should have done the same but the too political Krugman did not.

He is making up for that misstep with his New York Times review of Piketty’s latest book, Capital and Ideology

In his new  review, Krugman starts off by telling us that no one read Piketty’s first book:

[P]eople who wanted to be well informed felt they had to have [it].

To have, but maybe not to read. Like Stephen Hawking’s “A Brief History of Time,” “Capital in the Twenty-First Century” seems to have been an “event” book that many buyers didn’t stick with; an analysis of Kindle highlights suggested that the typical reader got through only around 26 of its 700 pages. Still, Piketty was undaunted.

He then takes on Piketty’s latest:

His new book, “Capital and Ideology,” weighs in at more than 1,000 pages. There is, of course, nothing necessarily wrong with writing a large book to propound important ideas: Charles Darwin’s “On the Origin of Species” was a pretty big book too (although only half as long as Piketty’s latest). The problem is that the length of “Capital and Ideology” seems, at least to me, to reflect in part a lack of focus…

But while there is a definite Francocentric feel to “Capital and Ideology,” for me, at least, the vast amount of ground it covers raises a couple of awkward questions.

The first is whether Piketty is a reliable guide to such a large territory. His book combines history, sociology, political analysis and economic data for dozens of societies. Is he really enough of a polymath to pull that off?

I was struck, for example, by his extensive discussion of the evolution of slavery and serfdom, which made no mention of the classic work of Evsey Domar of M.I.T., who argued that the more or less simultaneous rise of serfdom in Russia and slavery in the New World were driven by the opening of new land, which made labor scarce and would have led to rising wages in the absence of coercion. This happens to be a topic about which I thought I knew something; how many other topics are missing crucial pieces of the literature?

The second question is whether the accumulation of cases actually strengthens Piketty’s core analysis. It wasn’t clear to me that it does. To be honest, at a certain point I felt a sense of dread each time another society entered the picture; the proliferation of stories began to seem like an endless series of digressions rather than the cumulative construction of an argument…

The bottom line: I really wanted to like “Capital and Ideology,” but have to acknowledge that it’s something of a letdown. There are interesting ideas and analyses scattered through the book, but they get lost in the sheer volume of dubiously related material. In the end, I’m not even sure what the book’s message is. That can’t be a good thing.