Hillary Clinton has jumped to third place behind Elizabeth Warren and Joe Biden on PredictIt as rumors of her entering the race for a 2020 presidential run continue to build.

Clinton is enjoying a bounce due to heightened speculation that she will run again as well as scandals surrounding Biden’s profiteering in Ukraine and claims Warren lied about being fired from a teaching job for being “visibly pregnant.” 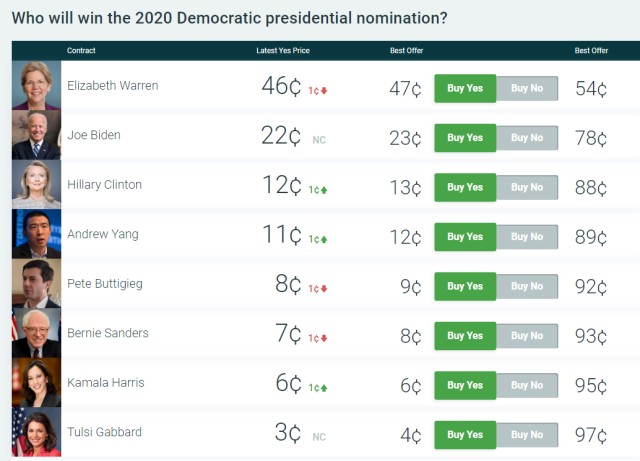 The odds of Hillary becoming the 2020 Democratic nominee amongst a poor field of candidates are also at their highest in months. 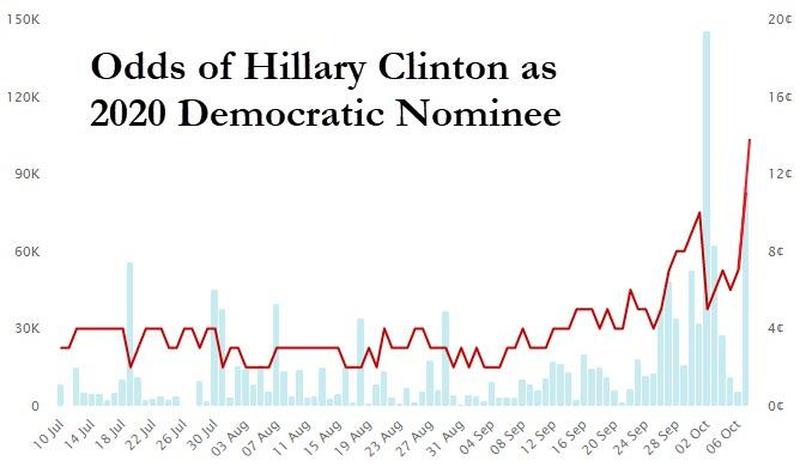 President Trump appears to be warm to the idea of going head to head with Clinton again, tweeting, “I think that Crooked Hillary Clinton should enter the race to try and steal it away from Uber Left Elizabeth Warren.”

I think that Crooked Hillary Clinton should enter the race to try and steal it away from Uber Left Elizabeth Warren. Only one condition. The Crooked one must explain all of her high crimes and misdemeanors including how & why she deleted 33,000 Emails AFTER getting “C” Subpoena!

Meanwhile, a Rasmussen poll has Trump and Hillary running “neck-and-neck” in a hypothetical rematch.

As we highlighted last week, during an appearance on Stephen Colbert’s show, Clinton announced she would not endorse any of the Democratic candidates, fueling speculation that she may yet enter the race.

During an appearance on Fox Business Network, Steve Bannon said Clinton was trying to find a way to wedge herself into the race.

“They think they have a weak field and they’re – it’s like in chess – they’re prepared to sacrifice a rook to take down a king,” he explained. “They will throw Biden away to get to Trump and hope Elizabeth or I even think Hillary Clinton or Bloomberg or some centrist comes in here.”

“She is running,” added Bannon. “She’s just trying to decide how to fit her way in.”