This morning, ConocoPhillips (COP) announced an agreement to acquire Concho Resources (CXO) in an all-stock transaction valued at a reported $9.7 billion. If approved by shareholders, the combination will make COP a Permian powerhouse with over 1.5 million boe/d of production. Combined, the two companies will have a long runway of shale acreage to exploit and a total resource base of ~23 billion boe. 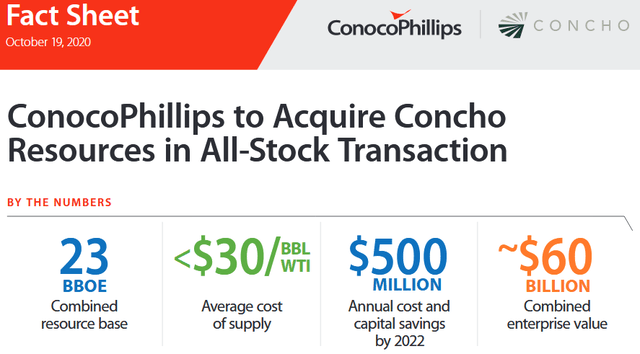 Terms of the all-stock transaction is for each share of Concho Resources common stock to be exchanged for 1.46 shares of ConocoPhillips common stock.

Including Concho’s $3.6 billion in debt at the end of Q2, the total transaction value is an estimated $13.3 billion, or $41.69/bbl per flowing boe based on CXO’s Q2 production level of 319,000 boe/d. On the high-side some would say, but the premium is arguably worth it considering CXO’s large drilling inventory of tier-1 Permian acreage (550,000 net acres in the core of the Delaware and Midland Basins).

However, note that Concho’s proved producing reserves totaled 745 million Boe, or 74% of total proved reserves. That’s a high percentage and bodes well for the acquisition’s value and the long runway of Permian acreage that can add additional proved reserves simply by drilling out CXO’s 550,000 total net acres.

At the current dividend rate of $1.72/share annually, the additional estimated 285,116,100 shares to be issued to CXO shareholders means an additional estimated $490.4 million annual dividend obligation. Note that during Q2, CXO generated $238 million of free cash flow. On an annualized basis, that is an estimated $952 million, which will easily cover the dividend obligation of the newly issued COP shares. This is likely one reason COP only raised the dividend by a measly penny a share in October despite sitting on a near $7 billion cash hoard. The company obviously knew it was near a deal.

Taking a step back and viewing the big picture for a moment, note the $13.3 billion transaction (including debt) is roughly what COP sold the majority of its oil sands business to Cenovus (NYSE:CVE) for back in 2017 (See COP: Sells Majority Of Oil Sands). So this was a major – and very beneficial – strategic move by the part of COP management as they effectively traded in high-cost, low-margin oil sands production (hemmed in by a lack of adequate pipeline capacity out of western Canada) for low-cost, high-margin short-cycle Permian shale assets that are cash-flow positive at $40/bbl WTI and that can be economically shut-in during periods of low prices. 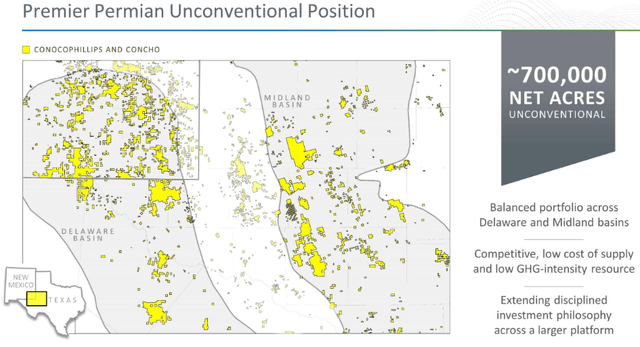 While the $13.30/boe price tag for CXO’s 1 billion boe of proved reserves, and the per-flowing-boe of production price-tag of an estimated $41.69/bbl may appear high at first glance, those metrics don’t tell the whole story because they don’t fully value or take into account:

Meantime, annualizing CXO’s Q2 FCF shows Concho’s assets and production – unlike the ill-fated Exxon (XOM)/XTO acquisition – will easily fund the dividend on COP’s re-issued shares to fund the all-stock transaction. In addition, the merged companies expect to save $500 million per year in cost and capital efficiencies.

The bottom line is that this combination makes strategic sense for both companies, would make COP a major player in the Permian, and would give the company a 23 billion boe resource base with an average cost-of-supply less than $30/boe. Whether or not that is enough to make COP thrive in an era of energy abundance remains to be seen.

Meantime, the question remains: in consideration that both COP and CXO are FCF positive at $40/bbl WTI (i.e. now), and that COP will retain its investment grade balance sheet post the acquisition, when will COP management decide to return substantially more of its ~$7 billion cash hoard to long-suffering shareholders?

NOTE: as I wrote in my last article on the COP/CXO tie-up, the market appears to be supportive. As I write/submit this article, in pre-market trading, COP is trading up 1.5%+ and CXO is trading up 2%+.

Disclosure: I am/we are long COP XOM. I wrote this article myself, and it expresses my own opinions. I am not receiving compensation for it (other than from Seeking Alpha). I have no business relationship with any company whose stock is mentioned in this article.