Welcome to Orchid’s Palladium Weekly report, in which we discuss palladium prices through the lenses of the Aberdeen Standard Physical Palladium Shares ETF (PALL).

PALL has underperformed our friendly expectations, suggesting that the deterioration in the fundamental outlook caused by the depression in the automotive sector is greater than we initially thought.

That said, it’s worth noting that palladium has proven to be the most resilient among its precious metals complex since the start of June. 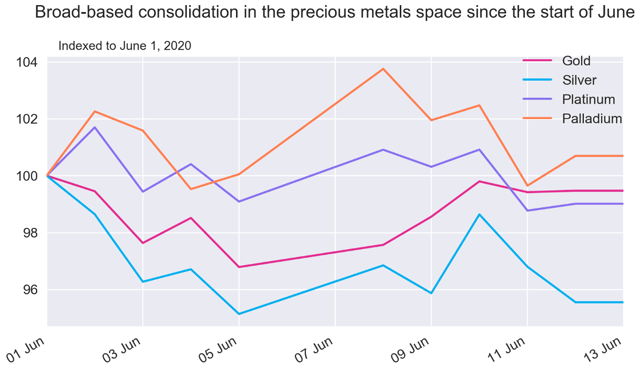 Given the demand profile of palladium, palladium prices behave relatively better in a risk-on environment. In contrast with other precious metals, palladium does not get much of safe-haven demand.

Because investors are willing to reassert upside exposure to risk assets, palladium indirectly benefits from this shift in investor behavior.

We think that PALL will rebound strongly in Q3, due to a rebound in automotive demand and positive price seasonal patterns. 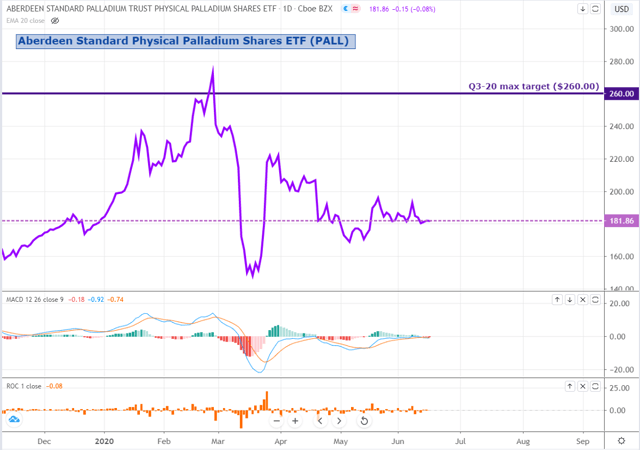 For investors seeking exposure to the fluctuations of palladium prices, PALL is an interesting investment vehicle because it seeks to track spot palladium prices by physically holding palladium bars, which are located in JPM vaults in London and Zurich. The vaults are inspected twice a year, including once randomly.

The Fund summary is as follows:

PALL seeks to reflect the performance of the price of physical palladium, less the Trust’s expenses.

READ ALSO  Macro-financial crises: Impeding the rush for the exit

Liquidity conditions are poorer than that for platinum. PALL shows an average daily volume of $3 million and an average spread (over the past two months) of 0.33%. 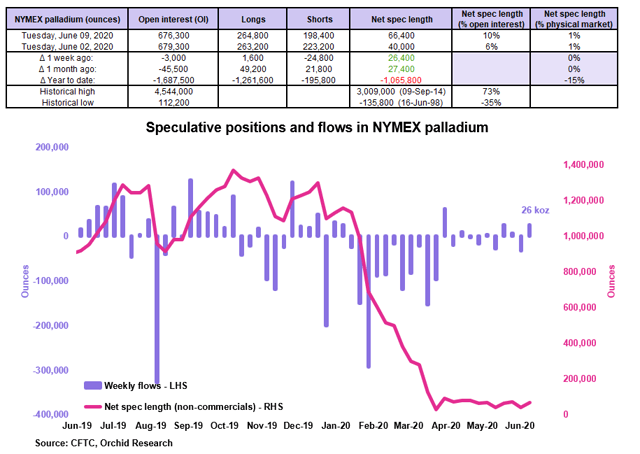 The speculative community raised its net long position in NYMEX palladium by the equivalent of 26 koz in the week to June 9, according to the CFTC.

The net spec length has been little changed at a very low level since the start of Q2.

It seems that the speculative community is completely done with its selling. We do not expect speculators to build fresh shorts considering the punitive backwardation in the NYMEX palladium curve.

As a result, we argue that from a positioning standpoint, the risk-reward for being long palladium is largely skewed to the upside.

Implications for PALL: We think that the speculative community could jump back in on the long side of the palladium futures markets by the end of the year. This would push the NYMEX palladium spot price strongly higher, thereby exerting upward on PALL. 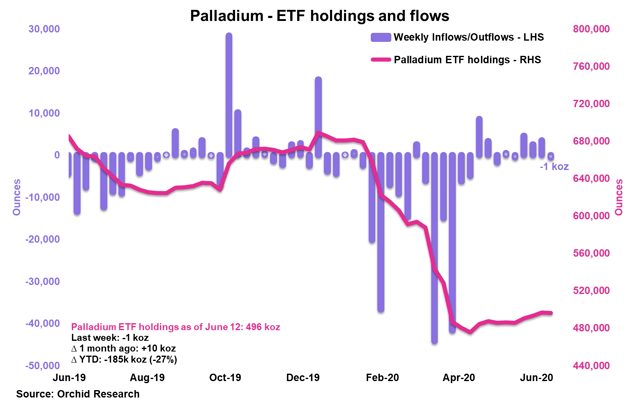 ETF investors left their palladium holdings essentially unchanged in the week to June 12, according to our estimates.

ETF holdings have stabilized and picked up slightly since the start of Q2. We view the rise in palladium ETF holdings as a sign that the palladium market is more balanced than last year.

Palladium ETF flows do not primarily reflect investor sentiment; rather, they reflect the degree of tightness in the market. When the market is tight, palladium price rise to a level that induces ETF holders to take profit and deliver the material to the market, which, in turn, eases the physical tightness.

It’s worth stressing the fact that palladium ETF holdings are historically very low, meaning there is not a lot of “cushion” in case of a renewed tightening of the palladium market (probably not until next year).

Implications for PALL: Because we view the recent increase in palladium ETF holdings as a sign of stronger supply availability, we do not think it is necessarily supportive of the NYMEX palladium price and thus PALL.

PALL has underperformed our bullish expectations, despite the return to the risk-on mood in the financial markets. In our view, this reveals the extent to which the fundamental backdrop has deteriorated in response to the COVID-19 crisis.

Nevertheless, we continue to think that a rebound in automotive demand for palladium will occur in the second half of the year, pushing palladium prices higher. This, in combination with a positive price seasonality in Q3 and an extremely light spec positioning, should push PALL strongly higher next quarter.