Palantir to Wall Street: we are not like other tech companies

Palantir, the data analytics company whose work on counter-terrorism has made it one of the Silicon Valley’s most controversial tech concerns, has sought to draw a clear line between its own business and what it dismissed as the “idiosyncrasies and excesses” of the rest of the valley, as it announced plans for a stock market listing.

However, the details of the filing announced on Tuesday also revealed an exaggerated version of the very characteristics that often make new Silicon Valley listings controversial on Wall Street.

It is still reporting huge losses, despite being in business for 17 years. It has also used a complex, three-class share structure to all but guarantee the long-term control of the three founders of the company, among them Peter Thiel, a founder of PayPal and venture capitalist who was the most prominent tech industry backer of Donald Trump’s 2016 presidential campaign.

The details came in a previously confidential regulatory filing that it made public on Tuesday night, laying the groundwork for its shares to start trading through a direct listing in the coming weeks.

The move came the day after three other US tech companies revealed their own listing plans and follows a boom in tech stocks as investors have turned to the sector as a winner during the pandemic.

In a letter outlining Palantir’s principles Alex Karp, chief executive, tried to turn the thing that has been seen as one of company’s main liabilities into an asset: its closeness to the national security establishment and involvement in controversial Trump administration policies, such as border security.

He did it by contrasting the company to the consumer internet groups that rely on personal data to power their businesses, even though they have little in common.

“The engineering elite of Silicon Valley may know more than most about building software. But they do not know more about how society should be organised or what justice requires,” he wrote, adding: “We seem to share fewer and fewer of the technology sector’s values and commitments.”

Palantir was set up in the wake of the 9/11 attacks in the US to create software to fight terrorism. More recently it has extended its business to the corporate sector, though it still has a heavy reliance on government customers, who accounted for 54 per cent of its business in the first half of this year, up from 45 per cent the year before.

In a sign of how the controversy from the company’s national security work could hold it back, Palantir warned in its filing that the secrecy of its operations might lead to inaccurate information spreading about it on social media — something it said could drive customers away.

Along with its controversial work for governments, some company insiders have worried that its business model could put many investors off. Rather than simply selling software — a type of business that is enjoying huge popularity on Wall Street, as businesses and consumers turn to online services during the coronavirus pandemic — Palantir’s business involves close involvement from engineers to shape individual projects, adding to its costs and hurting profits. As a result, it remains chronically unprofitable.

The company’s revenue grew by nearly 25 per cent last year, to $743m. But after spending 61 per cent of that on sales and marketing, it registered an after-tax loss of $567m, an improvement of 2 per cent from the year before.

Despite the losses, Palantir sought to show that its underlying profitability is rapidly improving, relying on the sort of non-standard measure of financial performance that has been used by other lossmaking tech companies, including Uber. 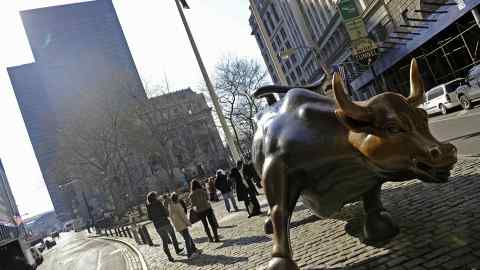 Palantir’s three-tier share structure echoes that of Google, which has also used three classes of stock with different voting rights to guarantee control will remain with its founders. In Palantir’s case, Mr Thiel, Mr Karp and Stephen Cohen are the equal beneficiaries of a trust set up to hold all the Class F shares in the company, giving them 49.99999 per cent of the votes, even if their combined holding falls to only 1m shares from its present 470m.

The filing comes a day after three hotly anticipated Silicon Valley companies shared detailed plans to list. Snowflake, a data analysis platform, was the largest of the three and could fetch a valuation of up to $20bn. Asana, a business software group, and Unity, a video game technology supplier, have also received billion-dollar valuations in recent years.

The rush to market comes after a record-breaking run for US equities fuelled by white-hot demand for tech stocks.