Palantir goes public but founders will have control for life

When shares in Palantir Technologies start trading publicly on Wednesday, it will mark the end of an unusually long, 17-year journey to Wall Street for the controversial company built on supplying data analytics to the national security establishment.

But a last-minute flurry of warnings and amendments to its convoluted voting structure in recent days has made the process seem anything but orderly.

In a filing with the US Securities and Exchange Commission less than two weeks before the listing, Palantir spelt out a barrage of new warnings about the effects of an unusually complex arrangement designed to leave control in the hands of three founders — Peter Thiel, the venture capitalist who came to wider attention after becoming Silicon Valley’s most outspoken backer of Donald Trump; Alex Karp, chief executive; and Stephen Cohen, president.

Then, three days later, another amended filing explained for the first time how the founders could redesignate some of the company’s shares whenever they wanted, allowing them to “unilaterally adjust” their voting power.

That was not the end of it. Hours later on the same day, came a further filing: the provision was gone.

The twists and turns in Palantir’s official disclosures have highlighted controversial governance arrangements that go to even greater lengths than usual to entrench the control of the company’s founders. But Wall Street’s current appetite for fast-growing technology companies means investors are more than willing to overlook the fact that the shares they buy will not give them any control.

It creates an utter lack of accountability to the investors. This is a classic example of irrational exuberance

“If a company has a hot product or service, unfortunately, there will probably be enough people willing to look the other way on governance policies,” said Jim Tierney, a fund manager at AllianceBernstein. “Hopefully behaviours change over time . . . but I would not hold my breath.”

Late on Tuesday the New York Stock Exchange set a reference price for Palantir’s shares — a rough guide to where they could start trading — of $7.25. That is at the low end of the $4.17-$11.50 range the shares have been trading at in the private market since the end of June, and would give the company a market capitalisation of about $11.7bn.

Its peak valuation in the private market hit $20bn five years ago, before falling back on concerns that the company should be valued more like a consultancy than a software concern.

Even Palantir admits that some of its provisions are “novel” and go “significantly” beyond the normal steps companies take to keep control in the hands of their founders after they go public.

For instance, the founders would keep control even if their combined stake fell to only about 6 per cent — considerably lower than at other companies.

Also, given the complexity of the share structure, Palantir warns that if its founders do not personally provide it with details of their holdings, it cannot even be sure they will not have more voting power than they are entitled to.

“It creates an utter lack of accountability to the investors,” said Charles Elson, a professor of corporate governance at the University of Delaware. “This is a classic example of irrational exuberance.”

At the root of Palantir’s convoluted voting arrangements is a desire by the founders to retain more control than they could under a more typical dual-class share structure.

Companies looking to entrench founder control usually issue a special class of stock that carries 10 times as many votes as other shares. But at Palantir, the supervoting stock — known as B shares — has been spread much more widely than just the three founders. As a result, the three, who own just under 30 per cent of the total shares, control about 40 per cent of the votes between them.

To further boost their influence, Palantir has added a second special class of stock, called F shares, owned by the three founders through a trust. This is guaranteed to leave them with at least 49.99999 per cent of the total votes — a level the company says effectively gives them full control over the most important decisions.

However, further explanations released by the company in recent days have made clear that the picture is considerably more complex even than this. 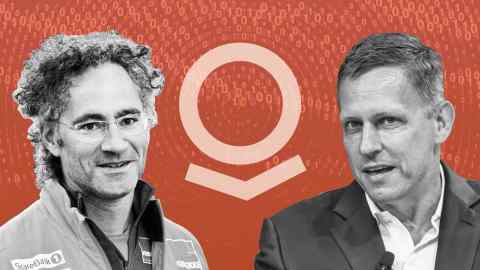 In a filing on September 18, Palantir pointed out that combined votes of the founders could go even higher if one or more of them opts out of the voting trust. If Mr Thiel votes his shares alone, for instance, the combined control of the three could increase to 65 per cent.

Mr Karp has sought to set Palantir apart from other Silicon Valley companies, which he claimed had outpaced the new forms of political control needed to restrain them. Some of Palantir’s critics say there is less to separate the company from the rest of the tech industry than he suggests.

The company’s voting arrangements are “not substantially dissimilar from the unequal structures found at the companies from which Mr Karp passionately seeks to distance Palantir”, according to Amy Borrus, head of the Council of Institutional Investors.

The shareholder representative group wrote to Palantir earlier this month calling on it to set a seven-year limit to its distorted voting.

Several tech companies that have gone public recently have agreed to such limits — though data compiled by the CII shows that the time limits they have set on the period of founder control have been creeping up. They include Slack and Peloton, whose founders will have control for 10 years, and Zoom, with 15.

By contrast, Palantir’s tilted voting structure is set to stay in place until the last of its founders dies. The youngest, Mr Cohen, is 37, meaning that control of Palantir — which has said it wants to become the “default operating system” for US government data — could still be in founder hands many years from now.

Meanwhile, the task management software app Asana, which will also have its public debut alongside Palantir on Wednesday, had a reference price set at $21 a share.