PagSeguro (PAGS) ended its fiscal first quarter with solid results showing strength across active merchants, TPV, revenues and cash on hand. As President Bolsonaro pushed economic reopening rapidly, PagSeguro should see more growth within active merchants and TPV in its upcoming results, as consumer confidence and retail sales began to recover with reopening. But even with that rebound, PagSeguro has made some strategic partnerships that should benefit long-term growth. 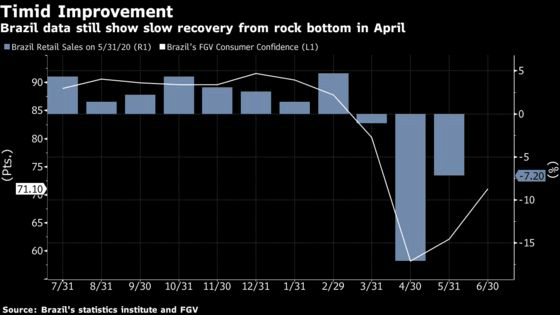 Brazil’s economic situation is not recovering as rapidly in a retail sense as we had seen here in the US, but it has still recovered after April’s bottom. May’s rebound “has already lost steam in June” according to central bank director Fabio Kanczuk. So as “business owners who are trying to resume operations have found, fears of getting the virus will keep many customers at home even if they reopen stores.” Consumer confidence is inching higher, but still below retail sales; if consumer confidence rises back to old levels, retail sales could be pushed higher from a physical store standpoint as e-commerce sales have jumped significantly.

PagSeguro is mainly involved in micro and small merchants from its payment processing solutions [PoS] segment. But “small business owners are not the only ones that have been slow to revive demand amid the pandemic” – Brazil mall operator BR Malls Participacoes witnessed “vehicle flows and sales were down 50% compared to pre-virus levels, and that shoppers are spending less time in [the] company’s locations.

As a whole, merchants across the board have been witnessing more consumer fear corresponding to lower spending. Although the slowed recovery in both retail sales and consumer confidence has led to lower spending, and while that could be seen as a negative driver of growth for PagSeguro, it goes both ways. PagSeguro target market of micro and small merchants are most likely more reliant on sales, regardless of whether the overall amount of sales is lower than before the pandemic, but because the amount of sales is above zero for those that have been able reopen.

PagSeguro arguably still had a tough quarter, as April proved to be very difficult, but tailwinds from recovery should shine positives through to growth rates. Revenues could come in quite low due to seasonality as well as the record plunges in consumer confidence and retail sales, however, PagBank user could shine, as PagSeguro is reinforcing its ecosystem digitally with more partnerships since Q1.

The digital ecosystem that PagSeguro offers is already quite diverse. PagSeguro offers online checkout processing similar to PayPal (PYPL) and allows payments through links (shareable through text and social media), apps, or online on sites, and is able to power most Brazilian cards as well as those like Mastercard (MA) and American Express (AXP); there’s the partnership with Shell to offer cashback for vehicle fueling, with Cabify to allow frequent deposits and payments through PagBank, with Bolsa Merenda stimulus from Minas Gerais and an added bonus if using PagBank; there’s PagPerto’s virtual shopping extension using geolocation, and PagHealth’s discounts for health related things. For more overview about the digital ecosystem as well as the different PoS technologies and Q1 results, read “PagSeguro Is The Top Pick For A Faltering Brazilian Economy.”

Those were all announced previously; however, there have been more announcements of partnerships, acquisitions, and features recently, all within PagBank.

The public transportation Bilhete Unico system will now be able to be refilled and used through the app, “reduc[ing] lines in ticket counters of buses, subway, and train stations, fostering contactless transactions.” Roldao Atacadista also joined forces with PagBank, allowing users to search for the nearest food store, purchase through QR and receive 10% cashback.

PagBank partnered with TikTok to allow users to “receive their balances safely and quickly, but also to [access] all services offered in the PagBank digital account,” which has the possibility of adding thousands/millions of users to the PagBank ecosystem.

It also entered an agreement to purchase ZYGO, a CRM provider that “enables micro, small and medium sized merchants to acquire, engage and grow their customer base by offering customized marketing and loyalty programs and providing consumer insights and analytics.”

PagBank also is considering a potential acquisition of Wirecard Brasil (OTCPK:WCAGY) for a reported R$400 million, as it tries to fend off interest from Fiserv (FISV); this could boost the payments segment, but it’s too early to say as no deal has been completed.

All of the new announcements show that PagBank (and PagSeguro for that matter) is committed to expanding its digital ecosystem and bridging as many gaps as possible between physical activities and digital payments; while it is harder to do with PoS – of which PagSeguro offers discounts and other incentives – the digital ecosystem growth is promising. Offering cash back for services like grocery shopping, taxiing, and fueling vehicles, while also allowing full service features of payments through links, etc., banking, transportation, and more, will attract and retain customers by the ease and scope of what is offered.

With the steps that PagSeguro has taken, its valuation still looks relatively cheap when compared to peers. While PagSeguro is still small compared to Square (SQ) and PayPal (PYPL), it is not valued to such astronomical forward earnings, even as earnings are projected to double to R$8.91 in 2022 from 2019’s R$4.46. PagSeguro is trading at ~48x time forward GAAP earnings, and while still a hefty valuation, is minute compared to PayPal’s 73x, Square’s 274x (non GAAP), and StoneCo’s (STNE) 101x multiple. Across the board, peer multiples suggest that PagSeguro could be undervalued compared to its ‘fairly valued’ peers, or that PagSeguro is fairly valued against its overvalued peers.

Although FX rates could dampen the share price performance, growth in TPV from aligning more partners, expanding the digital ecosystem, and bouncing back off of April’s record low consumer confidence and retail sales gives PagSeguro room to build upon in the upcoming quarters. This is likely one of the hardest quarters that the company will have to deal with, and earnings are still not expected to be much worse on a QoQ basis, suggesting headwinds from the shock to retail sales faded quickly. PagSeguro is still in its baby steps of growth – the company only saw R$31 billion in TPV (~$6 billion USD) compared to PayPal’s $220+ billion TPV in Q2, and has only 5.5 million merchants whereas Brazil’s population exceeds 220 million. The small business environment still provides incredible growth potential for PagSeguro’s PoS, but the digital ecosystem is taking huge steps forward as well.

Disclosure: I am/we are long PAGS. I wrote this article myself, and it expresses my own opinions. I am not receiving compensation for it (other than from Seeking Alpha). I have no business relationship with any company whose stock is mentioned in this article.