The coronavirus vaccine developed by Oxford university and AstraZeneca has proved effective in late-stage trials, giving another boost to hopes that the pandemic can be defeated.

The successful results follow the positive trials of rival treatments this month from Pfizer/BioNTech and Moderna, which have lifted global stock markets and signalled a possible end to lockdowns that have wreaked havoc on the world economy.

Under one dosing regime, the Oxford-AstraZeneca vaccine achieved 90 per cent efficacy, a measure of prevention of infection or severe disease. That required a half dose of the vaccine to be given followed by a full dose at least a month later. When the jab was given as two full doses at least one month apart, efficacy was only 62 per cent. The average efficacy, during trials in the UK and Brazil, was 70 per cent.

Scientists speculate that the lower first dose may have primed the immune system in a way that made it more receptive to the second jab, but more research will be needed to confirm this.

“All of us expected that two full doses would give the best response,” said Andrew Pollard, chief investigator of the trial at Oxford, said. He said the findings showed “that we have an effective vaccine that will save many lives”.

The new vaccine would be submitted for regulatory approval “immediately”, said the vaccine developers.

The results for the new treatment were better than the 50 per cent effectiveness sought by both the US Food and Drug Administration and the European Medicines Agency, which approve vaccines.

But they were less impressive than trials of Covid-19 vaccines from Pfizer/BioNTech and Moderna, which showed effectiveness of close to 95 per cent in their interim results.

London-listed shares in AstraZeneca lost 1.6 per cent in morning trade. Adam Barker, an analyst at Shore Capital, said this was probably an effect of the market comparing the trial data with previous results.

“In reality, if the vaccine is 70 per cent effective, that’s absolutely fine. It’s the most accessible of all the vaccines and so will still be used widely if approved,” he said. “Before the trials, we’d have expected an efficacy around 60 to 70 per cent. Plus it could be 90 per cent with one of the dosing regimens.”

The Oxford-AstraZeneca jab became the great hope of British science and during the summer was regarded worldwide as the leader in the Covid-19 vaccine race, as its clinical trials proceeded first in the UK and then across the world. AstraZeneca plans to enrol up to 60,000 trial participants globally, more than any other vaccine candidate.

But Oxford fell behind Moderna and Pfizer/BioNTech when its trial was halted following the illness of one participant, which was not found to have been caused by the vaccine.

Matt Hancock, the UK’s health secretary, said vaccinations could start next month, with the bulk of the rollout taking place after January, subject to regulatory approval. Britain has secured 100m doses of the jab.

Pam Cheng, AstraZeneca vice-president of operations, said at least 4m of the UK doses would be available by the end of this year and 40m by the end of March — a lower first dose would further increase availability.

The Pfizer/BioNTech and Moderna vaccines are sold at profit and much of their projected supply for next year has been secured by richer nations. By contrast, AstraZeneca, along with Johnson & Johnson, has said it will sell its inoculation at cost to the world during the pandemic. J&J trials are continuing. 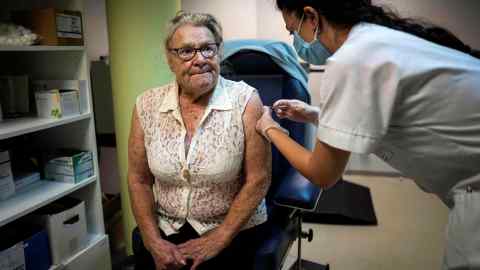 The jab is priced at about $3 to $4 a dose, supply deals suggest, a fraction of the price of other vaccines. The vaccine can be stored long-term at normal fridge temperature, between 2C and 8C; other treatments require a storage temperature as low as minus 70C.

AstraZeneca and manufacturing partners around the world, such as India’s Serum Institute, are targeting the production of up to 3bn doses next year. Depending on regulatory approval, a lower first dose regimen could make more doses available.

AstraZeneca has received approximately 3.2bn orders for its jab, according to data from the London consultancy Airfinity.

“This vaccine is more suitable for rollout in poorer countries because it only requires refrigeration,” said Ellen ‘t Hoen, director of Medicines Law & Policy, a research group. “They had the foresight to work with vaccine producers in developing countries early on.”

Suerie Moon, co-director of the Global Health Centre at Geneva’s Graduate Institute, said a key trait of the vaccine was that it was “funded, developed and licensed with global access as a central objective”.

Prof Pollard told a news briefing on Monday morning: “We have a vaccine for the world.”