Outfront Media: Undervalued And Positioned To Weather The Crisis (NYSE:OUT)

REITs come in all shapes, sizes, and forms and serve a multitude of purposes and needs. With REITs, one can gain access to cash flows that are generated from nearly every aspect of daily life, whether it be going to the grocery store (net lease and shopping centers), surfing online (data centers), or using mobile devices (cell towers). The REIT that I have today, Outfront Media (OUT), plays an important role in the physical advertising space. Lately, like many of its REIT peers, the company has come under pressure due to decreased consumer mobility. In this article, I intend to evaluate the company from fundamental and technical perspectives, and make a recommendation, so let’s get started!

A REIT Partner to Advertisers

Outfront Media is an outdoor advertising company with many prime locations spread across North America. Its corporate model is governed by what it calls “TLC,” which stands for technology, location, and creativity. In 2019, its 500K media displays reached 7 out of 10 Americans per week, equating to 16.6 billion weekly impressions across 70+ U.S. markets, and it’s likely that you have seen one of its billboards on your daily commute.

Throwing a wrench into all this are, of course, the key risks and challenges presented by COVID-19. In a so-called “normal” recession, the fortunes of Outfront Media would be tied to economic activity. However, in the COVID-19-induced recession, the company’s fortunes are tied to both economic activity and consumer mobility, as many office employees are now working from home. The drop in eyeballs on the city streets and highways undoubtedly hurts Outfront Media’s physical signage business model, with one of the most glaring examples being photos of empty highways in major metropolitan regions in the early days of the pandemic.

While the risks of a “second-wave,” or what some observe as a first wave that hasn’t ended, contribute to an elevated number of infections across the country, there are signs of a recovery in some major markets that initially bore the brunt of the infections. In addition, in an article published last week, reports suggest that driving in New York is rebounding faster than ridership on the public transit system. The logic behind this is that people would rather “socially distance” themselves within their own vehicle rather than share a crowded space on a commuter train, where the likelihood for a viral transmission is higher.

While this will impact the New York MTA investments that the company has made to the city’s transit system, management has guided for lower expenditures in that sector for the time being. In the meantime, this helps the company’s outdoor revenues, where it derives the majority of its U.S. Media Revenues. As seen below, the company derived 72% of its U.S. Media Revenues from billboards in the latest quarter, an increase from 69% of total last year. 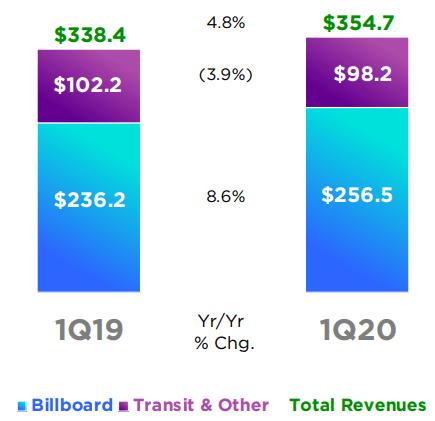 The company is also making the most out of the limited times when people do venture out of the house. According to its Smart Scout platform, the overall audience reached 80% of its pre-COVID levels, as seen below.

In addition, the company has identified thousands of displays that are better positioned in a COVID-19 environment, thereby opening new opportunities for those units, as management noted on the last conference call:

Our data has also enabled us to identify thousands of displays that have been able to retain or exceed their pre-COVID impression levels because of people’s changed living patterns. This has also opened new sales opportunities as people journey to and from the central business locations. This also kept our client conversations open and ongoing and we know that our longstanding relationships will continue to benefit both Outfront and our advertising partners.

Looking at the price performance, shares have dropped off a cliff since hitting $31 in February. It currently sits well below its 200-day moving average of $20.90 and has an RSI score of 51, indicating that it is approaching oversold territory, but not there yet. The price has recovered somewhat since the “sell-everything” phase back in March, and has had strong support at the level where it is currently trading at now. 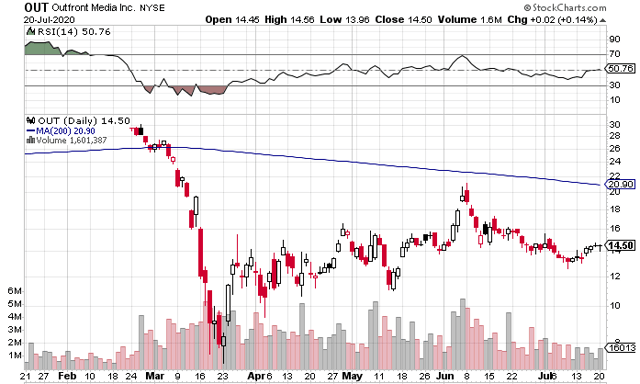 Turning to analyst estimates, the stock price currently sits below the average price target of $17.72 with an average consensus recommendation score of 2.1, indicating an outperform rating (score is based on a 1 to 5 range, with a 1 being a Buy rating). In addition, JPMorgan (JPM) recently reiterated its Overweight rating on Outfront Media on July 13th with a price target of $20, citing an increase to its estimate on quarterly OIBDA (operating income before depreciation and amortization) due to improved control of expenses.

The balance sheet appears positioned to weather difficulties, as Outfront Media has no significant debt maturities until 2024. It also boosted its liquidity position, by drawing $470 million on its revolving credit facility, which it intends to pay down with a recent $400 million bond offering at a 6.25% interest rate. It should also be noted that management issued $400 million worth of preferred equity as it wanted to maintain some balance sheet flexibility. While the preferred equity does carry a higher annual interest rate at 7%, I view this as a positive because unlike debt, which has a hard maturity date, preferred equity can be carried past the redemption date if management so chooses. 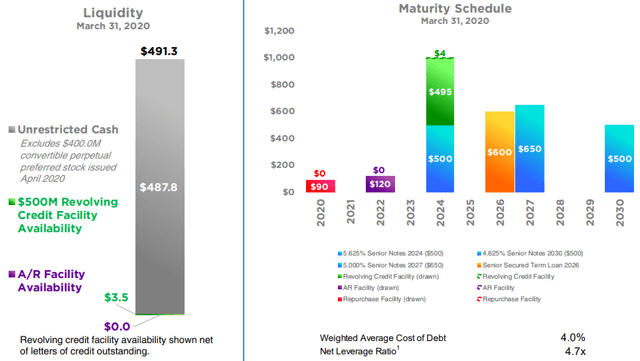 Lastly, the track record of growth in AFFO/share before the pandemic shows that management has executed well and reflects that its well-located assets are in position to benefit from an economic recovery. As seen below, AFFO/share has grown at an 8% CAGR since 2017 for a total 17% growth over the two years. While the dividend has been suspended, I believe it is a prudent move that provides management time to assess the full impact of the current situation and preserve liquidity. 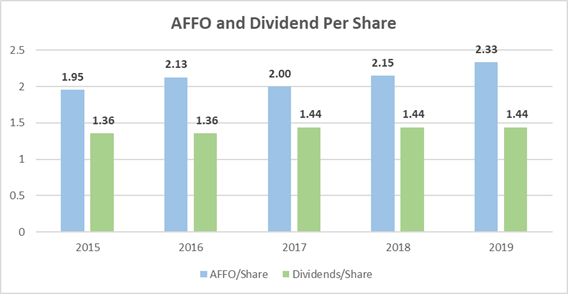 (Source: Created by author based on company financials)

Outfront Media operates a large number of well-located signage assets spread across North America. While COVID-19 has presented a set of challenges, the company’s assets have shown their resiliency, as it has been able to achieve 80% of its pre-COVID audience. In addition, management has shown its flexibility in ramping down its MTA investments to preserve capital, and has boosted liquidity through a bond offering, as other REITs have also done. While the dividend suspension adds a layer of uncertainty to income-oriented investors, I see it as being a prudent move that provides the company with flexibility to weather this crisis.

I have a Buy rating on shares at the current price of $14.50 and a P/AFFO ratio of 9.3. I have a price target of $17, which I find reasonable and which sits below the average analyst consensus price target. Lastly, I recommend appropriate risk caps in a well-diversified portfolio, as Outfront Media’s assets are more vulnerable to economic cycles due to their relatively short lease durations, and its sub-investment grade credit rating of B+ means that it has to pay higher interest rates on debt, as evidenced by its latest bond offering. 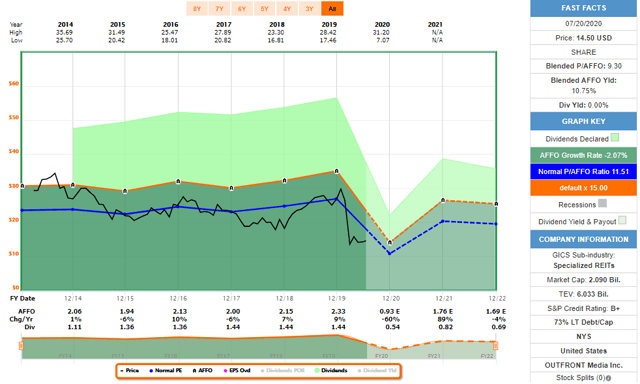