Outfront Media’s (OUT) stock has been a solid performer since the depths of the pandemic. I last visited the stock on July 21st, and had a bullish stance on it. Since then, the stock has posted a 32% return (as of writing), far outpacing the 11% return of the S&P 500 (SPY) over the same timeframe. Given the recent positive news on the vaccine, I remain optimistic on the company. In this article, I show what makes Outfront Media a worthy buy for long-term investors, so let’s get started.

A Look Into Outfront Media

Outfront Media is an outdoor advertising company with 512K total displays in prime locations spread across North America. Its corporate model is governed by what it calls “TLC,” which stands for technology, location, and creativity. In 2019, its media displays reached 7 out of 10 Americans per week, equating to 16.6 billion weekly impressions across 70+ U.S. markets, and it’s likely that you have seen one of its billboards on your daily commute. Last year, Outfront generated nearly $1.8 billion in total revenue.

As one would expect, Outfront Media’s business has taken a significant hit this year due to decreased consumer mobility during this pandemic. This continues to be reflected in the latest quarter’s results, with revenue declining by 39% YoY, from $462.5M in Q3’19, to $282.3M in Q3’20. AFFO/share had a sharper 70% YoY decline, to $0.19 per share in the latest quarter. That’s because Outfront has to maintain a certain level of operating expense (maintenance & SG&A) that cannot be dialed down at the same rate as the decline of revenue.

As seen in the YoY AFFO bridge below, the decline in adjusted OIBDA (operating income before depreciation and amortization) was partially offset by improvements on the expense side. 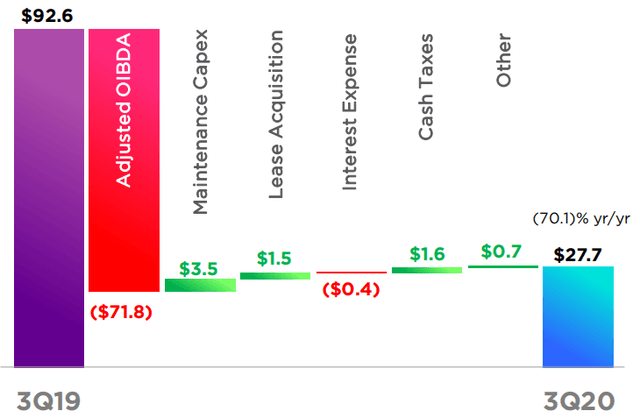 On the bright side, Outfront’s revenue improved by 21% sequentially, from $232.9M in Q2’20. Plus, Outfront has returned to profitability in the latest quarter, as it posted a ($0.15) AFFO/share loss in Q2’20. Plus, management made progress in reducing operating expenses, by 36.5% YoY, due to lower transit franchise, posting, maintenance and billboard property lease expenses. 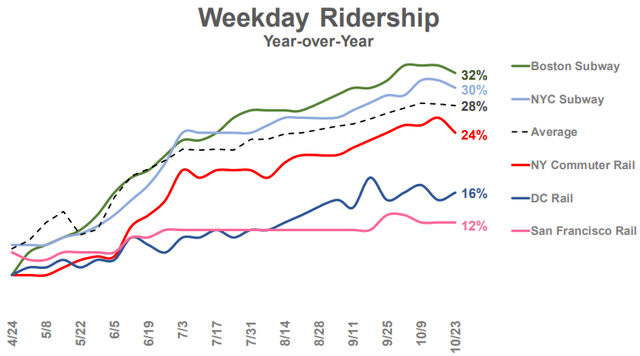 While near-term results are expected to remain weak, I’m optimistic in the long term, given the recent positive news on a vaccine, and the accelerated timeline for delivery, with the first immunizations set to start on the 11th or 12th of December. A 70% immunization rate across the U.S. is expected by May, which “would allow for true herd immunity to take place.”

Management is optimistic about the future and believes in the continued attractiveness of urban-living in a post-pandemic world. This is supported by large tech companies that are expanding their presences, as noted below during the recent conference call:

Contrary to some of the news flow, Amazon (AMZN) announced new office space in New York, Dallas, Denver, Detroit, Phoenix and San Diego. And it’s worth mentioning again that Facebook (FB) is making a major real estate investment in Midtown, Manhattan. Outfront has assets in all of these and other major markets. We are big believers in continued urbanization, and we are tracking these audiences to advertisers.

As national advertising recovers more generally, we’re likely to see a steeper growth trajectory in our bigger cities, similar to that to which we saw back in 2010. Transit and our major market performance drove our superior growth pre-pandemic and we are absolutely convinced that they will drive superior growth post-pandemic.”

Meanwhile, Outfront maintains plenty of liquidity, with $690M worth of unrestricted cash, and $498M in availability on its revolving credit facility, for a total of $1.189 billion in total liquidity. It has just $80M in debt maturing in 2021, and no other debt maturities until 2024. The net debt-to-EBITDA ratio stands at a reasonable 6.1x, and the weighted average cost of debt is not too high, at 4.5%.

Looking at share price performance, Outfront is currently trading at the low end of its pre-pandemic trading range. While I believe there will be continued volatility in the short term, I don’t see any reason why Outfront cannot return to its above-$20 trading range next year, especially given the aforementioned expectation of herd immunity by the May 2021 timeframe. Analysts seem to agree, with a consensus Buy rating (score of 4.3 out of 5), and an average price target of $20.17. 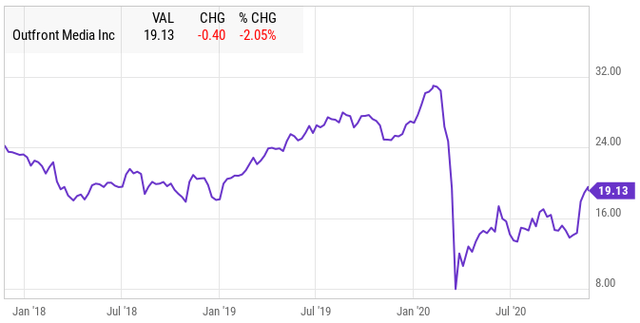 Outfront Media has felt a substantial impact from the effects of the pandemic this year. However, the latest quarter has shown a sequential improvement, and the company has returned to profitability. While I expect continued challenges in the near term, due to the recent surge in new daily COVID-19 cases across the U.S., I’m optimistic about the future, especially given the recent vaccine development, and the accelerated timeline for vaccine delivery.

In the long term, I expect continued urbanization in a post-pandemic world, as metropolitan cities continue to be an attractive hub for talent, given the recent expansion plans by large tech companies. Based on the aforementioned, and the light that I see at the end of the tunnel, I expect the company to return to growth mode in a post-pandemic world. Shares are a Buy.