The historical growth trajectory of Ormat Technologies (ORA) has taken a turn for the worse this year. The stock is down 20% YTD and is $25/share lower than where it was in February – and back to where it was three years ago: 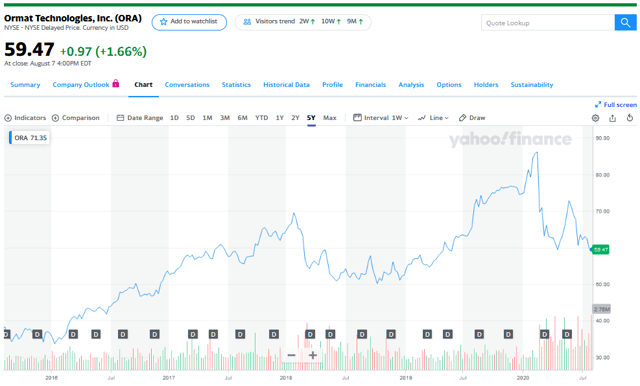 Is the stock a buy based on its potential to rebound from recent headwinds? Let’s take a look.

The Q2 Earnings report was issued last week and it clearly demonstrated that the company is in a bit of a quagmire: 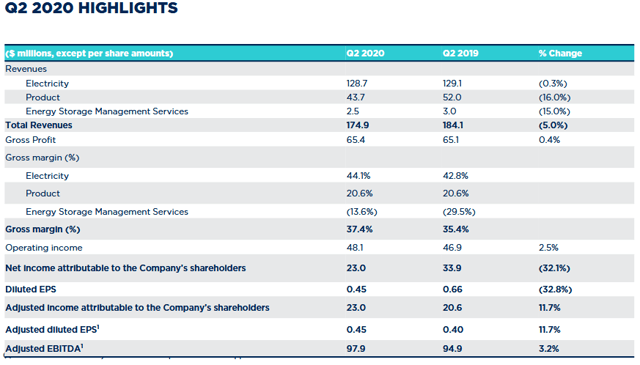 As can be seen in the graphic, top-line revenue growth was down 5% yoy. Although its largest segment, Electricity, was only down 0.3%, both the Product and Energy Storage segments saw double-digits declines.

Bottom-line results were helped by improved gross margins, which were up 2%. Year over year, G&A was down $2.9 million, while sales and marketing was up $1.6. Adjusted EBITDA was up 3.2% and the Electricity Segment was 93% of total EBITDA.

Perhaps more concerning than the financials was that overall generation was down 4.7% yoy, from 1.52 GWh to 1.44 GWh. That was mainly due to lower generation at OREG and curtailments at the Olkaria power plant due to the effect of COVID-19 in Kenya.

Meantime, the Puna geothermal plant in Hawaii is still not operating after volcanic lava flow knocked it out in May of 2018 (see Ormat: Volcanic Eruption Hits Q3 Margins). After more than two years, Ormat expects the plant to be back online by Q4 and will gradually increase operation to 29 MW by the end of the year. The plant was operating close to its 38 MW capacity before it went offline. The latest in-service expectation is a one-quarter slip as compared to previous guidance. Of the two new Puna wells drilled, one well was successful and one well was blocked after flow tests. So it will take more time and expense to unblock the well and clean it out.

As can be seen from the graphic above, in which I have added the previous guidance given during the Q1 conference call on May 11, the company has marginally reduced full-year guidance toward the lower end of previous expectations. Q1 guidance had already been lowered due to uncertainty around COVID-19 duration and implications, as well as due to the recent update in Puna.

The slide below takes a look at Ormat’s growth plan moving forward in the Electricity Segment: 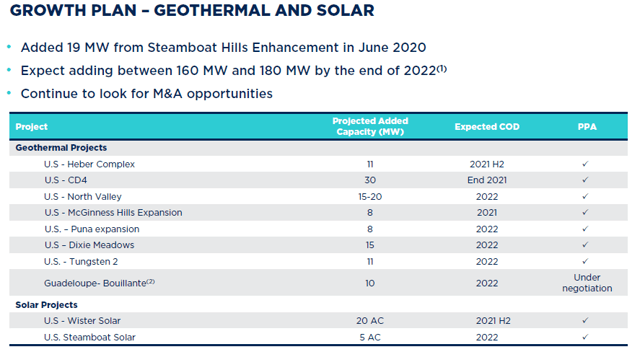 Note the lack of near-term project completions. Also, the midpoint of the 160-180 MW of Electricity Segment capacity expected to be added by the end of 2022 equates to only a 11% increase to the roughly ~1.5 GW.

To be sure, geothermal and REG power plants generate at a capacity factor of 87% and 74%, respectively. That is much higher than the typical capacity factors for wind and solar producers that are estimated to be in the range of 20-30%. As a result, geothermal energy is a more reliable source of electricity as compared to wind and solar (excepting the occasional volcanic eruption). That said, the economics for wind and solar have greatly improved over the past few years. Add in battery backup systems for wind and solar, and they are certainly a long-term competitive risk to further geothermal development. That appears to be the case now as well – Ormat only expects to grow its geothermal capacity by 13% over a two-year period. That’s not going to grow earnings and dividends at a very impressive pace. Secondly, as we have seen with Puna, operational geothermal is a more risky venture as compared to wind and solar, with far-flung operations in countries that may have riskier operating environments than developed economies.

READ ALSO  I Am 43% Genworth And 57% Fannie And Freddie Preferred (OTCMKTS:FMCC)

The growth prospects then shift to the other two segments: Product and Energy Storage. But not only did Q2 show double-digit declines in those segments, the small size of Ormat’s Energy Storage business will likely face tough competition from big competitors with deeper pockets. Tesla (TSLA) comes to mind, as does NextEra (NEE).

In addition, note that Ormat doesn’t have any wind arrays on its growth agenda. Wind should be an important and solid fourth leg of Ormat’s “renewable stool” (geothermal, solar, battery storage, wind), but for some reason wind doesn’t seem to be a priority for the company.

I originally began this article thinking I could recommend investors buy Ormat – which was the first geothermal company to catch my eye back in 2016. The stock was at $38 and growing at a nice clip. Since the stock dropped so much this year, I was hoping it was back in buy territory. But digging into the details, it looks like Ormat faces a number of challenges going forward. The growth profile in geothermal isn’t that impressive going forward (an estimated 13% of added capacity over the next two years). The law of large numbers may be catching up in that sector.

Meanwhile, the company is obviously trying to ramp up its battery storage business, but it is small, unprofitable so far, and likely faces stiff competition from larger companies with deeper pockets.

Perhaps COVID-19 is having an out-sized impact on Ormat, but operationally, the company hasn’t performed too well when it comes to bringing Puna back online, although I am sure there were huge challenges following the volcano eruption. Bottom line: the stock price decline looks rational in view of a slowing growth profile. For investors that own the stock, I’d hold onto it. For those that don’t, I would avoid it for now. I expected the ORIX stake would lead to higher growth (see Ormat: 22% Equity Stake by ORIX A Positive). That doesn’t seem to be the case.