Last month, I published an article on Oracle (ORCL) where I had laid emphasis on the balance sheet and highlighted the debt position as a concern for risk-averse investors. Therefore, my view concerning the possible acquisition of TikTok by the software giant will surprise many.

In this respect, Larry Ellison’s company has shown interest in acquiring TikTok, the video sharing company and is reportedly working with some US investors who already have stakes in ByteDance (BDNCE) the parent company, including General Atlantic and Sequoia Capital.

For those who may not be aware, the US president has accused the video sharing company of collecting data from American users and transferring them to China which would violate data protection rules. Subsequently, he issued an executive order to effectively ban TikTok in the United States, unless an American company buys the Chinese social media platform’s U.S. operations and this, by mid-September.

ByteDance, the owner of TikTok, has denied any wrong-doings.

My aim with this thesis is to show how a deal to buy TikTok makes sense for Oracle in its evolution from an enterprise-focused company to a more consumer-oriented one.

For this purpose, I consider some areas of synergy likely to be brought by an eventual acquisition and also how the data which will be obtained from TikTok’s platforms can be monetized by Oracle.

First, many analysts have been puzzled by news of Oracle’s interest as it is viewed as an enterprise company focused on the large corporate accounts instead of smaller customers or individual consumers.

This is not completely true as Oracle is no longer restricted to an on-premises database company now that it also offers its solution both through private clouds as well as the public cloud where any individual can set up an account.

As for its cloud business, despite registering a few recent highly publicized wins like Zoom (NASDAQ:ZM) and 8×8 (NYSE:EGHT), Oracle is still behind the likes of Google (NASDAQ:GOOG) (NASDAQ:GOOGL), Amazon (AMZN) and Microsoft (MSFT), and it has to compete aggressively to get bookings for its idle compute and storage resources.

Therefore, by adding TikTok and its millions of videos to its public cloud infrastructure, Oracle could significantly increase its user base and get returns out of idle capacity.

However, there is much more when data is considered.

In this context, the vertiginous growth of Google and Amazon has been largely powered by data they obtain from users accessing their search engines and online retail tools, respectively. These two companies are masters at analyzing data and identifying useful customer behavior which they automatically incorporate in their marketing strategies.

For Oracle, such a tool has been cruelly lacking.

While the company does not necessarily have a social media app that it could integrate with TikTok, it certainly has the ability through its advanced analytics and data-mining solutions to monetize the data from the video-sharing social networking service.

Also, Oracle’s data scientists have thousands of hours of experience training corporate teams to extract value from data and regularly use tools like data visualization, scenario modeling and mobile analytics.

These tools could be used to extract valuable information from TikTok.

Looking into the rear mirror, Oracle, with its 2019 acquisition of CrowdTwist, a cloud-native customer loyalty solution is already involved in monetization of data from loyalty programs aimed at identifying which customer segments to prioritize.

Exploring this further, with the loyalty management market projected to grow from $7.6 billion in 2020 to $15.5 billion by 2025 and TikTok’s unique user engagement model which lays emphasis on being at the forefront of the latest trends and movements, I see a lot of opportunities down the road.

Opportunities, but also risks are factors crucial in formulating a valuation.

According to some sources, TikTok has been valued at $50 billion, which seems to be on the high side. Also, this is the valuation for the company globally, including the US and India. In fact, most of the downloads have been effected in South Asia.

Now, since ByteDance is a private company, and there is no data about TikTok’s cash flow, I look at the revenue potential in order to provide a value.

Figure 3: TikTok gross revenue by month and most downloaded apps of 2019

In this context, TikTok being an active company operating in a dynamic market with others involved in near-similar activities, a comparison with peers is the best measure of value for the data.

Hence, I undertake a comparison with Snapchat (SNAP). The US company has a market cap of $31 billion with revenues for 2019 being at $1.7 billion.

TikTok claims that it has about 100M monthly active users (MAUs) in the U.S. Now, the MAUs of Snapchat stand at 46M according to research firm Statista. Hence, the Chinese company has more people using its platform.

At this stage, even taking half of TikTok’s MAUs puts it in front of Snapchat putting the company’s valuation in the $31 billion range. This is just an estimate which excludes debt and profitability metrics but at least provides a reference point.

Now, looking from the higher perspective and comparing with Instagram from Facebook (FB) and YouTube from Google, which also offer media-sharing features, one notices that there is still a lot of room for growth both for Snapchat and TikTok in terms of users and market cap. 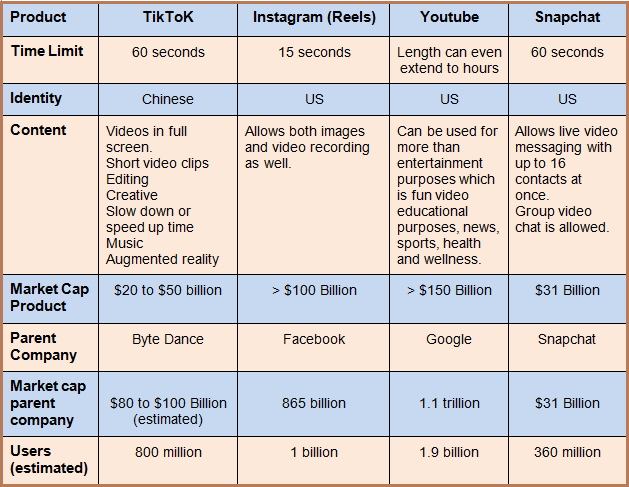 Also, when comparing the market capitalization of Facebook and Google (as the parent companies) with the $176 billion of Oracle, investors can now have a more precise idea of the potential of growth for Larry Ellison’s company through the acquisition.

Hence, in terms of figures, if used appropriately by Oracle, TikTok’s technology can generates considerable returns on top of Oracle’s $40 billion annual revenues.

Thus, making a rough estimate that TikTok’s sales is at the same levels as Snapchat at $1.7 billion (despite it having more users) and considering a doubling of the user base to the 1.6 billion mark after two years, 10% additional revenue can be envisaged for Oracle.

Additionally, considering growth derived from synergies (loyalty program, cloud, contextual intelligence, etc.), I come to a yearly revenue growth of at least 5% for Oracle after integration of the TikTok acquisition.

Moreover, according to Seeking Alpha, sourcing its update from TheWrap, Oracle has made a $20 billion offer comprising $10 billion in cash and $10 billion in Oracle stock to ByteDance. Interestingly, 50% of TikTok’s annual profits will flow back to its owner, ByteDance for two years.

This, according to me, is a reasonable offer, considering that, if Oracle has to build up such a video sharing platform all by itself, the cost involved will surely be more than $20 billion.

I now consider the risks.

The risks for Oracle as the acquirer of a social media tool will be increased scrutiny similarly to GAFA (Google Apple Facebook and Amazon) by antitrust regulators in the same way as Google is regularly scrutinized for its use of data it collects from its search engine.

Also, TikTok and ByteDance are preparing a legal challenge to the executive order banning transactions between the app company and parent ByteDance which could cast a shadow for the future.

Finally, since TikTok operates all over the world, including China through a different name, there may be problems implementing a ring-fence around the company’s data for American users. This may take some time.

However, in this case, the fact that TikTok has video and users’ data also located in a datacenter in Singapore, which is more of a juridically acceptable location for the US authorities, should help. 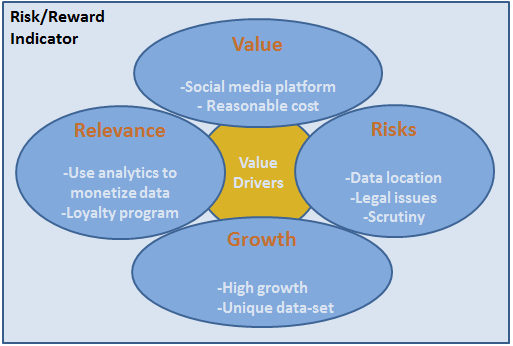 Therefore, in terms of risks/reward, there are more advantages to be gained by Oracle through this acquisition in its strategy to grow both horizontally and vertically.

Also, some investors may argue that Oracle does not have the capacity to execute. For that matter, Oracle has made 24 acquisitions in the last four years and still has a gross profit of 80% and operating margins of 36%. This shows that the company has been able to integrate acquisitions efficiently into its organizational structure.

On the other hand, this is one the software company’s largest acquisitions to date, and I see Oracle undergoing a major restructuring process with the creation of new business segments just like after the acquisition of NetSuite, a cloud-based ERP (Enterprise Resource Planning) software in 2016.

Finally, this is an open bid, and the honey (TikTok) is attracting other bees too.

Competing for the honey

There are a handful of contenders for the bid, including the mighty Microsoft (MSFT), Twitter (TWTR) and more recently, Softbank (OTCPK:SFTBY).

Twitter surely has an innovative business model which could make good use of a potential TikTok acquisition, but the company does not have the required financial firepower.

Microsoft, on the other hand with a market cap of $1.67 trillion, is a strong contender as it firstly has the capacity to monetize TikTok’s data and secondly, it can also grow its cloud business.

Third, the most important reason is that it lacks a solid video uploading and sharing application when compared to Google’s YouTube and Facebook’s Reels.

It must be mentioned at this point that Microsoft has a search engine (Bing) and advanced analytics capabilities.

However, there is some preliminary indication that some in the US administration favor Oracle as the acquirer.

With September just a few days away, the race for TikTok’s acquisition will soon reach its climax, with Oracle already having submitted its bid.

Oracle had a total debt of $73.7 billion as at the end of May. However, when considering the cash position of $43 billion, net debt was only $30 billion.

This is a high figure when taking into consideration the equity position, but Oracle does about $35 billion of share buy backs every year.

Figure 6: Balance sheet with all figures in millions of USD.

Therefore, in these circumstances, an acquisition of TikTok at $20 billion still makes sense provided that Oracle discontinues buying back shares.

Also, social media companies, especially those who already have a high customer base, enjoy a high level of profitability especially with the supporting infrastructure from Oracle already available.

Now, in context of the Fed being inclined on continuously stimulating the economy with lower rates, refinancing options are not limited.

Consequently, in view of the possible returns (5% of growth), the acquisition cost should not constitute a financial risk for Oracle.

Looking into the deal, while there has been no update on the geographies covered by the acquisition, there are some reasons to believe that in addition to the US operations, the Canadian, Australian and New Zealand businesses of TikTok may be included.

Also, Oracle’s acquisition’s history in the last three years shows that this is not an “out of the blue” acquisition done to please the US presidency but has the potential to strategically transform the company.

In some way, giving back part of the profits to ByteDance shows the intention of Oracle more to monetize TikTok’s data to promote Oracle’s growth in the same way as Google has done with its social media apps.

Finally, the risk/reward indicator favors the acquisition and Oracle will have a means to engage with users at a different level.