Oracle: It’s A Mixed Picture But Not That Bad (NYSE:ORCL)

I sold my Oracle (NYSE:ORCL) shares back in 2018 because of the accounts reporting format being changed. In June that year, breaking with tradition, the company lumped its cloud and on-premises revenues together instead of providing separate figures.

Now, at current prices, Oracle is 15% higher than the year 2018 levels, but appears ridiculously low when compared to competitors’ stock prices.

Moreover, there been no significant upside, despite news about the much publicized recent Oracle Cloud Infrastructure (“OCI”) contracts for Zoom (NASDAQ:ZM) and 8×8 (EGHT) which were previously on Amazon’s (NASDAQ:AMZN) AWS platforms.

I analyze the reason for this by considering the competitive positioning in the cloud industry.

I will then consider another revenue component, the Oracle Java Development Kit or JDK which allows developers to create Java programs that can be run on different desktop environments. JDK has to be purchased as part of OCI.

Finally, I will also deep dive into the US software giant’s enterprise resource planning (“ERP”) tools which should constitute growth drivers for the future as well as touch on the Exadata products.

Facing competition in the cloud segment

First, the overflow of optimism demonstrated by Oracle’s executives using words like “companies are looking to Oracle as an alternative to AWS and Azure” during the Q4-2020 earnings call is not aligned with the actual competitive position and interest shown by decision makers in the cloud arena.

Oracle trails both AWS and Azure in terms of score, but more importantly, also when considering the much lower number of reviews at only 61 compared to competitors’ figures of 400 and above.

Additionally, I confirmed both the score and reviews from ITcentralstation.com, which is another product evaluation website.

Therefore, while Oracle’s ratings for its cloud offering are not far behind its competitors, it is much less reviewed. This means that decision makers planning to invest in cloud solutions are showing less interest in the company’s product.

Also, looking under the hood for the high-profile contracts, it appears that, in the case of Zoom, only part of their applications especially those related to the high demand video meetings services have been migrated to Oracle.

Immediately during the crisis, our long-time partner AWS and its CEO Andy Jassy enabled us to meet this rapidly increasing demand. As our demand increased and we had limited visibility into the growth, AWS was able to respond quickly by provisioning the majority of the new servers we needed, so sometimes adding several thousands a day for several days in a row.

In April, our customer Oracle also showed a great support to help us. Not only did Larry Ellison record a great video to encourage our team to do the right things for the world, but also offered Oracle cloud support. We also provisioned a number of servers in the Oracle cloud as the demand for Zoom continued to increase. We are so grateful for their partnership and their responsiveness to provide capacity during this time.”

However, on the other hand, the very fact that the Work from Home (WFH) company migrated its services, even part of them to run on Oracle cloud is meaningful. In this respect, going back to the comparison (Figure 2), some of the customers who actually implemented Oracle’s product did mention their appreciation of the turnkey solution provided by the company, while AWS was viewed as just offering basic infrastructure-as-a-service.

Now, turnkey (complete) solution may have been the key factor prompting 8×8 to lease the full range of Oracle’s resources, including compute, network transfer, and storage. This is proving to be beneficial to the WFH company in terms of costs.

“Turnkey solution” or key product differentiation highlighting some unique features could be the key message Oracle executives should pass on instead of going for some head-on competition with AWS or Azure.

Justifying this further, CIOs are already aware of the capital expenditures savings possible through the use of the cloud, thanks to the likes of AWS, Google, and Microsoft. Logically, as a relatively new comer in the cloud arena, it may be in Oracle’s interest to focus more on the key differentiators.

This may be the way to increase sales which has been stagnating compared to the last fiscal year.

Sales figures show a stagnation of revenues at the $39 billion mark. Now, this can be explained partly by deferred revenue being up 3% due to COVID-19. However, moving forward, the company has also seen some drop-off in deals, especially in industries most affected by the pandemic.

Also, the fact that sales teams are mostly grounded due to stay-at-home measures could dampen any aggressive marketing campaign to win over customers of the well-established big cloud players.

Another blow for OCI could stem from the fact that it offers paid support for Oracle Java development kit (JDK) as from 2019. Thus, customers who wish to access critical bug fixes and security patches will have to buy a subscription license. Customers are, therefore, looking for alternatives.

Now, a survey commissioned by Azul Systems shows that “80% of Oracle JDK users are looking at other options, which include OpenJDK and OpenJDK-based offerings such as Azul OpenJDK, AdoptOpenJDK, and Amazon’s Corretto”. 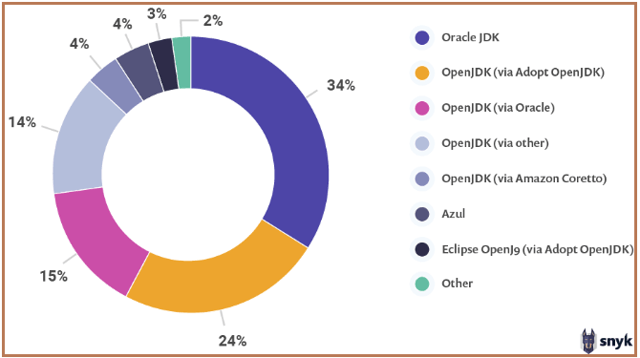 The company is also facing currency headwinds, and in terms of figures, this translates into a negative revenue impact at the tune of 1%.

The picture is not rosy, but Oracle has recently strengthened its product offering in ERP, an enterprise resource planning business where it has been present for more than ten years.

ERP is available through Oracle Fusion Applications (“OFA”), and the company is now the market leader way ahead of the likes of Microsoft and the once mighty SAP (SAP).

In fact, Oracle is gaining market share at the expense of SAP mostly because the way the latter chose to make its ERP solution accessible through the cloud did not work out smoothly. Oracle, on the other hand, chose a strategy consisting of rebuilding its entire suite from scratch, and this has proved to be more flexible in meeting customer requirements. 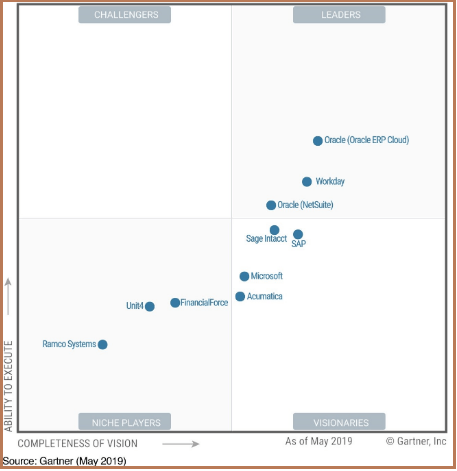 Revenues are here to prove this as Fusion apps which include ERP sales figures were up 31% in Q4-2020 as per Oracle’s executives during the earnings call.

Other strong points are its Exadata range of products being deployed as on-prem (on premises) solutions by financial institutions and telecommunication service providers as from this year. Here, customers are attracted to Oracle’s four decade of database applications expertise, plus again the fact that it offers a turnkey solution consisting of both hardware and software platforms to cater for organizational needs.

Despite stagnation of revenues, margins have improved as the company has been able to reduce operating expenses by 8% because of less travelling and reduced stay in hotels. In this way, $100 million have been saved in Q4-2020 compared to all the other quarters, translating into 42% of operating margin.

Therefore, with a stagnant but still stable revenue stream and some cost control, I now look as to the reason for the high debt.

The main reason is the high number of buybacks which, over the last 10 years, has reduced Oracle’s outstanding shares by nearly 40%.

Moreover, the software giant’s buybacks, a total of $5.2 billion in the last quarter and $19.2 billion in FY 2020, have contributed significantly to EPS growth. However, while being favorable for the stock price, they have spurred borrowing.

In this context, operating cash flow was $13.1 billion for the year ending May 31, while total debt stood at $73 billion. At a coverage of only 18%, it means that the company will take between 5 and 6 years to pay back its creditors, and this, assuming constant cash flow during this period and provided that no additional debt is availed.

Additional borrowing has prompted Moody’s service to downgrade Oracle’s senior unsecured rating to A3 from A1 in March of this year. The A3 rating, while lower than A1 is still positive and was allocated to Oracle mostly because of the stock repurchasing factor. 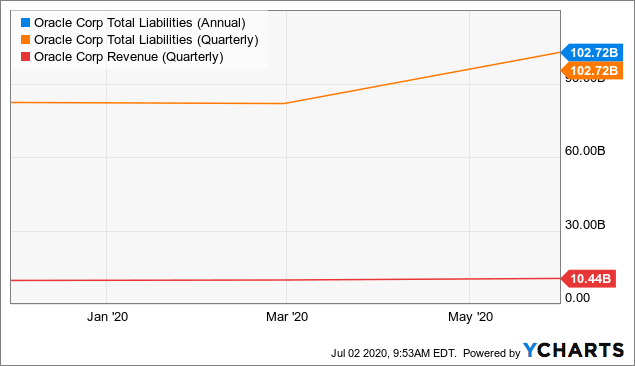 Finally, the company has a free cash flow of $11.6 billion and $3.1 billion paid as dividends for fiscal year 2020, which represents a cash payout ratio of only 26%. Oracle currently pays a dividend yield of 1.7% and has been consistently raised quarterly distributions since more than 10 years.

Firstly, on a comparison based on the P/E and EV/EBITDA metrics, the market seems to have already priced in Oracle’s pain points in the cloud business and high debt level, respectively. In this respect, EV which is the enterprise value includes both the market cap and debt components. Also, the company is trading at about 13x trailing price to cash flow.

Secondly, Oracle also has superiority in ERP with the segment seeing strong growth. Also, it has a large installed base of customers and derives considerable revenues from software support which is generally perceived as a more stable source of revenue.

However, that revenue stagnation with no clear remedial strategy from Oracle’s executive team is a concern for growth-focused investors.

This said, there has been no update for the risk-averse investor waiting for an indication as to whether there will be some limitation on the debt level.

Therefore, at a current $54-57 level and with a dividend yield of 1.7%, I consider Oracle to be more of a hold for shareholders than a buy for investors.

For my part, I will be waiting for the next earnings call for an update on deferred revenues, debt evolution, and most importantly, sales figures from the ERP business.

Till then, I will continue following Oracle’s reviews and stock price.

Disclosure: I am/we are long CSCO. I wrote this article myself, and it expresses my own opinions. I am not receiving compensation for it (other than from Seeking Alpha). I have no business relationship with any company whose stock is mentioned in this article.

Previous PostTeleworking is Not Working for the Poor, the Young, and the Women – IMF BlogNext PostThe 23rd International AIDS Conference – This year’s AIDS conference has brought snippets of good news | Science & technology