The new OPEC/OPEC+ production cut agreement is now a confirmed fact, the world’s leading crude producers (the United States excepting) have agreed to prolong the supply coordination mechanism that has been in place since November 2017 for a further 9 months, up until March 2020. The extent of the cut remains the same, i.e. 1.2mbpd, essentially meaning a rollover of the status quo for the upcoming months. The news stopped short of invigorating the markets, in fact, crude prices slipped $2 per barrel day-on-day on Tuesday, on worries that demand might actually slow down to such an extent that it might render the OPEC+ supply cuts irrelevant. 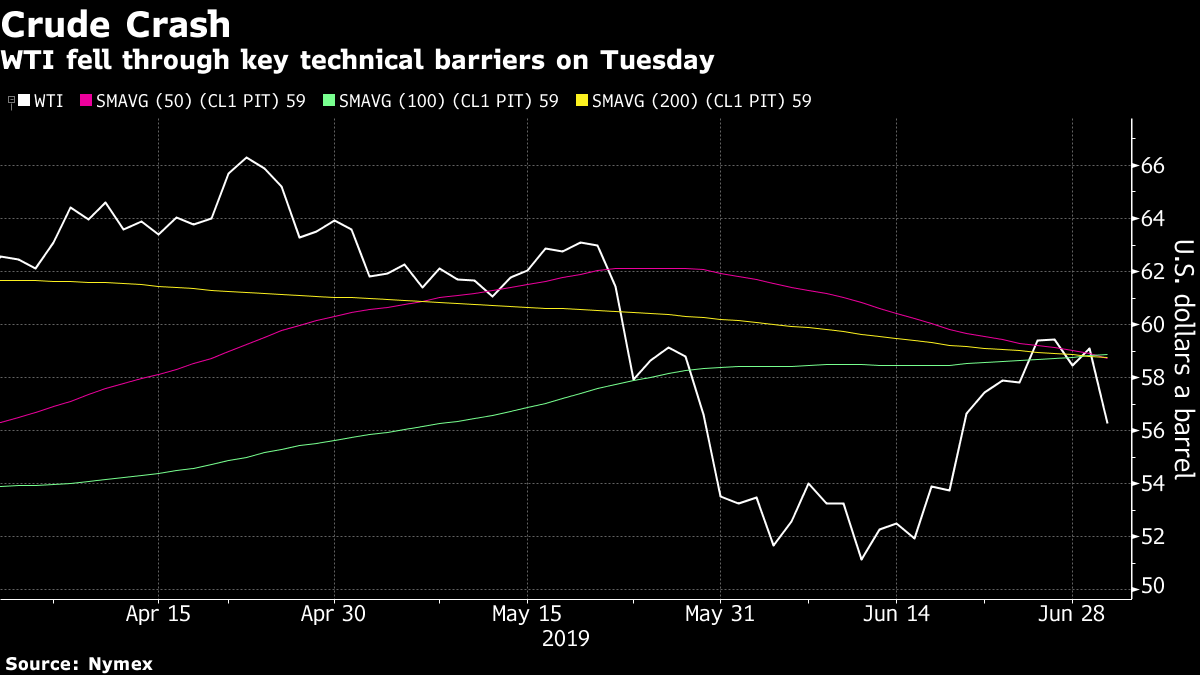 In addition, disagreements between Saudi Arabia and Russia on the fundamentals of the required global inventory levels have somewhat marred the long-term prospects of the OPEC+ charter. Wednesday saw an uptick in crude levels largely attributable to US crude inventories, yet it still remains to be seen whether the anticipated OPEC-induced price rebound will take place. As of Wednesday afternoon, global benchmark Brent traded at $63 per barrel, whilst WTI was assessed at $56.6-56.8 per barrel.

1. Venezuelan Blending Rising From the Dead

– With the US market blocked for synthetic crude previously produced at PetroPiar, PDVSA is now seeking to configurate the blending to receive 16° API Merey as the end result.

– Merey has become the key crude export stream for Venezuela, with regular exports to Jamnagar in India, Shuidong, Zhanjiang and Ningbo in China and Singapore.

– For that end, PDVSA will blend 8-10° API Orinoco heavy bitumenous crude with the light Santa Barbara (39-40° API, 1 percent Sulphur), resulting in some 170kbpd of Merey to be exported.

– This puts Chevron in a difficult position as it has to withdraw from Venezuela by July 27, 2019 if it wishes to comply with US sanctions, unless it manages to obtain a waivers.

READ ALSO  U.S. Oil Production Is On The Rise Again 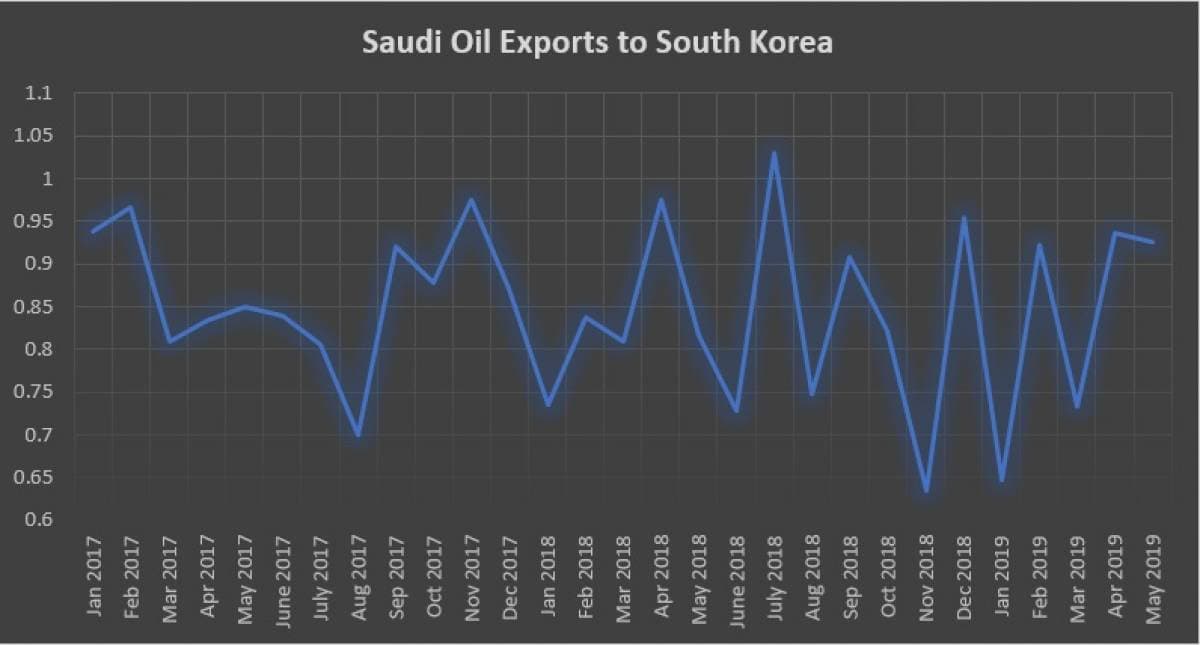 – Under the contract Aramco would supply 150kbpd of Saudi crude and 100kbpd of non-Saudi crude on a monthly basis via its trading arm, Saudi Aramco Trading.

– This marks a qualitative shift in Aramco’s ties to the Korean refiner following the Saudi’s recent acquisition of a 17 percent stake in Oilbank, estimated at $1.2-1.3 billion. 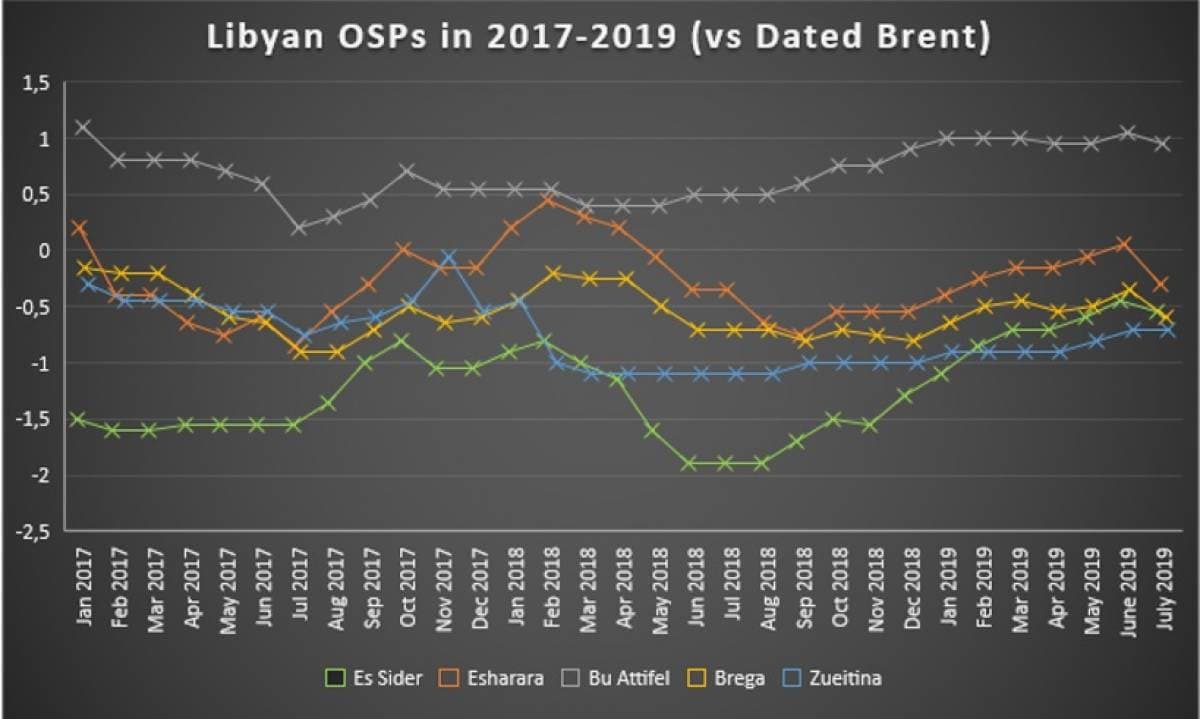 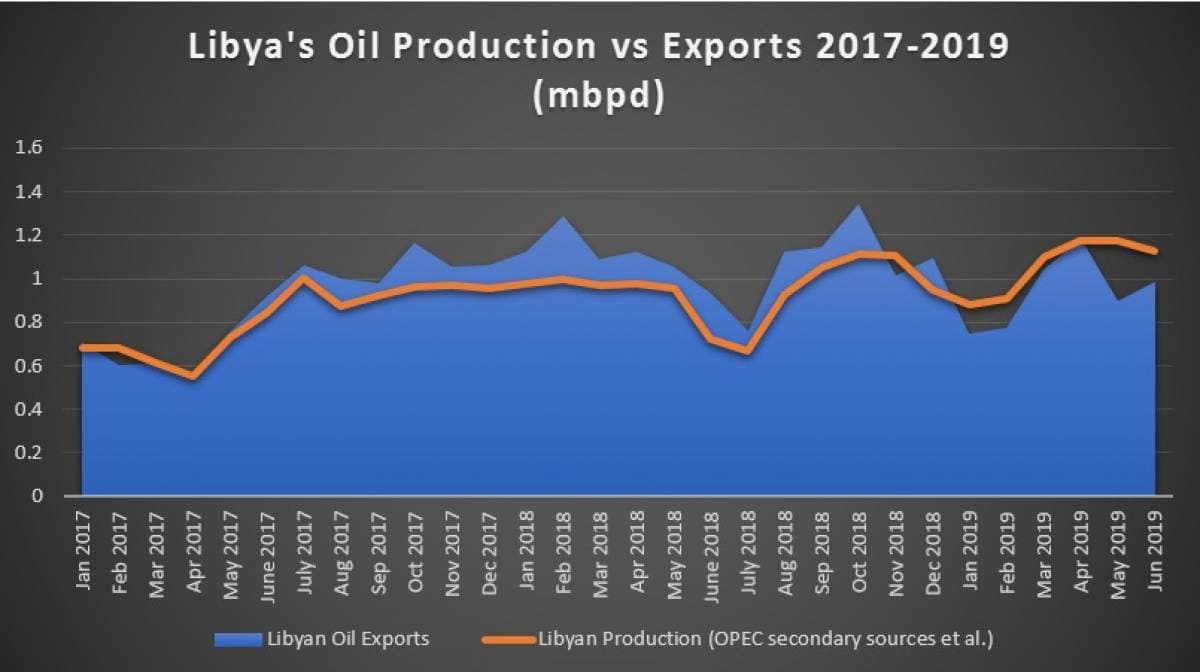 – Libya’s largest exports stream Es Sider was cut 10 cents per barrel month-on-month to a -$0.55 discount to Dated, whilst the second-largest Esharara was dropped 35 cents m-o-m (to a -$0.3 discount).

– Libya’s only sour crudes, Al Jurf and Bouri, webre kept unchanged from June as their pricing basis is Urals Med, making them much more receptive to overall trends in the Mediterranean.

– An LNA spokesman declared that Turkish assets in and around Libya, including oil tankers (one such, the Emek S, is nearing Brega), are „legitimate targets”. 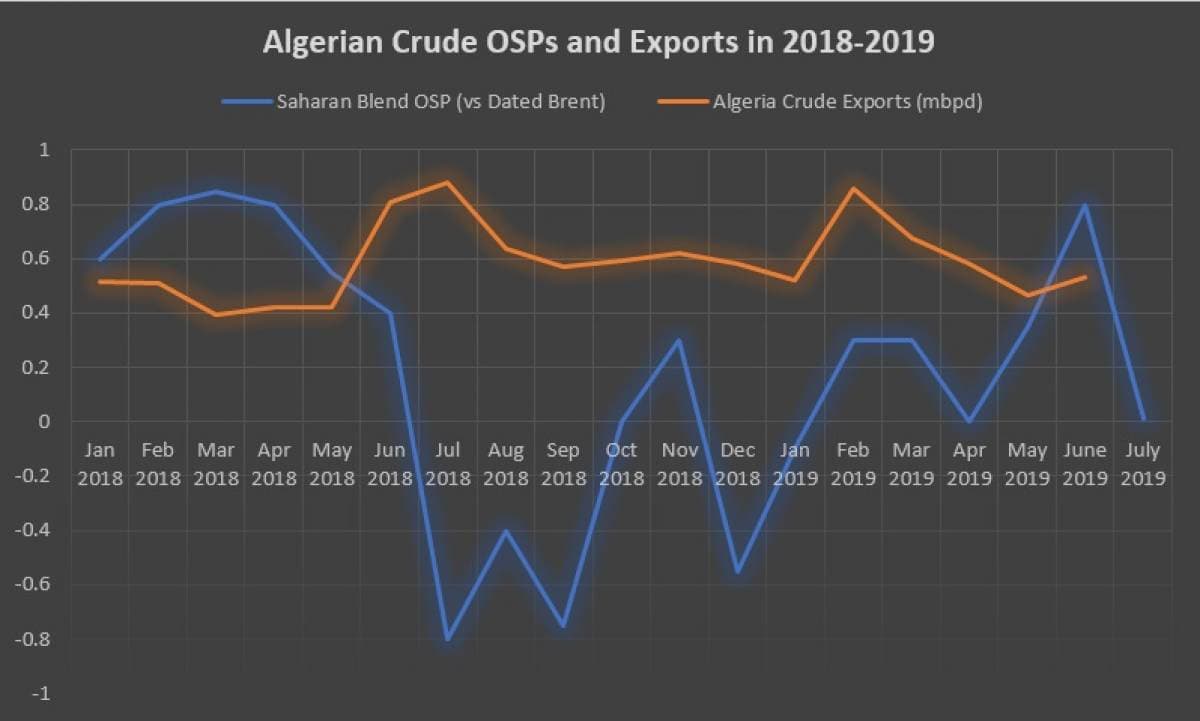 – The Algerian national oil company Sonatrach has cut its official selling price for July-loading Saharan Blend cargoes to an unorthodox $0.01 per barrel premium to Dated Brent, down 79 cents month-on-month.

– The July Saharan Blend prices are retroactive as all the cargoes have been already sold, interestingly however spot prices of the Algerian flagship grade have been assessed at a $0.75-0.80 per barrel discount to Brent.

– With Urals prices plummeting this June to a $2 per barrel discount to Dated, Mediterranean-traded light sweet cargoes, Saharan Blend and its closest competitor CPC have gone the same way downward.

– The burned-down 335kbpd Pennsylvania Refinery was a regular buyer of Saharan Blend (18 vessels in 2018, a mere 3 in 2019 though), trader ENI will have to find a new market outlet for those volumes.

– France remains the largest market for Algerian crude 2019 YTD with 108kbpd, followed by the United States (99kbpd) and the United Kingdom (85kbpd).

5. Tengiz Swept Away by Angry Riots 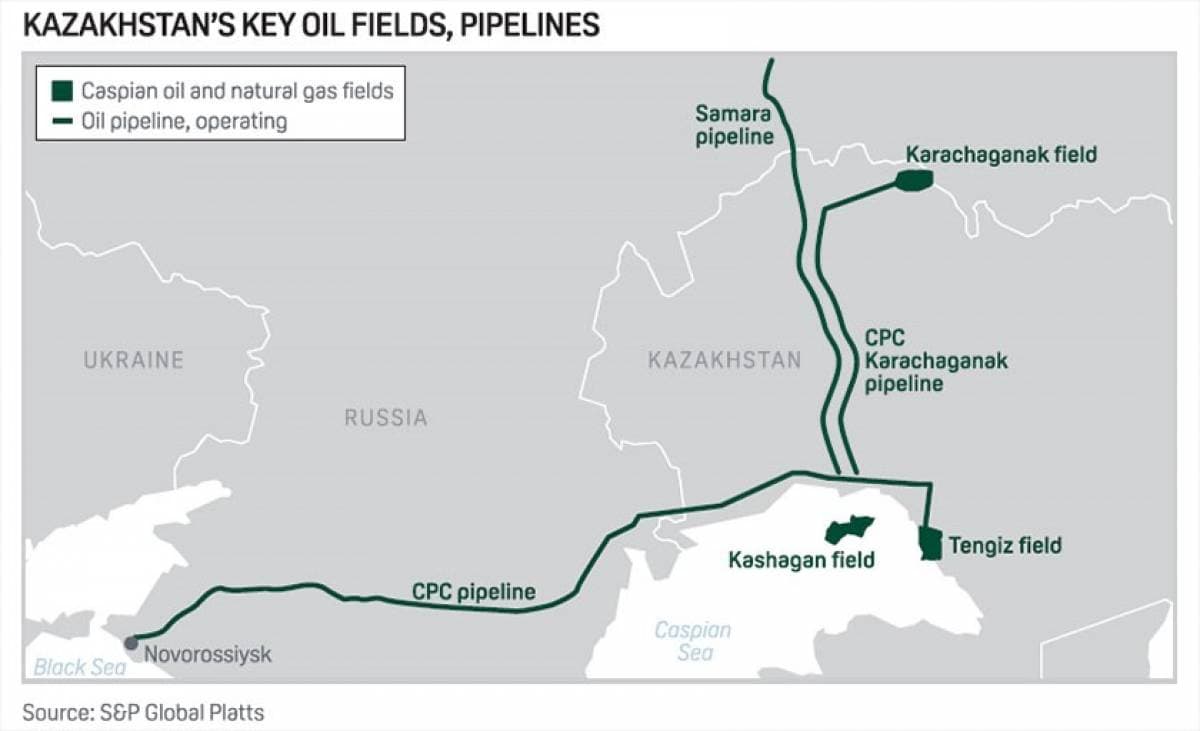 – Kazakhstan’s largest producing oil field was shook by a sudden outburst of clashes between domestic Kazakh workers and foreign subcontractors, apparently provoked by the culturally insensitive treatment of a local lady by a male worker from Libya.

– The Chevron-led Tengiz Future Growth expansion project became the scene of mass-scale beatings, leaving behind more than 40 people injured, with all Jordanian and Lebanese nationals evacuated from the site.

– One of the main thrusts of the Tengiz riots were demands for fairer treatment of domestic workers, easing of excessively strict work rules and amelioration of working conditions.

– All work on the Future Growth project was halted, however exports of CPC (of which Tengiz is the major part) were heretofore undisturbed.

– Tengiz produced 0.63mbpd in 2018 (28.6 million tons) – its output should increase to 0.9mbpd once the Future Growth expansion project is commissioned. 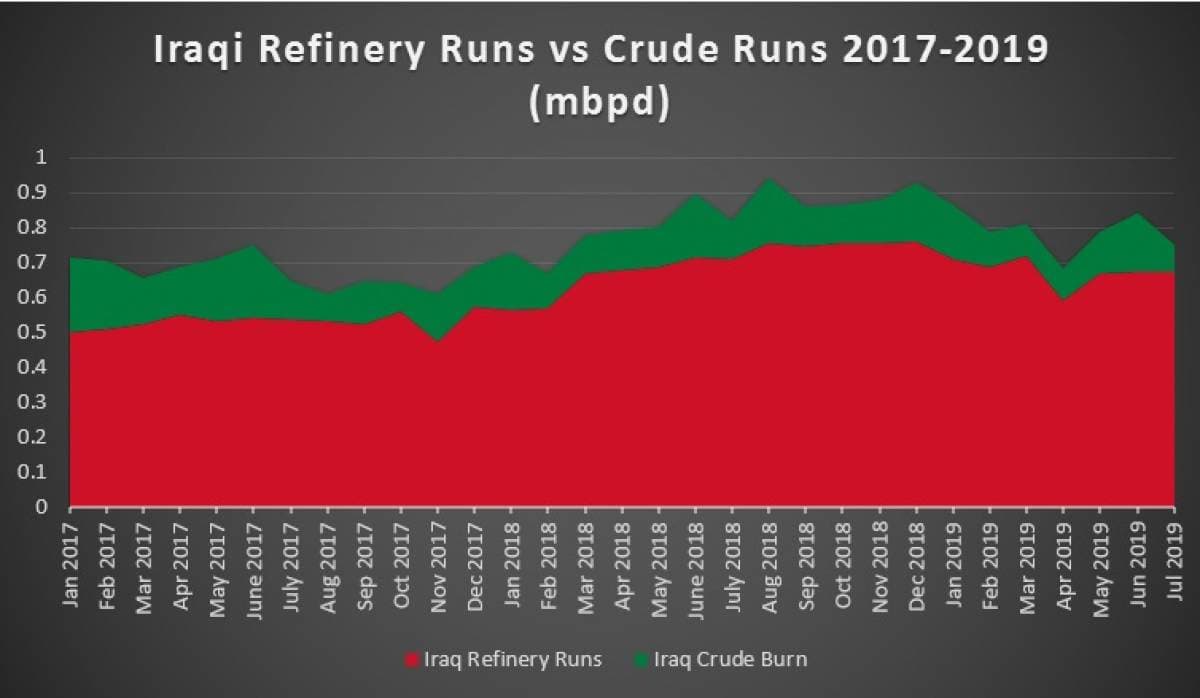 – Angolan national oil company Sonangol has set its sights on building a refining complex in Mosul, located in Iraq’s troublesome North next to the Kurdish border.

– In response to the Iraqi Oil Ministry’s tender to build a refinery in the Gyarah region of Mosul, Sonangol is proposing a 100-150kbpd capacity.

– Sonangol is operating the 30kbpd Qayara oil field that was taken over by Islamic State militants in 2014, axing the Angolan major’s plans to reach 120kbpd peak production by end 2010s.

– The Qayara crude is extremely heavy by Iraqi standards, within the 15-18 API degree range, necessitating a deep conversion technology for the site.

– The irony of the situation is that Angola’s (relatively unsophisticated) refineries will be built/modernized not by Sonangol but by the Italian ENI and the Hong Kong-based United Shine consortium.

7. Equinor Takes Over Wisting from OMV

– The oil major Equinor clinched a deal with the Austrian OMV over the development of the Wisting field, one of the northernmost and most challenging fields of the Arctic.

– Equinor would take over the development of 440 MMbbl Wisting until the field is brought onstream, then handing it back over to OMV.

– Wisting presents a multitude of challenges – it is more than 300km from the continent in icy waters with little to none sunshine throughout the year.

– The field’s geological structure is demanding, too, as the shallowness of the reservoir (crust a mere 250m below seabed) and low pressure levels makes it susceptible for crude leaking to the seabed.

– With much of Norway’s political elite now making a stand against drilling in the Arctic, buttressed by the somewhat botched history of Goliat, OMV delegated the politically difficult part to its Norwegian partner.

– On the other hand, Wisting’s reserves might be even larger than initially thought – following up on previous successful appraisal drills, OMV has spudded the Iris well (to the south of Wisting) in June 2019 which might put the total reserves above 0.5 Bbbl.

Previous PostPaul Joseph Watson: UK: Afghan Migrant Asked People if They Were English Before Attacking Them With a 10-inch KnifeNext PostDow, S&P 500, Nasdaq hit new records ahead of July 4th