The world’s largest sportswear maker by revenue said digital sales nearly doubled in the three months to the end of August, reflecting increases in online shopping during the pandemic — suggesting online shopping habits were becoming ingrained even as “virtually all” of its retail stores reopened from lockdown closures.

The results far exceeded Wall Street expectations, as polled by S&P Capital IQ, and Nike shares rose more than 13 per cent in after-hours trading on Tuesday to $132, a record.

Nike has worked to transform itself from primarily a wholesaler to a direct seller over the past few years, eschewing some bricks-and-mortar retail partners and investing in its own stores, its website and apps.

Still, Nike executives said there was room for improvement, particularly in its home market.

“The North America retail market is the most fragmented and least far along of where it needs to get to, of the major markets in the world,” John Donahoe, chief executive, said on Tuesday on a call with analysts.

While other regions, especially China, report a higher proportion of digital sales, US consumers have not yet moved fully online, he said.

“What’s happening in the [North American] retail market in the next four to five years, we’re going to try to drive it for our business in the next one to two years.”

Overall, Nike reported revenues of $10.6bn for the quarter just ended, down just 1 per cent from the same period a year ago, driven by a 82 per cent growth in digital sales. Net income for the period rose 11 per cent to $1.5bn.

Since the onset of the pandemic, sales are growing again in big markets including China, Japan, South Korea, the UK and Germany, executives said. Sales in Nike’s North American market, its largest by revenues, fell 2 per cent in the quarter to $4.2bn. 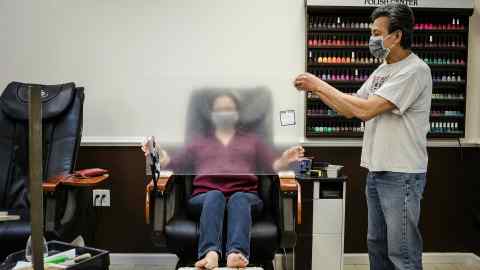 The company said some of its best-selling products included its Air Max 90 shoe, and a newly launched line of yoga apparel.

In June, Nike began restructuring its operations, streamlining its product categories and announcing lay-offs for hundreds of employees, including at least 500 at its headquarters in Oregon in the coming months.

Matthew Friend, Nike’s chief financial officer, said the restructuring would result in a one-time charge of between $200m and $250m, and would accelerate growth in its digital business.

He also forecasted revenue growth in the high single-digits to low double-digits over the remainder of the company’s fiscal year, which began June 1.