On Democratic Socialism, Socialism and Capitalism 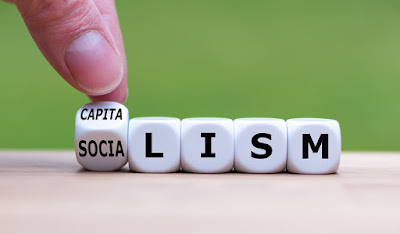 I read EconomicPolicy Journal on a daily basis. I have never much had the desire to write to you mainly because the probability of you reading my correspondence is low. But here it goes.

From my perspective the biggest danger of our times is the basic misunderstanding of the meaning capitalism and socialism. In the classic sense it is very easy as Capitalism is the ownership of the means of production by the private individual and socialism is the ownership of the means of production by the collective (aka the government). But capitalism and socialism do not mean this anymore. Just ask any one of the talking heads on Bloomberg or CNBC or just the regular person on the street, the answer will be that we either live in a capitalistic system or once in a while they will say a mixed economy. If you asked these same people to define socialism and the answers are all over the place. I would also add if you asked people if capitalism equates to free market system the answers will also be very vague. In addition, I am not sure the general public at large realizes that the United States does not operate in a capitalistic system. If you asked me what kind of a system we live in I would say it is the economic system of Fascism. My argument has been that although Moussilni lost the physical war, he won the ideological war of economic systems.

Why do I then say that the greatest danger to our lifetime is the misunderstanding of the meaning of Capitalism and Socialism? It is because the public at large thinks we are operating in a free market capitalism and all the ills of the world are because of this system. Once you have identified this, the next thing would be to change the system to some kind of a socialist system (whatever that means now). The danger comes in that as we move the spectrum more and more towards socialism the outcome at the least will be to lower the standard of living of the population. This becomes a vicious circle because the answer will always be to have more socialism until at some point in time the economic system becomes very close to socialism (I say very close because I think full socialism is unattainable). As a person that was born in the Soviet Union and migrated to the United States, I hope my time on earth has come to an end from old age before this transition occurs.

I would love for you maybe to expand on this and maybe to a podcast on the topic. As for me? I am very pessimistic about the direction that we are headed as a society.

Thank you, Mr. Bun, for your thoughtful words.

First, I do read all the emails that come to me. That said, it would be impossible to reply to all of them at length though.

As for the body of your comment, you do make a number of important points.

I would add though that it is not important for the masses to get into the intricacies of the difference between, say, socialism and fascism. That is why I tend to frame the problem in terms of freedom versus central planning. This is a very easy concept to understand and makes it easy for individuals to understand what fits in the central planning category and what fits in the freedom category.

As for the term capitalism, I will use it occasionally but I will differentiate it from crony capitalism. I prefer using the term free-market economy or when discussing things in a broader context the Private Property Society.

The goal is not to turn the masses into scholars on the nuances between, for example, Fascism and the Soviet communist state but rather to get the simple concept across that every economic and societal structure boils down to either individual freedom or central planning within the context of private property or government-controlled property.