The word “turbulent” only begins to describe this year’s price action in iPath S&P GSCI Crude Oil Total Return Index ETN (OIL). With prices witnessing over 50% declines on a year-to-date basis as well as last week seeing a rally of over 30%, trades in OIL have been in for quite a ride. While these markets have been incredibly volatile, I believe that traders should take an impartial look at the underlying fundamentals to best assess where crude is headed. I believe that it is not quite time to buy crude oil, but within the next few weeks, a strong buy signal may result from the currently-evolving fundamentals.

Let’s start this piece with a deep dive into the history of 2020. While we are only in the fourth month of the year, we have seen quite a bit of historic action already which has made this year one for the history books.

Starting the year off, the markets were actually fundamentally becoming quite bullish. The key driver of the bullishness in the earlier part of this year was the fact that we saw supply growth contracting while demand was generally unchanged. This fundamental mix led to a generally bullish environment with inventories under the 5-year average for the first part of this year. 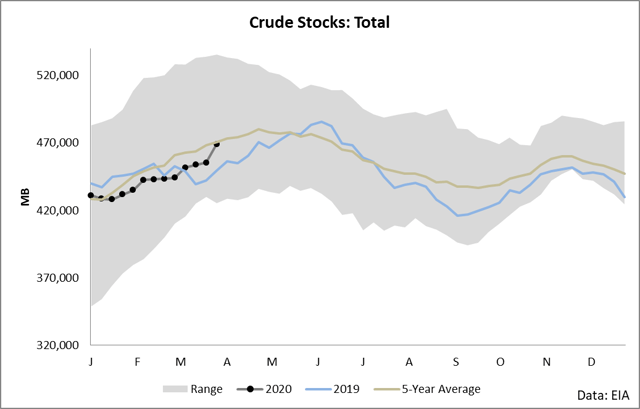 However, things changed in the late January timeframe when it became increasingly obvious that the world was poised for a global pandemic as the coronavirus started its spread from mainland China. For energy markets, this story became progressively more bearish as crude oil slid in the face of a decline in demand. When it comes to understanding crude oil, it is important to remember that it is essentially just a transportation fuel – when economies are shut down, fewer people are driving or flying and therefore crude oil will generally decline in value.

In the midst of the coronavirus outbreak, OPEC+ did the unimaginable: it broke up. The backstory here is that for the past 4 years or so, OPEC and Russia have been coordinating their actions to help balance the market in the face of growing shale output from the United States.

This relationship has been fairly effective at managing prices in that over the past few quarters, OPEC (really mainly just Saudi Arabia) and Russia have been able to generally reach agreement in each meeting. During the meeting in early March, OPEC and Russia walked away without an agreement in place and over the weekend after the meeting, a price war ensued.

This price war has been the defining tone of oil markets for the past few weeks. The reason why this price war is so painfully felt at this time is because of the collapsing refining demand. In other words, in normal times, this price war would be bearish – but given that we’re in an environment in which demand is already historically weak, the price war becomes unprecedented.

This is the key thing to keep in mind as OPEC and Russia come back to the table later this week. We are currently sitting on a precipice. If OPEC+ is able to reach a historic agreement of very large cuts, then the crude fundamentals will be neutral to slightly bullish in the short term – bullishness which will expand as we recover from the virus. In other words, as crude demand slowly recovers from the virus, we will see a general increase in the price of crude due to constrained supplies from the output cuts. However, if OPEC+ is unable to reach an agreement, we truly could see prices collapse once again. This said, much of the short-term focus for crude oil will be highly dependent on what Saudi Arabia and Russia agree to in this key meeting.

However, even with an agreement in place, the short-term fundamentals are accelerating into the bearish territory. For example, here’s a shot of refining demand in the United States with data through Friday. 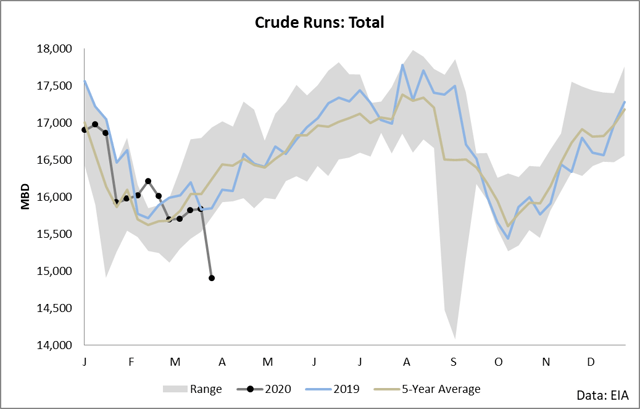 As you can see, this is a very large weekly drop in overall crude runs. This type of drop is typically only seen when we have a hurricane or a natural disaster hit a specific region of the country. And the problem here is that given that the president has asked for general quarantine precautions to be exercised through at least April 30th, this trend is likely to continue to accelerate for the next few weeks.

READ ALSO  Netflix and these other stocks will rally further, Oppenheimer says

As you can see from the year-to-date build perspective, this has just kicked off a trend which will likely carry us to one of the largest builds seen in many years before it turns back over and demand recovers. 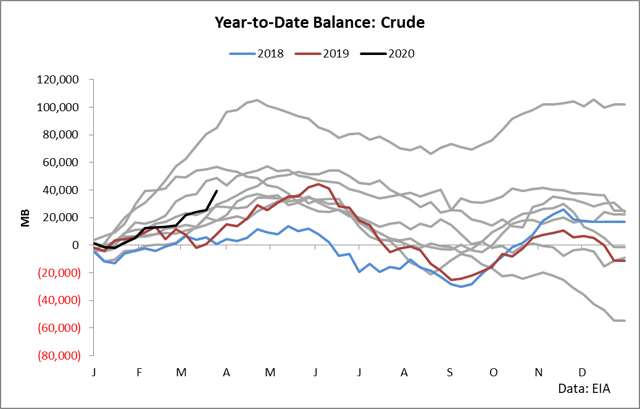 Ultimately, these two conflicting variables are why I currently have a neutral bias on crude oil. On the bullish side, we have OPEC+ potentially reaching an agreement as well as the fact that these lower prices were already hampering production growth in the United States. 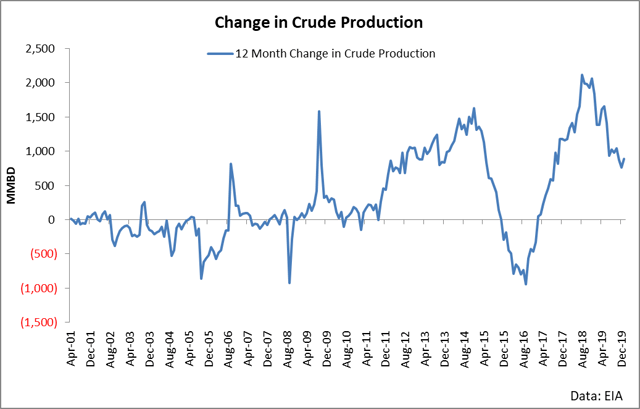 But on the bearish side, we have demand destruction in the form of less driving which is resulting in fewer barrels needing to be processed to satisfy the market. This is leading to a boom in gasoline stocks which will further hamper crude refining demand due to weaker gasoline cracks. 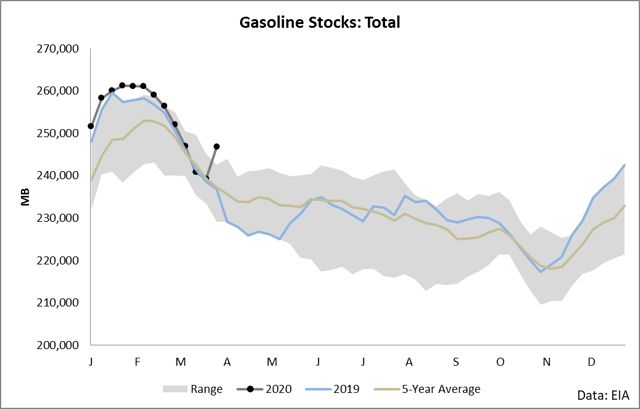 With crude oil caught between these twin variables, I am currently neutral oil. However, if OPEC+ reaches a historic agreement this week, my bias will likely shift to be strongly bullish due to the fact that when demand recovers, supply will be substantially weakened which will lead to higher prices.

As I mentioned in my last article on OIL, there are important variables to consider before trading this ETN. The basic concept to keep in mind is roll yield.

Roll yield is what you get when you hold exposure on a futures curve and futures prices converge towards spot. At present, Brent and WTI are both in strong contango, which means that later months are priced higher than the front-month contracts.

The problem here is that since OIL is holding long exposure and rolling this long exposure into the later month contracts, its exposure is shifted to higher prices. This transaction in and of itself doesn’t lose money, but the problem arises when these futures prices converge towards the spot price by declining in relation to it.

What this ultimately means for shareholders is that at present, OIL is suffering from negative roll yield since the futures it tracks are being rolled in a contango market. This tangibly means that in an environment in which crude oil goes nowhere, you would see losses in OIL since the futures contracts held will generally be declining in value towards the spot price in a typical cycle.

This is another reason to stand aside in OIL until the fundamental fog clears. At present, the cost of rolling is fairly high (strongest level of contango in several years) which means that losses from roll yield will be material. Things are moving very fast these days, but at present, the level of contango is around 10% in the front months, which means that losses from roll yield are somewhere between 0% and 10% in a typical month at this point. The underlying futures are free-trading and volatile, so it’s impossible to give a more precise number, but in general, roll yield is taking a strong toll on shares of OIL which is a strong reason to wait for clarity from OPEC+ before acting.

OIL has taken a strong hit this year as demand destruction has been met with a price war between Saudi Arabia and Russia. OPEC+ meets later this week to determine what it will do in terms of a production cut, and OIL traders should avoid a position before this point. Roll yield is currently taking a hefty toll out of traders in OIL with the current monthly contango clocking in at around 10% in futures markets.