The heightened tension in the Middle East and security risks in the key waterways around the Arabian Peninsula have prompted the world’s most influential marine insurers’ organizations to expand their high-risk areas in and around the Persian Gulf—a region which now represents the highest risk to oil tanker traffic in nearly a decade and a half.

The higher perceived risks for oil shipping around many of the world’s most important chokepoints could lead to higher insurance costs for the dozens of millions of barrels of oil per day that pass through the key oil shipping lanes in the region, and could sift through in higher crude oil prices, industry executives tell The Wall Street Journal.

Following last week’s incidents near the United Arab Emirates (UAE) and a drone attack on a key onshore oil pipeline in Saudi Arabia, the Joint War Committee of Lloyd’s Market Association—which includes underwriting representatives from both the Lloyd’s and the International Underwriting Association (IUA) of London—raised the security-risk status of several areas in the Persian Gulf and surrounding waterways. The committee added Oman, the UAE, the Persian Gulf and adjacent waters including the Gulf of Oman west of Longitude 58°E, to its so-called Listed Areas—areas of perceived enhanced risk.

Last week Saudi Arabia said that two of its oil tankers were attacked by saboteurs near the UAE, while the UAE said that a total four vessels were attacked off its coast at the port of Fujairah, which is the world’s second-largest bunkering port, according to the EIA.

“The enmity between Iran and Saudi Arabia continues to create tensions as the Saudis believe Iran is trying to control strategic waterways. The recent tightening of Iranian sanctions by the US administration will raise tension in Iran and cause difficulties for Asian buyers,” Lloyd’s Market Association’s Joint War Committee said upon announcing its expanded list of higher-risk areas in the Middle East.

“Very little information is to hand about the explosions at Fujairah anchorage on 12th May and the circumstances and methods employed remain unclear. There is no doubt that considerable damage was done and there will be significant claims,” the committee added.

This expanded list of “areas of perceived enhanced risk” is the highest security risk in the region since the Iraq war in 2005, according to Bloomberg.

“That does not automatically mean that every ship will be charged an additional premium — that is a decision for the individual underwriter having assessed the specifics of the voyage in negotiation with the broker,” Neil Roberts, Head of Marine Underwriting at Lloyd’s Market Association, told the Financial Times. Related: War With Iran Could Send Oil To $250

The Strait of Hormuz is the world’s most important chokepoint, which Iran has repeatedly threatened to close if it’s denied exporting its oil. 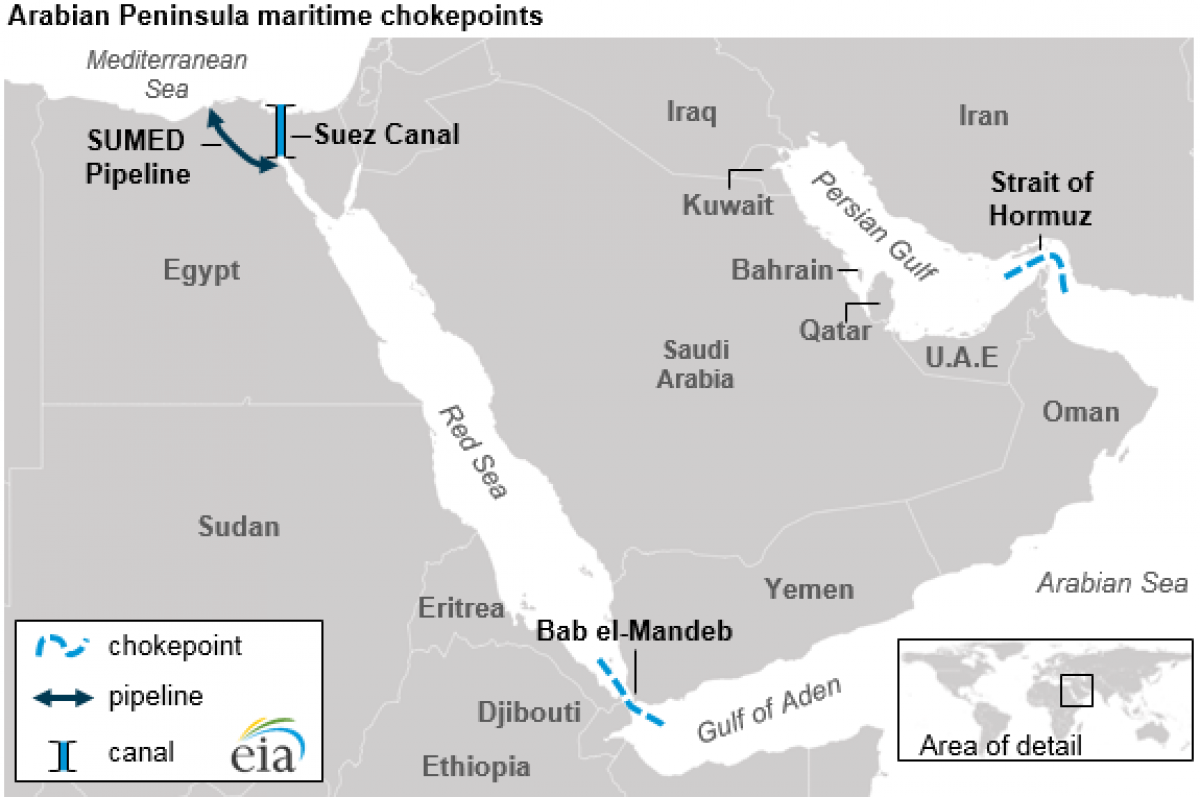 Apart from the Strait of Hormuz, there are two other chokepoints around the Arabian Peninsula— the Suez Canal and SUMED Pipeline in Egypt, and the Bab el-Mandeb Strait offshore Yemen.

Although the Lloyd’s Market Association “areas of perceived enhanced risk” is a non-binding assessment of shipping security risks, insurers generally follow ‘heightened risk’ status by the London marine insurers. If the marine insurance industry starts considering the area as being at higher risk, the cost of insuring oil tankers passing through the chokepoints around the Arabian Peninsula could rise.

By Tsvetana Paraskova for Oilprice.com