Oil was flat at the start of trading on Tuesday, still caught between U.S.-Iran tensions on the one hand, and the downside risk of the U.S.-China trade war. 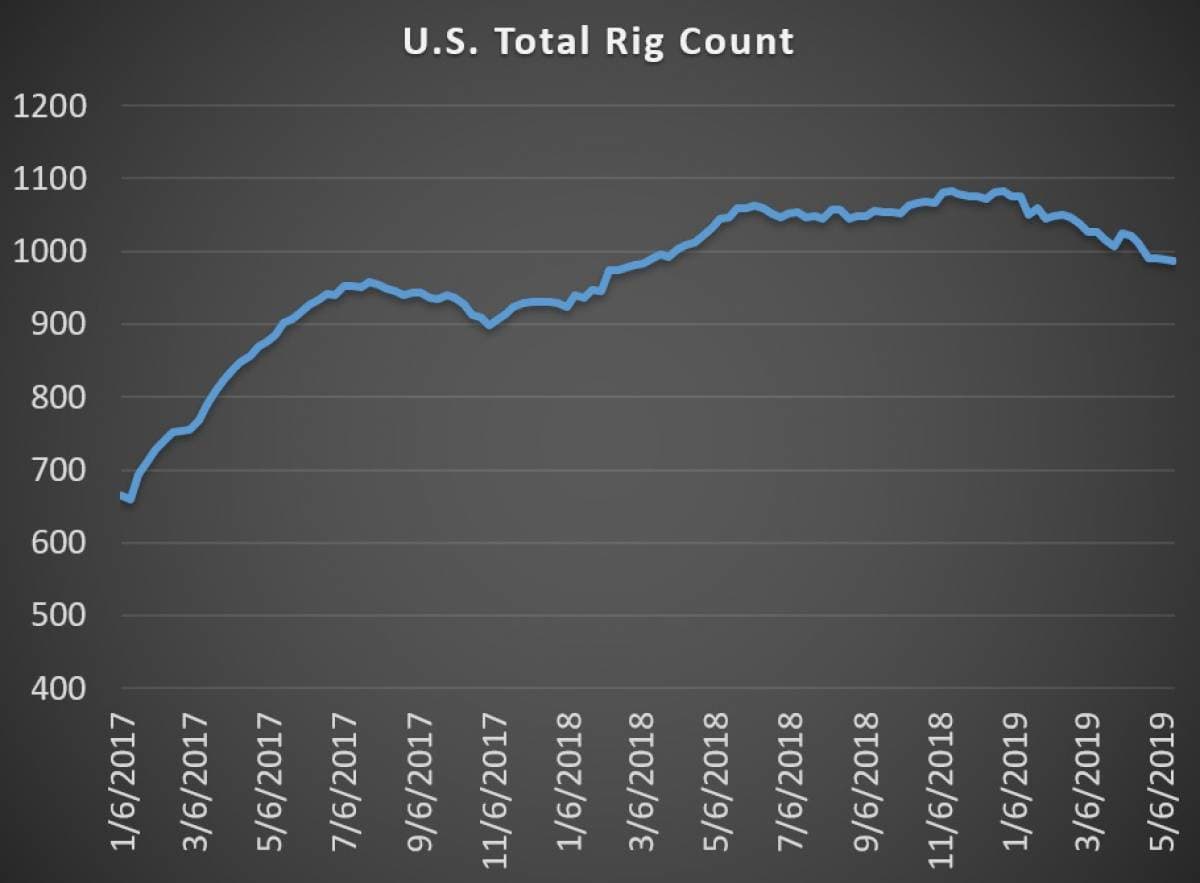 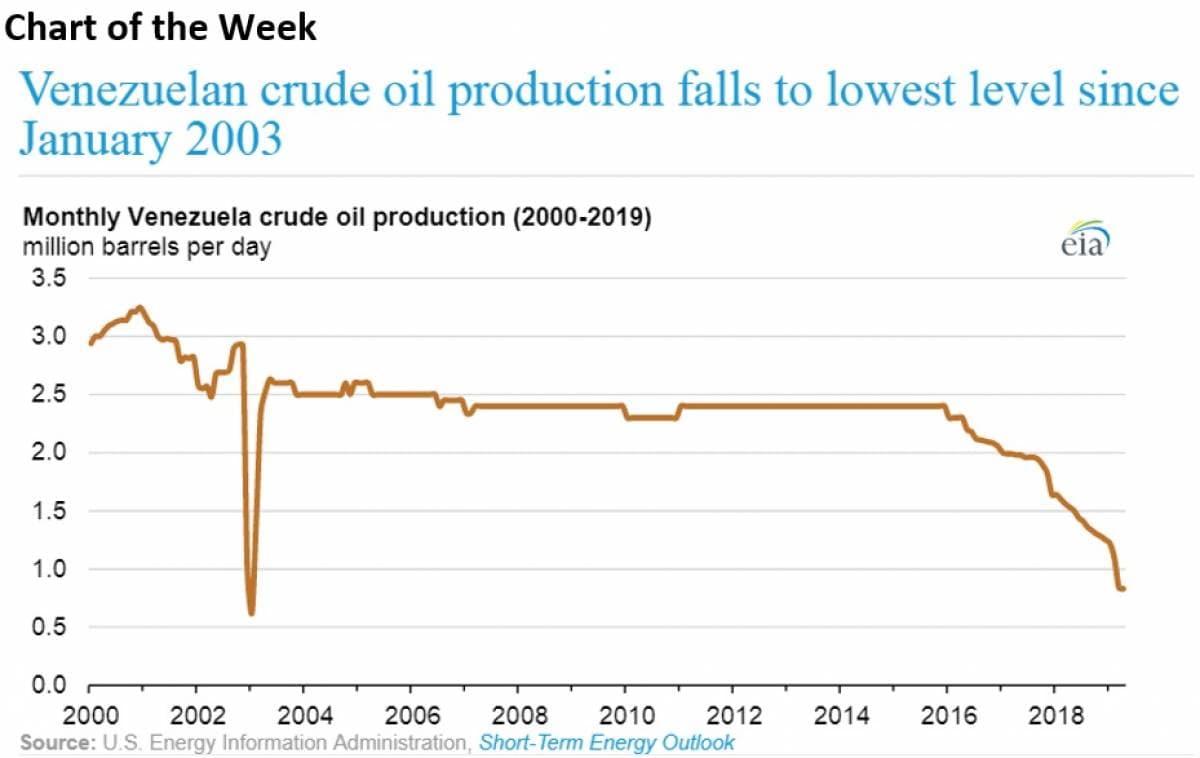 – Outside of a 2003 strike by PDVSA workers, which saw production plunge, Venezuela’s oil output is at its lowest point in decades.

– BP (NYSE: BP) and Royal Dutch Shell (NYSE: RDS.A) will donate $1 million each to a Republican-backed plan to tax carbon emissions at a rate of $40/ton of CO2, with revenues sent to taxpayers as a “dividend.” The proposal would also gut environmental regulations.

– Natural gas prices rose to five-week highs after a dip in production and rising temperatures, which should lead to higher demand.

– Total (NYSE: TOT) and Eni (NYSE: E) have stopped payments to Russian oil companies who sold them contaminated crude. The European firms said that they would only resume payment when a compensate deal can be reached.

OPEC+ considers production increase. OPEC+ reportedly discussed two options for increasing production in the second half of the year. According to Reuters, the group weighed a plan that would end over-compliance with the cuts, which could add 0.8 mb/d of supply back onto the market. Or, the group could agree to trim the cuts from 1.2 to 0.9 mb/d. However, the group will wait until the June meeting in Vienna to make a decision, and many members are inclined to extend the cuts.

READ ALSO  Blain: "What Will Be The Effect Of The $1.9 Gazillion Biden Spend-A-Thon On Inflation"

Trump says China trade deal can’t be “50-50.” President Trump said that any trade deal with China must skew in favor of the U.S. because of past trade actions by China. The message seems to lower odds of a breakthrough in the weeks ahead. Meanwhile, the Trump administration lifted steel tariffs on Mexico and Canada.

Related: War With Iran Could Send Oil To $250

Financial stress in shale sector. Bankruptcies in the U.S. energy sector are “trailing only those in the discretionary consumer goods sector,” Bloomberg News reported. Oilfield services giant Weatherford International PLC, recently delisted from the New York Stock Exchange, may need to file for Chapter 11 bankruptcy. The company lost $2.8 billion last year. Other signs of stress are emerging in the shale patch with Halcon Resources (NYSE: HK) also a financial wreck. The SEC is investigating Alta Mesa (NASDAQ: AMR) for potential fraud in financial reporting. “A lot of people see the $60 or $70 and assume everything is great,” said Spencer Cutter, an analyst at Bloomberg Intelligence. “I think 2019 is going to be a bigger year for bankruptcies than 2018.”

U.S. shale on track for 16 percent growth. U.S. shale operators are on course to boost production by 16 percent this year, according to Rystad Energy. That could put output up 1.1 to 1.2 mb/d by the end of the year. “Despite temporary challenges faced in the beginning of the year, E&P companies are set to deliver on their original production and capital targets, with some being well positioned to perform above initial expectations. US shale players can still be expected to deliver around 16% oil growth in 2019,” Veronika Akulinitseva, senior analyst at Rystad Energy. “Several operators have in fact raised their production guidance for the remainder of the year.”

IMO rules could send Brent to $90. Forthcoming rules on sulfur fuels in the maritime sector could push Brent up to $90 per barrel, according to Bank of America Merrill Lynch. That forecast hinges on a resolution of the U.S.-China trade conflict and ongoing demand growth.

Texas advances bill to punish pipeline protestors. The Texas legislature is working on a bill that would impose stiff penalties on pipeline protestors. The legislation classifies pipelines as critical infrastructure, and trespassers could receive a third-degree felony and the prospect of 10 years in prison. The bill passed the Texas senate on Monday. Similar bills have cropped up in North and South Dakota, and have come in reaction to the Dakota Access protests from 2016. Related: The Single Most Bullish Indicator For Oil

BlackRock under pressure to stop funding fossil fuels. BlackRock, the world’s largest asset manager with over $6.5 trillion under management, is under pressure to cut ties with fossil fuels. BlackRock is among the top three shareholders in every oil major except for Total (NYSE: TOT), according to the Guardian. Major institutional investors are starting to press the company to reduce its funding of the oil and gas industry.

Chevron to offer EV charging stations. Chevron (NYSE: CVX) has begun offering some EV recharging ports at several of its gas stations in California. The infrastructure was installed by EVgo. The move is modest, but signals a shift in strategy from the oil majors. Earlier this year, Royal Dutch Shell (NYSE: RDS.A) purchased Greenlots, a U.S.-based EV recharging developer.

U.S. sanctions coming on Nord Stream 2. U.S. Secretary of Energy Rick Perry said that a sanctions bill on the Nord Stream 2 pipeline would come in the “not too distant future.” “The opposition to Nord Stream 2 is still very much alive and well in the United States,” Perry told a briefing on a visit to Kiev for the inauguration of President Volodymyr Zelenskiy. Separately, Gazprom said that delays in getting permits from Denmark could push off the in-service date of the project into 2020 from late 2019.

Nigerian pipeline shut after fire. Nigeria’s Trans Forcados pipeline remains shut down due to a fire even as Royal Dutch Shell (NYSE: RDS.A) has not declared force majeure on shipments. The pipeline has a capacity of 240,000 bpd.

Tesla in “Code Red Situation”. Tesla’s (NASDAQ: TSLA) stock has fallen more than 20 percent in the past month and one analyst said the company’s shares are in a “Code Red Situation.” The collapse comes after the company closed offerings of new stock and convertible bonds to bring in more liquidity. “With a code red situation at Tesla, Musk & Co. are expanding into insurance, robotaxis, and other sci-fi projects/endeavors when the company instead should be laser-focused on shoring up core demand for Model 3 and simplifying its business model and expense structure,” Wedbush analyst Dan Ives told Bloomberg.

Previous PostFængsel til digital sexkrænker #politidk …Next PostU.S. trade chief to talk with EU, Japan amid concerns over Chinese subsidies