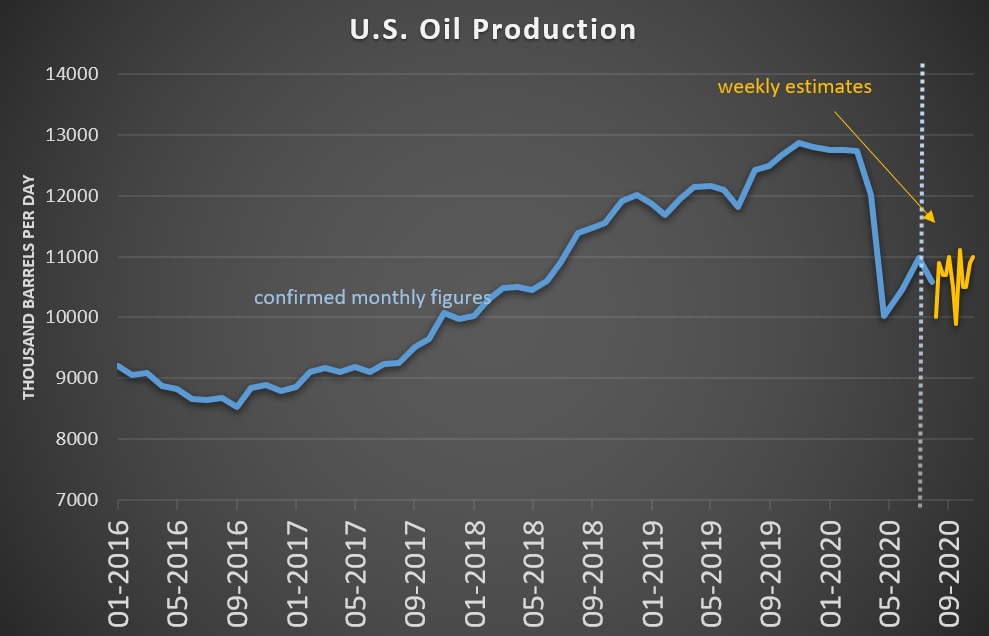 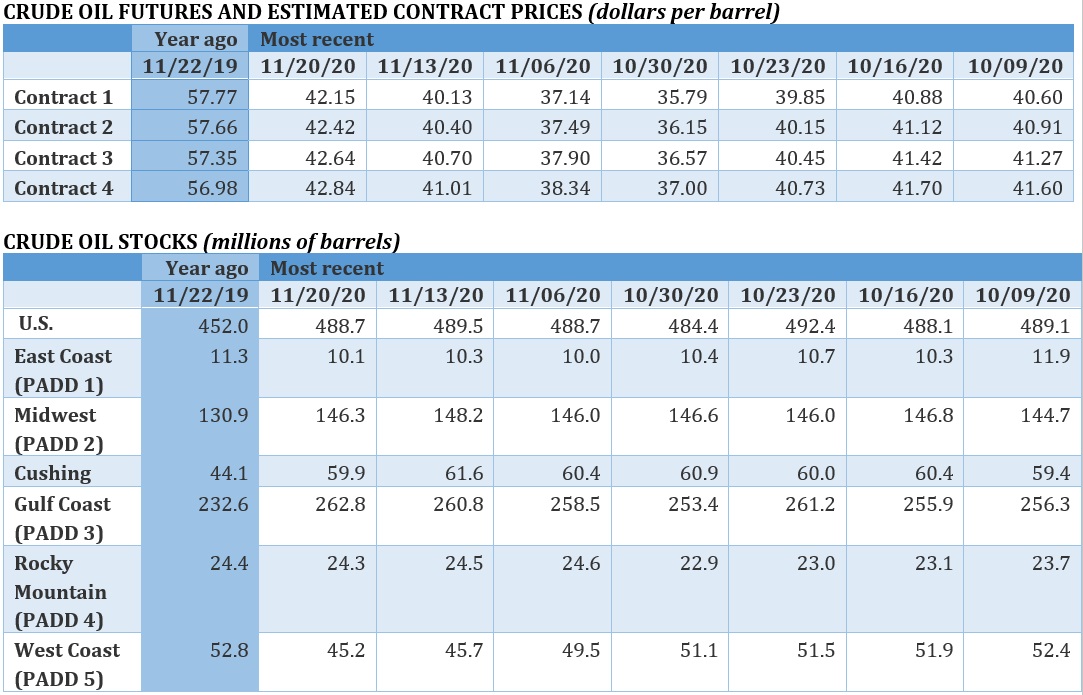 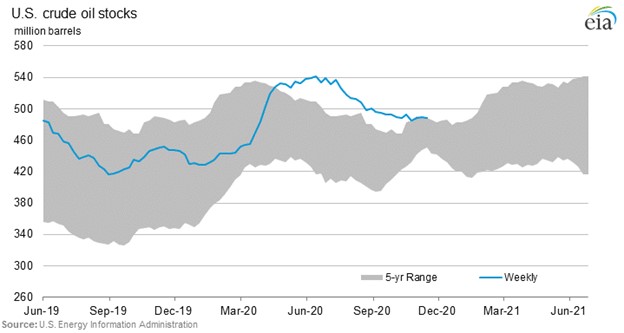 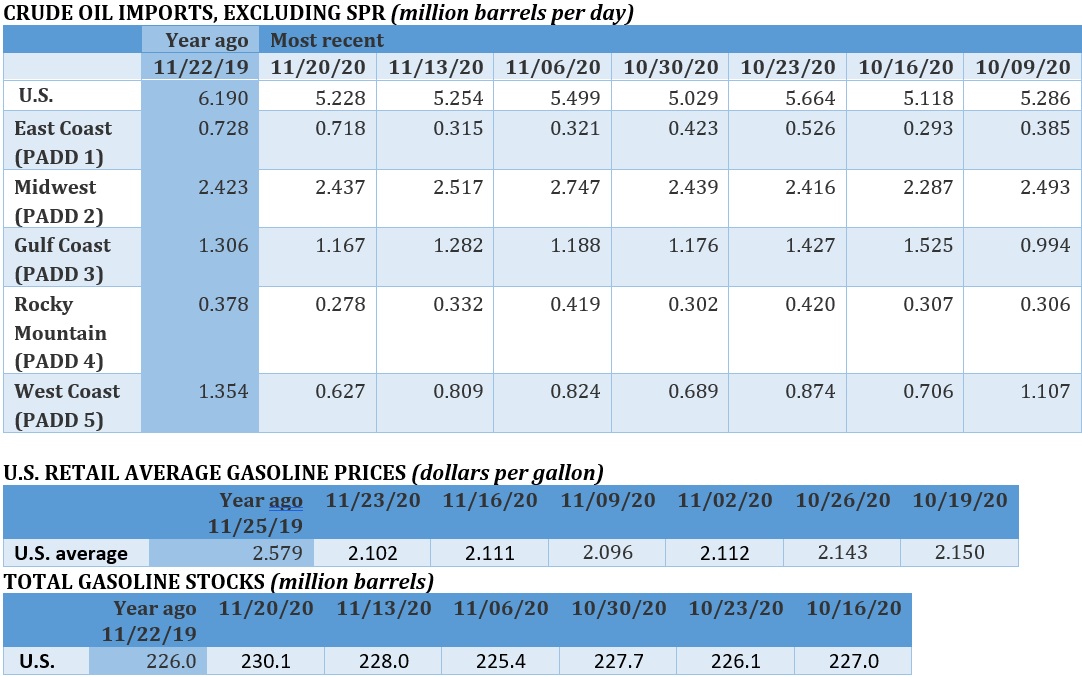 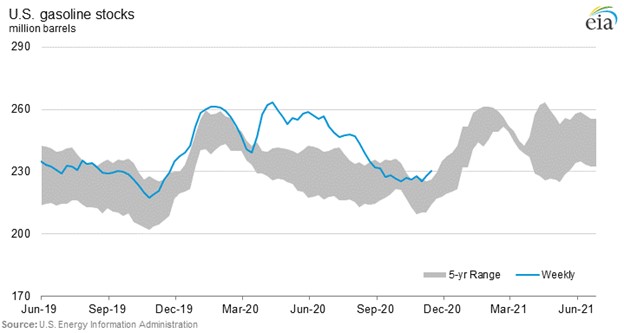 Oil prices have held on to recent gains despite Covid-19 headwinds. Investors are growing increasingly optimistic and looking beyond the immediate crisis. “It’s a total change of vibe,” Robert Yawger, director of the futures division at Mizuho Securities USA, told the WSJ. “Everything is much more positive now.”

OPEC+ leaning towards 3-month extension. OPEC+ is leaning towards a three-month extension, although not every member is on the same page. Oil prices are holding firm on expectations that the group avoids letting the production cuts ease as scheduled in January, and instead pushes that off until the end of the first quarter at least.

Meeting scheduled for Saturday. The leaders of the OPEC+ pact, Saudi Arabia and Russia, have requested an informal meeting of the Joint Ministerial Monitoring Committee (JMMC) to be held on Saturday, before the alliance’s formal meetings on November 30 and December 1 to decide whether to extend the current level of oil production cuts.

U.S. rig count jumps to highest since May. The U.S. total rig count jumped by 10 last week, rising to 320, the highest number since mid-May.

READ ALSO  The best of Google, now in new devices

WoodMac: Renewables cheaper than coal in Asia Pacific by 2030. A new Wood Mackenzie report finds that renewables will be 23% cheaper than coal on a levelized cost of electricity basis in the Asia Pacific within the decade. Currently, renewables on average are 16% more expensive in the region. “Our LCOE estimates for solar plus storage and wind plus storage projects show that they can start to compete with gas in 2026 and 2032, respectively,” WoodMac said.

BNEF: solar+batteries cheapest. BNEF’s assessment is more bullish on renewables than WoodMac. BNEF says that solar plus batteries is the cheapest form of electricity in all major economies except Japan. That includes India.

Libya output up to 1.25 mb/d and holding steady. Libya’s oil production is up to 1.25 mb/d, up from only 80,000 bpd in August. “As long as the cease-fire holds, and political progress continues to be made, Libyan production will likely remain on the market,” Mohammad Darwazah, an analyst at consultant Medley Global Advisors, told Bloomberg.

Exxon cuts long-term oil forecasts. ExxonMobil (NYSE: XOM) lowered its long-term oil price forecast, although the numbers have not been made public. The Wall Street Journal reports that Exxon’s Brent forecast for the next five years has been cut from $62 (a 2019 estimate) to between $50 and $55 per barrel. The major has had to take on debt to cover its dividend. The price forecast is also important because it could prompt a substantial asset writedown. Exxon has hinted that it may need to write down as much as $30 billion, but no announcements have been made yet.

Petrobras slashes spending. Brazil’s Petrobras (NYSE: PBR) cut its five-year spending plan by 27% from a year ago, lowering it to just $55 billion.

Venezuela resumes oil exports to China. Venezuela has resumed direct oil shipments to China, after going underground for more than a year due to U.S. sanctions.

Oil Pirates Are Dangerously Close To U.S. Waters. Piracy threats reached a peak in the Bay of Campeche earlier this year, forcing the U.S. State Department to issue an official piracy warning in April in the southern Gulf of Mexico. Despite this, there has been little media attention on the issue.

Musk hints at long-range models. Elon Musk suggested at a conference that Tesla (NASDAQ: TSLA) could build longer-range EVs for the European market. The idea would be to extend existing models for a range approaching 700 kilometers (435 miles), and in the longer-term have models approaching 1,000 kilometers.

Equinor to invest $8 billion in offshore wind. Equinor (NYSE: EQNR) and UK utility SSE (OTCPK: SSEZY) announced a deal to invest $8 billion in the “largest-ever offshore wind project financing anywhere in the world.” The two-phase project will have a combined capacity of 2.4 GW, with a third phase in the works. When completed in 2026, it will supply the equivalent of 5% of the UK’s electricity needs.

European road fuel demand hit only 900,000 bpd. A Rystad analysis estimates that the hit to road fuel demand in Europe will be limited to just about 900,000 bpd, year-on-year, during this latest wave of Covid-19. Lower compliance with restrictions, narrower lockdown orders, and an aversion to public transit keeps demand aloft.

Exxon and Total in talks over Mozambique LNG. ExxonMobil (NYSE: XOM) and Total (NYSE: TOT) are in talks over their massive LNG projects in Mozambique, with both companies aiming to extract natural gas from a shared field. “They want to use the cheapest gas first – which is the straddling resources,” said one of the sources, according to Reuters.