Oil prices appear to be waiting for the presidential election before making any major moves, with prices falling due to rising Libyan oil production before climbing on positive news out of China 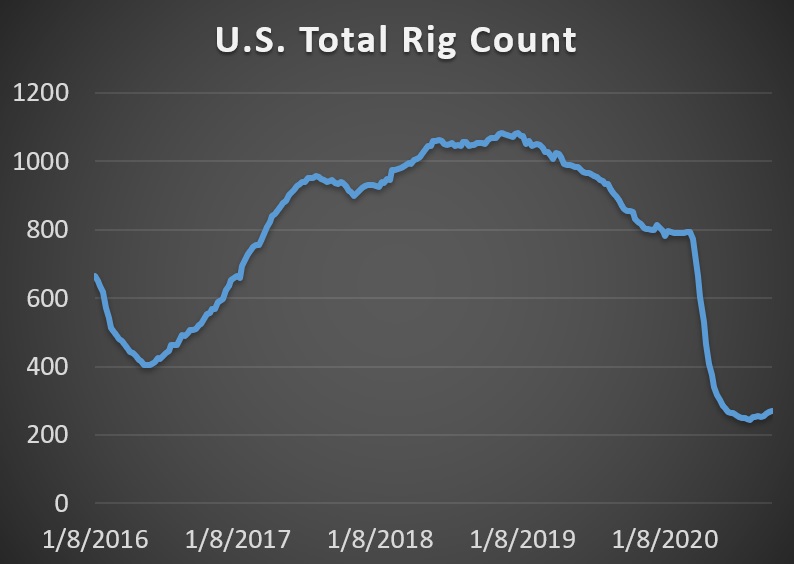 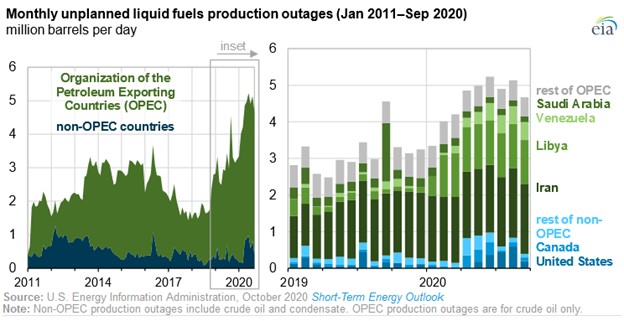 –    Oil production outages have increased in 2020, cutting into global supply.

–    Much of the increase in outages came from Libya, Venezuela and Iran. Supply “disruptions” does not include production shuttered because of economic reasons.

–    ExxonMobil (NYSE: XOM) was upgraded by Goldman Sachs to a Neutral rating after the oil major’s shares have declined so significantly. The company’s headwinds are now priced in, Goldman says.

Oil prices sank on Monday on concerns of a return of supply from Libya, although the decline was also a correction after strong gains last week. In early trading on Tuesday, prices were back up on some positive oil import news from China.

Oil rises on Chinese imports. China’s customs data shows monthly crude imports rose 2.1 percent in September, a stronger figure than expected. But the data could be less bullish than at first glance as the increase can be chalked up to the clearing of a shipping bottleneck. Looking forward, analysts see imports easing. “We find that China’s record haul of crude growth is poised to cease as independent refineries have nearly fully utilized their state-issued import quotas and companies struggle with extremely high crude inventories,” Rystad Energy said in a statement.

Oil stuck below $43 until the election. The international oil benchmark Brent Crude will likely range-trade in the $40 to $43 a barrel band until after the U.S. election on November 3, according to OCBC Bank.

EQT upgraded on tight winter supply picture. Morgan Stanley upgraded EQT (NYSE: EQT), the largest natural gas producer in the U.S., noting that the upcoming winter could create the tightest supply picture in a decade. The bank upgraded EQT to an Overweight rating.

IEA: Demand hit permanently from COVID. The IEA released its annual World Energy Outlook, which offers analysis on long-term energy scenarios. One of the main takeaways is that oil demand suffers a long-lasting hit from the pandemic. The agency sees demand returning to pre-pandemic levels by 2023 or 2025 in a more delayed scenario, but either way, demand peaks sooner and at lower levels than previously thought. The most oil-friendly scenario sees demand plateauing by 2030. “The era of global oil demand growth will come to an end in the next decade,” IEA Executive Director Fatih Birol said. Related: Goldman Sachs: Biden Win Is Bullish For Oil

IEA: Solar is “king.” The agency also said that solar is now cheaper than coal and natural gas in most parts of the globe. By 2030, renewables will capture 80 percent of new power generation. “I see solar becoming the new king of the world’s electricity markets,” Fatih Birol said.

Credit redeterminations to fall 10-20 percent. A new survey from Haynes and Boone finds that shale executives expect their credit lines to be cut by 10 to 20 percent, a light improvement from the spring survey. 17 companies filed for bankruptcy in the third quarter.

Libya returns oil to the market, but risks remain. According to various oil analysts, Libya’s oil output might recover to at least 500,000 bpd by the end of this year and even to over 1 million bpd shortly after that. However, geopolitical risk has not diminished, and outside powers could derail the fragile agreement.

Goldman: Biden bullish for oil. The conventional wisdom is that a Biden administration is negative for the oil industry due to promises for clean tech spending and more regulation. But Goldman Sachs says a Biden win is bullish for prices due to higher costs on shale supply, including blocking drilling on federal lands. Any supply impact would push prices up.

Companies move to restore Gulf output. After Hurricane Delta swept through the Gulf of Mexico and made landfall in Louisiana, energy companies are now in the process of restoring operations.

Azeri pipelines at risk from war. A few long-distance pipelines, including the Baku-Tbilisi-Ceyhan pipeline, could be at risk from the conflict between Azerbaijan and Armenia. “The pipelines are laid two meters underground, so there is protection there from material damage. However, while it is still too early to forecast possible production disruptions at the offshore ACG and Shah Deniz fields, any scenario where Armenian forces manage to take over territory traversed by export pipelines represents a potential threat to oil and gas exports in the region,” says Rystad Energy’s upstream analyst Swapnil Babele.

Equinor criticizes its own U.S. strategy. Equinor (NYSE: EQNR) says that its U.S. onshore strategy over the past decade of aggressive growth came at the expense of “value creation.” Between 2007 and 2019, the Norwegian oil company lost $21.5 billion on its U.S. campaign.

Shale binge hurts reserves. The fracking frenzy has permanently hurt U.S. oil and gas reserves, according to Wil VanLoh, managing director of Quantum Energy Partners, a private equity firm which, through its holding companies, is the biggest American driller after ExxonMobil. Too much fracking has “sterilized a lot of the reservoir” in North America, he said, according to the FT. “That’s the dirty secret of shale.”