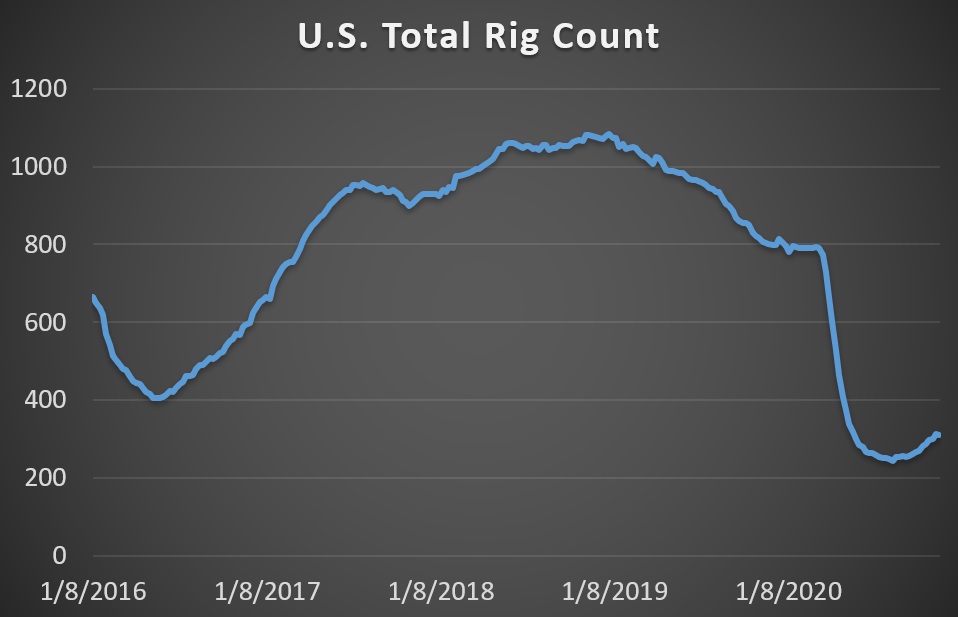 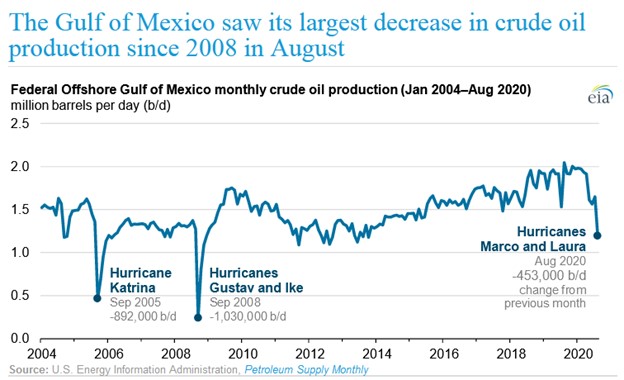 –    In August 2020, U.S. offshore production fell by the most on a monthly basis since September 2008, due to several hurricanes.

Oil prices rose to their highest levels since March, with WTI nearing $45 and Brent topping $47. Oil prices surged on the potential for a third highly-effective coronavirus vaccine. Also, the seeming end of the election drama also boosted sentiment, as investors hoped for more stimulus under the Biden administration. “By some time in the middle of next year, the economic environment should really move quite rapidly toward normalization, which ultimately means that demand for petroleum products should start to recover,” Bart Melek, head of global commodity strategy at TD Securities, told Bloomberg.

Bakken struggling at $40. Prices need to get “above $45/bbl for completion of drilled-but-uncompleted (DUC) wells, and we need to see $55/bbl oil, in general, to drill new wells and complete them,” Lynn Helms, director of North Dakota’s Department of Mineral Resources said, according to NGI. Related: Oil Prices Leap Higher On Fresh Vaccine Hopes

UAE eyes 5 mb/d. The UAE said that recent discoveries from state-owned ADNOC could help boost oil production to 5 mb/d by 2030.

China seeks to become world’s largest refiner. “China is going to put another million barrels a day or more on the table in the next few years,” Steve Sawyer, director of refining at energy industry consultancy Facts Global Energy, told Bloomberg in an interview. “China will overtake the U.S. probably in the next year or two.”

Venezuela arrests oil workers. Venezuela’s regime has recently arrested oil workers or retired oil workers who have dared to expose the corruption and mismanagement at its state oil firm PDVSA and its dire financial, operational, and working conditions.

IMO to ban fuel oil in Arctic. The International Maritime Organization (IMO) approved on Friday a ban on the use of heavy fuel oil for ships in the Arctic, but environmental organizations slammed the new regulation as “riddled with loopholes.”

EU pushes back on U.S. LNG. A recent U.S. LNG deal with Europe was scuttled over concerns about methane emissions. It may not have been a one-off. Politico reports that U.S. LNG is running into trouble across the European Union. “There’s a real sensitivity in the EU about fracked gas,” one industry executive told Politico. The incoming administration “would be well advised to prioritize that. If [customers] can’t use U.S. gas, then they’re using Russian gas and Mideast gas.” The Biden administration’s attempts to regulate methane may be unwanted by U.S. drillers, but it may help gas exporters access European markets.

READ ALSO  Has Big Oil Turned Its Back On Alaska?

CFTC released report on April flash crash. The Commodities Futures Trading Commission (CFTC) released a report on the April crash in WTI prices into negative territory. One of the commissioners criticized the report as inadequately addressing the root causes.

Total to shut refinery. Total (NYSE: TOT) will shut its Donges refinery due to the market downturn.

Oil lobby says it will fight fracking restrictions. The American Petroleum Institute will use “every tool at its disposal” to combat potential restrictions on federal lands for drilling under the Biden administration.  Related: Growing Crude Inventories Put A Cap On Oil Prices

Canada’s oil and gas sector sees record job losses. A total of 37% of oil and gas companies in Canada resorted to permanent layoffs due to the pandemic-driven oil price and oil demand slump, a recent survey of energy labor market organization PetroLMI showed.