I haven’t updated the inflation numbers for a while. COVID-19 has probably made it difficult to say too much, because there are so many compositional shifts in the demand basket. But I think it is worth taking a look at what is happening in rent inflation. 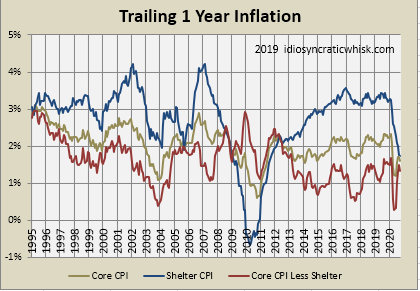 Much of the drop in the stated core CPI number is coming from declining rent inflation (or shelter inflation). Core inflation excluding shelter is still below 2%, so the Fed has room to goose spending within their mandate. Trailing 12-month shelter inflation has declined from about 3.4% to 1.7% since the COVID-19 outbreak, and the run-rate may not be positive.

Real-time data suggests that much of this appears to be related to some amount of exodus from expensive cities like San Francisco and New York City. However, declining CPI-measured rent inflation is pretty evenly distributed among the major metro areas.

There are three periods of sharply declining rents in this period, and it is interesting to compare them. In 2002-2003, construction was hot and new supply was bringing down rents in cities with elastic supply (Dallas and Atlanta, but not New York and LA). Then, from 2008-2010, the foreclosure crisis and the sharp tightening in lending markets created a negative demand shock for shelter, driving down rent inflation everywhere. That was associated with very low rates of construction.

Now, the decline in rent inflation is associated with low but moderately rising construction activity. If that continues, it would suggest that lower rent inflation is mostly due to income shocks and the specific character of the COVID-19 context, where landlords may be opting for more leniency until the market settles. If there really is a persistent shift of housing preference into less dense cities and housing units, then that should be associated with rising demand for shelter and more construction, not lower rents. In that case, there would be a compositional shift out of the expensive cities, and rent inflation might decline as tenants leave the expensive cities (pulling rents there down) and move to cities where new demand is met by supply rather than price inflation. The fact that rent inflation is currently declining in cities like Phoenix, which we should expect to be the destination for some of those moving tenants, suggests that income shocks are more important now than inter-MSA migration.