The Offshore Market Is Yet To Improve

Following the pandemic, the low crude oil price level, and the potential reductions in customer spending, the demand for Oceaneering International’s (NYSE:OII) products and services declined. Currently, there are two clear headwinds: low ROV utilization rate and low day rate in the industry. On top of that, the company’s non-energy segments are suffering from uncertainty due to low economic growth.

On the other hand, offshore opportunities may emerge in some of the international regions. OII has deployed various cost control measures to mitigate the pressure on margin in the medium term. Plus, higher sales in the government sector were a positive sign in recent times. Although the company has sufficient liquidity, an overly leveraged balance sheet, coupled with negative FCF, increases the stock’s risk factors.

I think the returns from the stock price can decline, but the downside is limited because of the advantages in the company’s diversified business model. Over the medium to long term, I think returns can improve if the crude oil price does not crash again.

The Current Challenges And OII’s Response 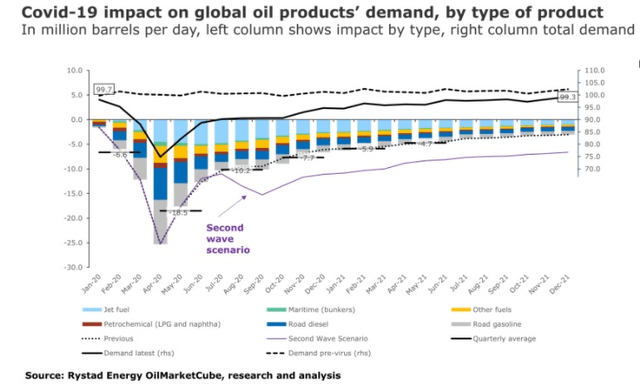 According to a Rystad Energy report, offshore markets will maintain an overall flattish level towards 2025. In another report, Rystad estimated the offshore drilling industry would see up to 10% of their contract volumes canceled in 2020 and 2021 following the COVID-19 epidemic and the ongoing oil price. Despite the low-to-flat activity in the U.S. Gulf of Mexico (or GoM), Brazil, Australia, and China can see 20% to 40% growth prospects for offshore drilling. Investors may note that OII runs its multiservice vessel Ocean Evolution in the GoM. Read more about the company’s business in my previous article here.

In response to those challenges, OII is implementing various cost reduction initiatives by resizing and restructuring our businesses. Earlier in the year, it targeted to save in the range of $125 million to $160 million in FY2020. Its actions involve efficiency enabling projects, operating structure simplification, compensation reductions, and other cost reduction activities. By 1H 2020, ~$85 million of annualized cost reductions have been initiated. On top of that, it is likely to benefit from an additional $35 million to $40 million in reduced depreciation expense. However, the operational restructuring costs associated with some of these measures would cost the company $50 million. 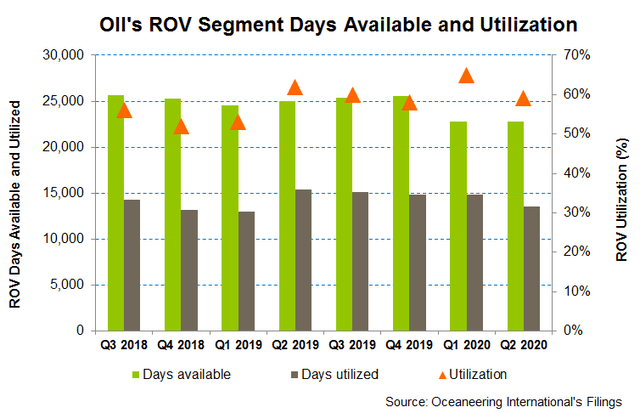 The ROV utilization level for OII fell again in Q2 2020, after recovering briefly in Q1. It declined to 59% in Q2 from 65% in Q1, while the average ROV revenue per day also decreased. So, the ROV segment revenue decreased by 12% in Q2 compared to a quarter ago. As industry activities dissipated, fewer mobilizations and increased standby days led to a lower operating margin (6%) in Q2. The company kept its fleet size also fell sharply in Q2. By the end of June, the number of working floating rigs came down by 21% compared to March 2020. However, the drill support market share remained unchanged in Q2.

However, the company did not extend much pricing concession in Q2, and the day rate did not deteriorate. The revenue fall was a function of lower active days due to the effect of COVID-19. In the coming quarters, the company plans to put fewer people on the job and will operate an RWOCS (ROV Workover Control Systems) or an IWOCS system, which enables remote operation of subsea well equipment. These steps will reduce costs and can help drive margin in the future. 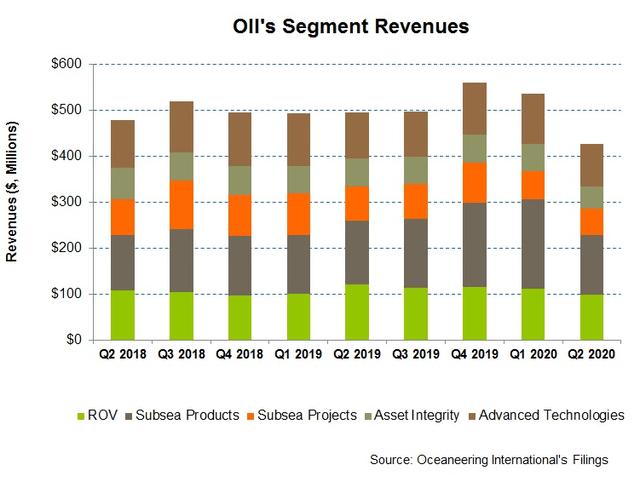 In Q2 2020, the segment was the worst performer by sales among OII’s segments. The top line suffered from the delayed receipt materials, various project delays, and decreased working hours following the new health protocol. The book-to-bill improved to 0.83x compared to 0.5x in Q1 but is still significantly below the 2019-level (1.5x). A higher ratio implies improved revenue visibility.

OII’s non-energy business continued to disappoint the investors for the past couple of quarters as the business buckled under a lack of demand. Compared to Q1, revenues in Asset Integrity decreased by 19% in Q2, while it decreased by 15% in the Advanced Technologies segments. These two segments together accounted for 33% of the company’s Q2 2020 revenues.

Following the coronavirus outbreak, the projects in China and some of the other regions have become vulnerable, while the timing of project awards and postponement in project awards affected the top-line. However, its sales to the government sector and the positive impact of cost reductions helped reduce the operating loss in the Asset Integrity segment in Q2 (operating loss decreased to 5% from 185% in Q1).

OII revised down its FY2020 capex budget to range between $45 million and $65 million, which is nearly 63% lower compared to FY2019 (at the guidance mid-point). Although revenues remained roughly unchanged in the past year until 1H 2020, significant deterioration in working capital nearly wiped out cash flow from operations (or CFO) in the past year. The change in the timing of project milestones and customer payments drained out the CFO. As a result, free cash flow (or FCF) turned negative. Although the company has sufficient liquidity, it might want to strengthen FCF to avoid further strain on the balance sheet in the medium to long term. 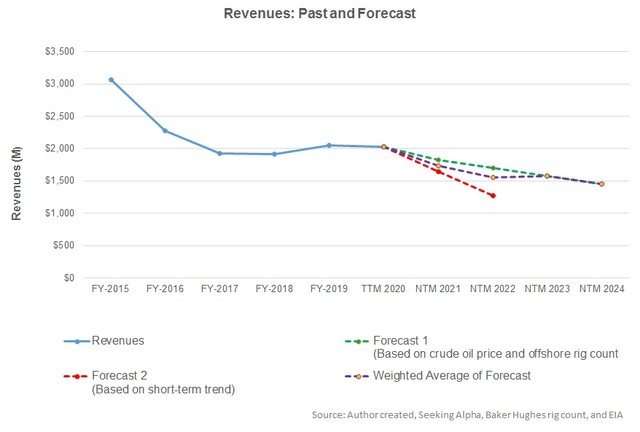 I have observed a regression equation based on the historical relationship among the crude oil price, U.S. offshore rig count, and OII’s reported revenues for the past five years. I also observed the previous four-quarter trend. I think long and short trend factors will have equal weight initially, but the short-term factor will lose importance after that. Based on the model, I expect revenues to decrease in the next couple of years. It can improve moderately in 2023. 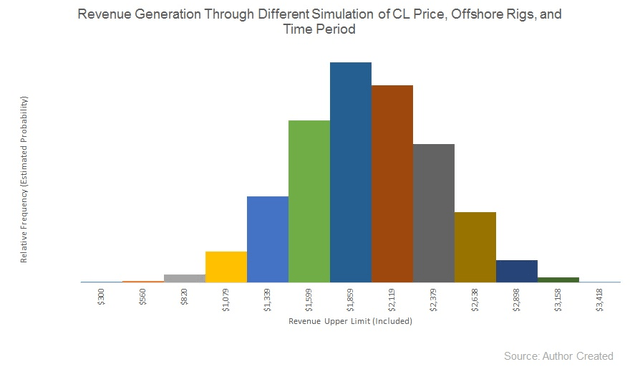 In the Monte Carlo simulation, after 10,000 iterations, I find that the maximum frequency ranges between $1.59 billion and $2.36 billion. The trailing-12-month (or TTM) revenue falls within this range. Investors, however, should note that this is only an academic exercise. 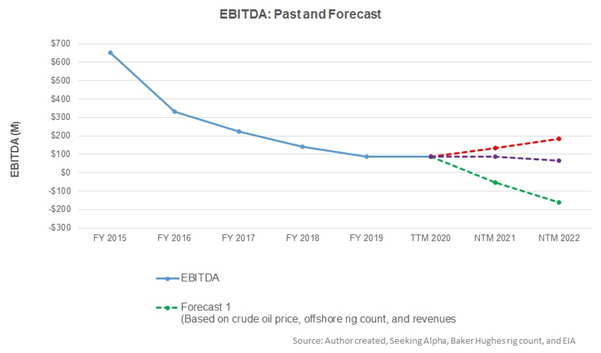 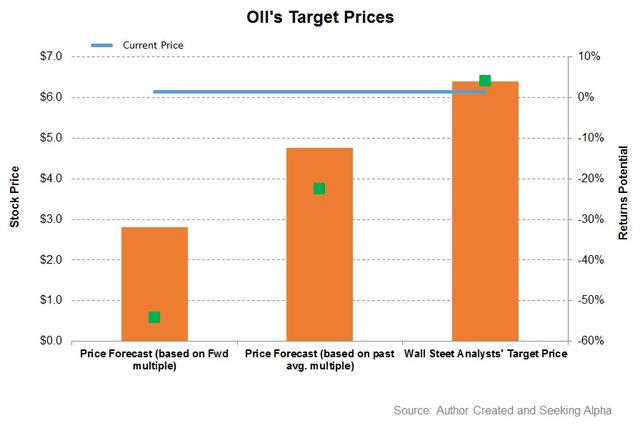 Returns potential using the price forecast based on the forward multiple (8.54x) is lower (54% downside) than returns potential (22% downside) using past average EV/EBITDA multiple (10.7x). In comparison, Wall Street’s sell-side analysts expect marginally positive returns (4% upside). I think the stock has a negative bias in the short term. For the forward multiple and the sell-side analysts’ target price, I have used Seeking Alpha’s estimates.

OII’s forward EV-to-EBITDA multiple contraction versus the adjusted trailing 12-month EV/EBITDA is in contrast to peers, which would typically result in a higher EV/EBITDA multiple compared to peers. The company’s EV/EBITDA multiple (14.6x) is lower than its peers’ (OIS, Superior Energy Services (NYSE:SPN), and TechnipFMC (NYSE:FTI)) average of 20.3x. The stock is relatively undervalued at the current level, which means the market ascribes more upside than my model does.

What’s The Take On OII?

By the end of Q2, the offshore industry’s narrative did not change much from the previous quarter. And, so is OII’s outlook. While the U.S. GoM is going through a low-growth period, a few smaller pockets of growth will have emerged in some of the international regions. However, the current downturn following the pandemic will not allow the day rate to improve. Plus, the ROV utilization level dropped in Q2, creating a further bottleneck for the revenue growth. On top of that, the company’s non-energy segments are suffering from the uncertainty in theme park projects due to low economic growth.

OII has deployed various cost control initiatives, including significant capex reductions, which will mitigate much of the pressure on margin in the medium term. Plus, higher sales in the government sector were a positive sign in recent times. However, in an alarming turn of event, its free cash flow turned negative in the first half of the year. An overly leveraged balance sheet, coupled with negative FCF, can spell trouble in the current environment.