Occidental Petroleum: The Bottom Is In (NYSE:OXY)

Occidental Petroleum Corporation (OXY) like most other oil companies, has been hit from all sides during this COVID-19 crash. As if it wasn’t bad enough that the world was coming to a halt, the price of oil fell to $20 a barrel as well. From the time the crash started on February 18, the stock fell as much as 80%. It is currently only down 70% thanks to a 50% rally in crude over the last couple days that carried the stock back up with it. Occidental has been announcing cut after cut – rather it be general spending, dividend cuts, or salary cuts – to bring down its capital spending. Doing so is going to put it in a spot to thrive in a low oil price environment and bring it out ahead as the price of oil recovers over the next few years. I believe the bottom is in. 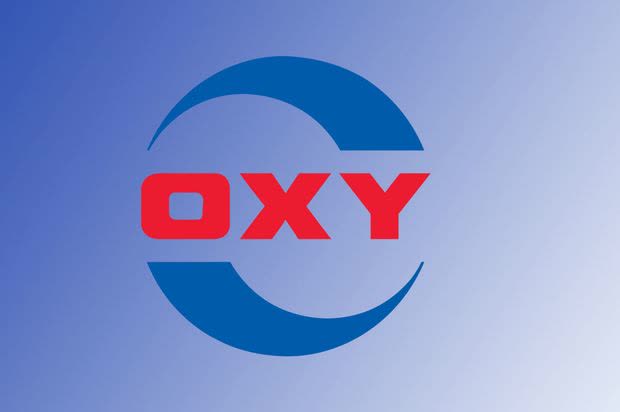 Occidental Petroleum Corporation was founded in 1920 and is headquartered in Houston, Texas. Together with its subsidiaries, it engages in the acquisition, exploration, and development of oil and gas properties in the United States, the Middle East and Latin America. The company operates through three segments: Oil and Gas, Chemical, and Marketing and Midstream. The Oil and Gas segment explores for, develops, and produces oil and condensate, natural gas liquids, and natural gas. The Chemical segment manufactures and markets basic chemicals, some of which are chlorine, caustic soda, chlorinated organics, potassium chemicals, and ethylene. The Midstream and Marketing segment gathers, processes, transports, stores, purchases, and markets oil, condensate, NGLs, natural gas, carbon dioxide, and power. This segment also trades around its assets consisting of transportation and storage capacity and invests in entities. The current market cap is $11.7 billion.

The Price of Oil

It is no secret that oil stocks like Occidental are positively correlated with the price of oil. One of the downsides to being a commodity stock is that the commodity holds a majority of the cards at the end of the day and it comes down to managing that commodity in terms of hedging and capital expenditures better than your peers. Going long any oil company is really a bet on oil itself, and maybe you can get a dividend out of it as well without owning the commodity itself. 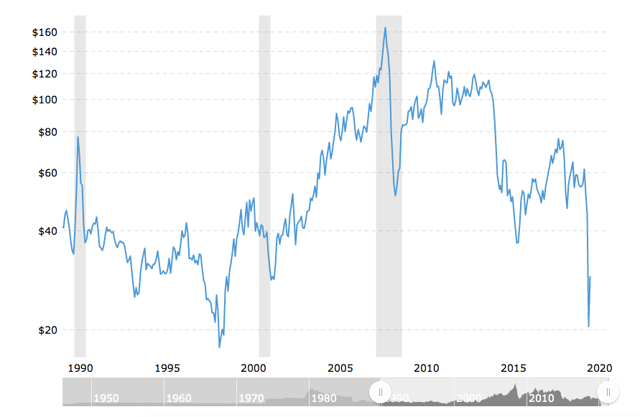 As you can see above, over the past 30 years, oil has been everything but tame. The price fluctuates heavily and has for decades. The average price lands around $50-70 a barrel. We all know that $20-30 oil is not sustainable for almost anyone and it will not last at these levels just like it has not over history. I fully expect oil to get back to $30-40 once OPEC+ can figure out what it is going to do. I see $50-60 being a level we can get to in the next few years. The exact timing is impossible to predict but you can bet on oil recovering.

The demand is going to decline slowly over the next 20+ years as the world moves more towards renewable, but there is still going to be a need for oil to some extent as time moves on. I do not think we will see $100+ oil again, but all it takes is a couple of world events to collide and create the perfect storm and the price could skyrocket. Kind of what we are seeing now, but opposite.

The $600 million this time around is coming from cutting corporate costs, including significant salary reductions for executive leadership. Operating cost reductions are expected to lower 2020 domestic operating costs to approximately $7.00 per BOE. President and Chief Executive Officer Vicki Hollub had this to say:

We are making solid progress with additional cost reductions to help withstand the low commodity price environment and other macroeconomic pressures impacting our industry and the global economy,” “Based on our team’s recent efforts, we now expect to significantly lower our costs in all aspects of the business. We will continue to take actions as necessary to further strengthen our balance sheet and ensure the long-term viability of our business.”

What this says to me is that it is keeping an open mind and is willing to cut costs even further if it is needed to lower the breakeven price even further, if we are stuck in a sub $30 WTI oil environment longer than anyone is expecting. This is a good thing, but it does have to be mindful of cutting too much.

The company announced a reduced dividend of $0.11 per share effective with the next dividend payment in July as of March 10. This was an 86% cut coming down from $0.79 per share. The dividend has not been cut since back in the 1990s. This action was needed in a bad way to protect the balance sheet due to the environment we are currently in. Between the oil price war and the effects on demand due to COVID-19, the company was left with no choice.

It is important that the company did not erase the dividend entirely. As soon as it does that, there are a large number of “dividend funds” that would have no discretion with regards to whether or not the fund could still hold the stock. This cut along with the cuts to capital spending mentioned earlier will allow Occidental to lower its breakeven on a cash flow basis closer to $30 WTI, which allows it to have success in a low price environment.

Like most oil-related stocks, Occidental has been in an ugly downtrend full of peaks and valleys since 2011, where the stock peaked at $117 per share, and a barrel of oil was going for $112. Fast forward to today, where the stock is now worth $13 per share (89% decrease), and a barrel of oil is worth $28 a barrel (75% decrease). As mentioned above, the stock has been punished heavily by both the COVID-19 correction and low oil prices. The stock sold off 80% at its worst since the market crash began on February 19. Since bottoming on March 18, the stock has popped up 45% to where we sit as of Friday’s close. Below is a chart that shows just how volatile the stock has been for the last half of March.

Even with this wild volatility, the stock still appears to be forming a base. What is wild is if we zoom out to a monthly view, as shown below, we can see that this range is where the stock traded between for the better part of 20 years!

Yes, I know it is not perfect, but it is still a little mind-blowing that we are trading in the same range as investors were dealing with in the ’80s! Let me clarify by saying I do not think that we are going to be stuck in this current range for the next 20 years, but it is good to know there is solid price support at these levels. I will say that the stock may see some resistance at that $15.30 level though. Looking below, we can see a bit of a closer look dating from 1986 to 2004. There were 5 different tests of the $15.30 level I have marked before the stock finally broke through and ran up almost 600% before the financial crisis.

The good news here is that there is also a lot of bottom support. It would take a 30% decline from current levels to hit the low the stock set on March 18. If we look back much like we did with the ceiling, we can see that there is roughly another 8% lower from our current lows worth of support. If we do re-test the lows, this is where I would expect the stock to fall to. But I do not anticipate that happens unless the price of oil collapses again. It would appear as if the bottom is in.

Now let’s talk about the potential rebound in price action. There is a long way to go before the 200-day moving average becomes something that may provide resistance, but you can bet on it being a tough line to cross when that time does come. Looking back we can see it has proved as both support and resistance over time. It currently has an ugly downtrend due to the stock’s poor performance over the last couple of years, but when it catches up, any type of cross and successful re-test will be a bullish move long term.

As you can see, Occidental is doing all of the right things in order to get its breakeven as low as possible to thrive in a low oil price environment. There is only so much the company can control due to the price of oil being so volatile. The stock is positively correlated to the price of oil, and as oil rises, so will the stock price. The price is locked in a range of solid support that should hold the bottom, barring another oil price collapse. The company will survive 2020, and investors will see the stock price slowly grind higher as the year goes on as the effects of COVID-19 wear off, and we return to some sort of state of normalcy. Oil demand will rise, and the price will slowly climb with it. If you are in it for the long haul, this is a very attractive stock to own right now. Stay safe out there!