Nvidia’s RTX 30 Series Could Ignite An Upgrade Cycle Like No Other (NASDAQ:NVDA)

Nvidia (NVDA) revealed brand new graphics cards a few weeks ago, announcing the launch of the GeForce RTX 3070, RTX 3080, and RTX 3090 graphics cards. Nvidia claims these cards are the greatest single generational leap in performance in the company’s history. 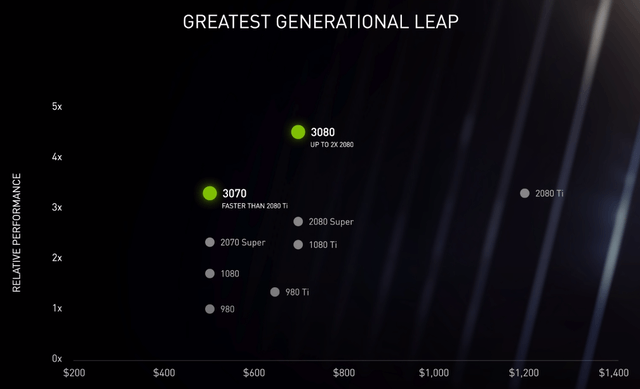 This, of course, has gamers excited after a lack-luster 20 series of cards. Here are three reasons this could result in Nvidias strongest sales upgrade cycle ever!

The first reason this could be a very successful launch for Nvidia is the mere fact that people are, for the most part, staying at home more often during the COVID-19 pandemic. This means people are looking for entertainment options inside their own homes like video games. Even better is the fact that one can play games with multiple friends at once, all from different locations. The friend group no longer has to venture out to find entertainment together, they can all game from their own home.

Of course, one needs a console or a PC to play games. When the pandemic picked up early this year, RTX 20 series sales began to pick up as gamers realized they needed to upgrade their PC to play the latest games at the highest quality. As I’ll get to in a moment though, RTX 20 series cards were somewhat underwhelming, leaving many gamers to opt out of an upgrade. That is, until now. With major performance increases in RTX 30 series cards, and far more affordable pricing, Nvidia should benefit from more people than ever before looking to upgrade an existing pc or build a brand new one with new, more affordable, better performing RTX 30 series graphics cards.

RTX 30 series cards leave the previous generation of cards in the dust when it comes to performance, especially with ray tracing (one can essentially think of ray tracing as the way games or images render artificial simulated light). While Nvidia may have exaggerated the performance somewhat in their reveal and marketing material, independent third parties, like Gamers Nexus, (youtube video below), have verified strong performance numbers in multiple applications from the new RTX 3080 card (other cards have yet to release as of the time of writing).

Assuming the 3070 and 3090 follow in the same path, these cards should also see solid performance boosts over previous cards. Nvidia claims the RTX 3070, this generation’s mid-tier card, even beats last generation’s high-end flagship 2080 Ti (though consumers should probably wait for full reviews of the 3070 from third-parties). Finally, the RTX 3090 represents the absolute best technology Nvidia has to offer right now.

Nvidia priced last-gen RTX 2080 Ti cards at around $1200 USD. A very steep price for most consumers. Combine this with a lack-luster performance upgrade and Nvidia didn’t quite see the unit sales the company wanted. It looks like Nvidia has realized that this time around pricing the 3080 at just $699 USD for performance that exceeds the $1200 2080 Ti. This is a far more digestible price at its given performance level. Furthermore, the 3070 card, which supposedly beats the 2080 Ti is just $499. That’s less than half the price of the 2080 Ti, making it a clear upgrade path for those still on older generations.

The compelling prices here are almost certain to entice gamers to upgrade as soon as possible. In fact, 3080 cards sold out within minutes at launch, with most buyers saying they couldn’t even get one. It certainly looks like gamers are ready for this generation. Nvidia now just needs to keep up to demand.

Finally, let’s not forget that AMD (AMD) is announcing new RDNA 2 graphics cards as well in late October. Nvidia beat AMD to launch this year, but AMD might have something compelling, especially at the lower to mid-tier. This could very well disrupt Nvidia’s product stack, especially if Nvidia can’t catch up to demand.

Nvidia is expected to grow revenue around 45% this year (ends Jan 2021) and 18% next year, although if the pandemic continues into next year I could see RTX 30 series momentum carrying well into most of next year leaving the potential for a beat in fiscal 2022.

While this is certainly near the higher side of Nvidia’s historical multiple, the company does have the growth rate that perhaps justifies such a multiple. The stock itself is now near $500, down somewhat from the high of around $580 per share. This could be a decent buying opportunity for long term believers in Nvidia and I think the stock becomes very compelling if it pulls back a little more, perhaps as much as $400 per share. Of course, that might not happen, as tech stocks continue to remain hot during the pandemic.

I’ll be writing more articles on great (or sometimes not so great) stocks and ETFs. If you enjoyed this article and wish to receive updates on my latest research, click “Follow” next to my name at the top of this article. Also, consider checking out the links to my social media pages on my Seeking Alpha profile.

Disclosure: I/we have no positions in any stocks mentioned, but may initiate a long position in NVDA, AMD over the next 72 hours. I wrote this article myself, and it expresses my own opinions. I am not receiving compensation for it (other than from Seeking Alpha). I have no business relationship with any company whose stock is mentioned in this article.

READ ALSO  Latino Business Owner: This Election Is Not About Donald Trump
Previous PostVirtually Insane: 12-Year-Old Louisiana Boy Suspended After BB Gun Spotted In His Room By TeacherNext PostIs Switzerland in Europe? – Upcoming referendums will show how the Swiss may relate to the EU | Europe