Nvidia (NVDA) Q1 revenues came slightly ahead of guidance ($3.08B vs. $3.0B) and EPS also came in ahead of expectations ($1.47 vs. $1.37 GAAP). The highlight of the beat was strong datacenter performance with revenues of $1.141B – a sequential growth of about 12%. However, outside of the datacenter performance, there is little to cheer for in the company’s results or guidance.

In Q1, the company completed the acquisition of Mellanox, which adds a significant new revenue stream to Nvidia. See Mellanox recent revenues in the image below (all images in the article, unless specified, are from the company’s Q1 earnings release materials). 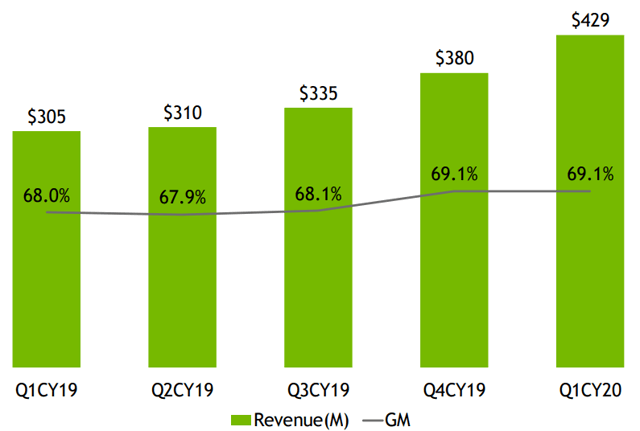 For Q2, management guided that low-teens percent of total Nvidia revenues will be from Mellanox. With Q2 guidance of $3.65B, assuming low-teens means 14%, the guidance suggests that Mellanox could contribute about $511M in Q2. This further implies that, excluding Mellanox, Nvidia Q2 guidance is about $3.14B. The 2% implied growth is disappointing for a “growth” company with a stratospheric PE ratio in what should be an up-quarter due to strong datacenter and work-at-home trends. This lack of growth is also below consensus expectations.

There is a big red flag in Q1 earnings that could explain the low Q2 growth. Note from the image below that account receivables jumped to $1.91B in Q1 compared with $1.66B in Q4.

Note that the big jump occurred on slightly lower revenues which makes the AR change unusual. At nearly $2B, and almost 2 months of DSO, accounts receivables are now at a level not seen since the crypto meltdown in FY 2019. This suggests that there was likely a quarter-end sales push in Q1 possibly to meet the numbers. This appears even more likely when one considers that Q2 guidance, excluding Mellanox, is flat. Combination of these two factors strongly suggests Nvidia’s Q1 beat was likely a result of quarter-end pull-in.

Fundamentally, we continue to believe the company’s growth story is long broken and is being missed by investors. This is true even after acknowledging that datacenter revenues grew solidly from $968M in Q4 to $1,1141M in Q1. While the datacenter business is showing signs of life after two years of stagnation, note that this growth does not fundamentally change the overall growth profile of Nvidia.

While the table above only captures 8 quarters of data, we observe that Nvidia posted $2.911B of revenues in Q4 FY18 and nine quarters later, in Q1 FY21, the company’s revenues are at $3.08B. The trajectory is worse when it comes to earnings (image below from YCharts).

The stock has been running up on expectations of growth which the company has failed to deliver for over two years now. The discrepancy between earnings and stock price has become even more acute in the recent past (image below from Yahoo Finance) 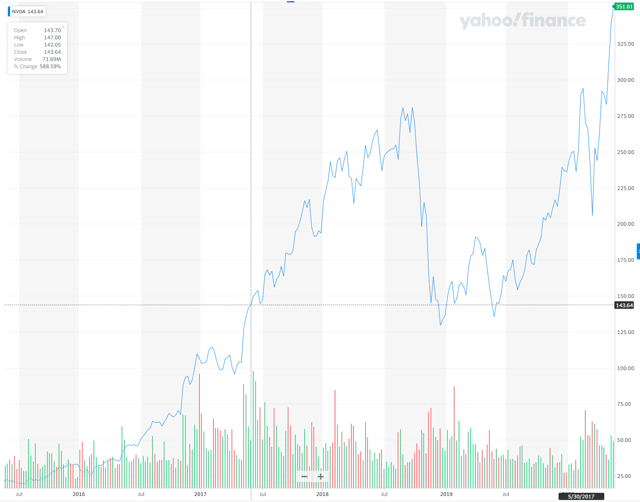 As such, the company has not even reached the levels of profitability it has seen in 2018. Nevertheless, the stock has continued to run since then.

The perceived trajectory is going to change in Q2 with Mellanox numbers, but this is not organic growth. At the root of it, market’s expectations of the company’s growth are not realistic. Let us look at the segment revenue table above and consider the gaming numbers. Gaming dropped from $1,805M in Q2 FY19 to $1,339M in Q1. The growth in datacenter was more than offset by the reduction in crypto and gaming declines. We would argue that what we are witnessing is not just crypto bust and seasonality but market share losses to Advanced Micro Devices’s (AMD) recently released GPU products.

We believe the market’s expectations of gaming as a growth business for Nvidia will be found wrong with the launch of increasingly competitive products from AMD and Intel (INTC). On the console front, there is a realistic chance that Nintendo Switch volumes will hurt a bit with the launch of new consoles from Sony (NYSE:SNE) and Microsoft (NASDAQ:MSFT) in H2. All in all, we expect Nvidia to have a very challenging year on the gaming front in 2020.

Note that the company’s “Auto” business has not grown in over two years despite the non-stop hype about autonomous cars. As such, management guided that this segment would see sales decline by 40% in Q2. With many autonomous vehicle development startups folding and shrinking, we expect that the progress in this segment will be far short of expectations for years to come.

If Nvidia’s gaming and auto businesses shrink as we expect them to, we fail to see how the company’s growth expectations, which are driving the stratospheric valuation, can materialize.

In addition, the company is guiding for significant increases in future opex spending, stock-based compensation, and other expenses. Nvidia is not in the habit of giving specific annual guidance, but it seems likely that COVID dynamics make H2 prospects even more challenging. These factors combined will further depress the company’s earnings power in 2020.

The company certainly has a strong AI and datacenter leadership story, but it is the valuation that makes little sense given the history of tame growth and prospects of downturn.

All things considered, the company’s valuation is in a la-la land completely disconnected with the realities of the underlying business. Nvidia has been, and continues to be, a story stock without a defensible story.

Subscribers to Beyond The Hype have access to all the linked articles that may otherwise be inaccessible. For timely, cutting-edge insights, analysis and investing ideas in technology, semiconductor, solar, battery, autonomous vehicles, and other emerging technology stocks, check out Beyond the Hype. This Marketplace service gives you early access to my best investing ideas, along with event driven and arbitrage opportunities when they are most edgy and actionable.

Disclosure: I am/we are short NVDA. I wrote this article myself, and it expresses my own opinions. I am not receiving compensation for it (other than from Seeking Alpha). I have no business relationship with any company whose stock is mentioned in this article.