Despite posting a strong quarter in terms of subscription revenue and billings growth, Nutanix (NTNX) saw their stock fall just under 10% the day after earnings. Q3 revenue and billings both grew 11% and came in ahead of expectations, though lower than expected profitability and no FY20 revenue guidance likely pushed the stock lower.

The company continues to move along their transition to a subscription based revenue model, shedding legacy hardware and license revenue streams. While this will ultimately make their revenue model more recurring and predictable, it has caused revenue growth to be minimal in the past several quarters. Investors have punished the stock significantly and is down nearly 70% since their 2018 high.

As the company continues on their transition, I believe revenue growth will start to meaningfully accelerate as the subscription revenue base becomes a larger portion of overall revenue. In addition, this revenue stream comes with higher gross margins, as signified by the 80%+ gross margin during the quarter, which I believe will become the new sustainable level.

The stock was pushed down nearly 10% the day following earnings as investors saw lower profitability and no guidance for the remainder of the year. Given the uncertainty in the economy given the global pandemic, I believe companies should be given a pass for not providing guidance and there is too much unknowns in the marketplace.

While revenue growth does remain below other software players, the company posted subscription revenue growth of 55% during the most recent quarter. This revenue stream now represents 82% of the company’s total revenue and is one area investors will continue to focus on. I believe right now, this is the only revenue stream that should matter considering the company is actively transition to subscription revenue and is moving away from hardware and license revenue.

With the stock now trading at only ~3.3x a forecasted FY21 subscription revenue, which gives no credit to hardware and license revenue, I believe there is a lot of long-term value in this name. As the company’s revenue stream becomes more recurring and predictable, margins could start to expand, and investors could start to place a higher valuation multiple on the name.

During the quarter, revenue growth showed some strength at 11% to $318.3 million, which was above expectations for ~$315 million. The company continues to move beyond their transition away from selling hardware and more towards a subscription-based model. This was evident as software and support revenue grew 18% to $314.5 million and represented almost all of the company’s revenue during the quarter. With hardware now represented a somewhat immaterial amount of revenue, the company will be able to re-accelerate their revenue growth given stronger software subscription growth.

Over the past several quarters, the company’s software and support revenue has been negatively impacted by the company transitioning to a subscription model instead of license. With their historical license model, the revenue would be received upfront, thus would be more volatile and less predictable. The new subscription based model will not only be all software, but it will become more recurring and visible, which investors have historically placed higher valuation multiples on. During the quarter subscription revenue increased 55% to $261 million. 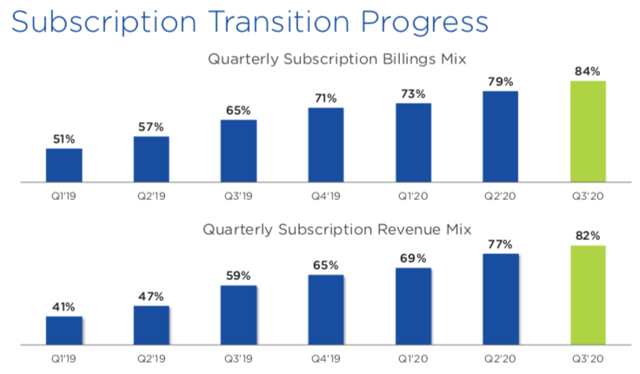 Despite the company seeing revenue growth remaining very minimal over the past several quarters given the ongoing transition, I believe NTNX has done a great job. Just one year ago, 65% of the company billings were subscription-based, compared to 84% during the recent quarter. In addition, subscription revenue now represents 82% of total, up from 59% in the year ago period. This move will ultimately pan out as the company becomes less dependent on hardware sales and license software sales.

Billings for the quarter grew 11% to $383.5.0 million with subscription billings increasing 17% to $379.7 million, representing nearly all of the company’s billings. Now that the company is largely behind their transition, investors will start to focus on the higher subscription growth trends. These trends could continue to persist in the next several quarters given the global pandemic has likely caused more companies to invest in cloud-based software solutions, rather than relying on traditional hardware products. 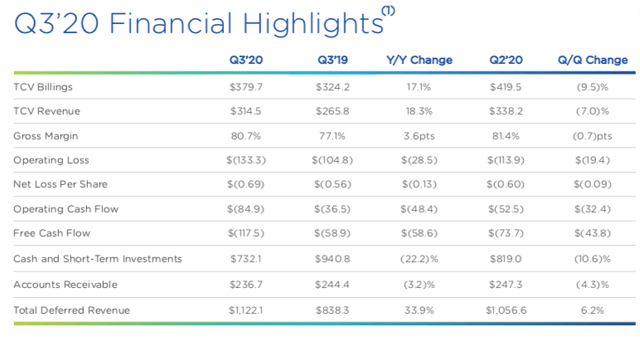 Given the many uncertainties surrounding the global pandemic, the company declined to provided updated guidance for the year. In addition, the company has many moving parts around their own revenue growth, including moving away from hardware revenue and license revenue, both of which negatively impact revenue growth. While this transition does not look good optically, it will transform the company to a software subscription revenue model, which makes revenue more recurring and predictable.

Over time, investors tend to place higher revenue multiples on companies that have highly predictable revenue streams. In addition, the software revenue naturally comes with higher margins and as the company continues to scale, they should be able to better leverage their operating expense base, thus improving margins and ultimately profitability.

After reporting earnings, the stock traded down just under 10% as investors saw another quarter of improved revenue growth, though guidance was withdrawn given the uncertainty in the global economic environment. For these two reasons, valuation continues to be challenging as investors have seen several quarters of weak revenue and billings growth. However, as hardware becomes an immaterial amount of revenue and the company continues to transition away from license revenue, I believe the company will start reporting an improved revenue growth, which is more recurring.

Over time with the larger subscription revenue base that is growing at a faster rate, investors will start to better assess the recurring revenue and highly visible nature of the new business model, which could ultimately lead to a higher valuation multiple.

NTNX has a current market cap of $4.45 billion and with ~$900 million of cash/investment and ~$460 million of debt, the company has a current enterprise value of ~$4.0 billion. Using my above FY21 subscription revenue estimate of $1.35 billion, this represents a multiple of only ~3.3x. Compared to the above group of leading SaaS players, a multiple under 4x is cheap.

Given the post-earnings pullback, I have become incrementally bullish around the name and think long-term investors should see the stock double in the next 1-2 years. As the company’s revenue becomes more recurring and visible in addition to potentially accelerating, I believe investors will start to place a higher revenue multiple on valuation.

Risks to NTNX include a slower-than-expected transition to software-only sales, though it would have a slight benefit to revenue growth and would negatively impact gross margins. The emergence of more competitors would also impact NTNX’s growth.