Canada is made up of ten provinces and three territories, with the most recent addition coming from the most Northern territory called Nunavut. Nunavut was part of the Northwest Territory but became separate in April of 1999. It is also the largest territory in Canada and the fifth-largest country subdivision in the world. Nunavut seems to be a fascinating place for more reasons than its gold production.

However, the Canadian territory has also been up and coming when it comes to gold mining although not on the same level as British Columbia or Yukon. The territory is friendly to mining despite its thorough regulations and permitting process.

Currently, there are a couple producing gold mines in addition to some exciting prospects in the region. 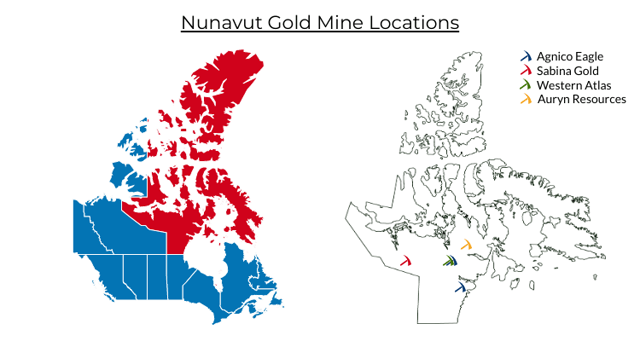 Source: Created by the author

Agnico Eagle is a company that trades with a market cap of $20 billion. They have multiple gold mines located throughout the world but have brought a focus to the Nunavut territory as they currently have two producing mines there.

Agnico Eagle Mines is the owner of the Meliadine mine, which is the company’s largest mine by reserves and just became operational in May of 2019. The mine is an underground and open-pit mine that produced 191,113 ounces of gold in 2019 with a cost of production of $750 per ounce. In 2020, they are on track to produce about 260,000 ounces with an estimated cash cost of $800 per ounce. The Meliadine mine is expected to have a 12-year mine life with current proven and probable reserves of 4.067 million ounces of gold.

Before the company began mining at Meliadine, they performed an economic analysis report in 2015. This table demonstrates the projected economics of the mine at that time. On the positive side, the gold price has risen “off the chart” and is now trading near $2,000 per ounce. However, the C$/US$ exchange rate is at .75 and is also not on the table below.

The Meadowbank Complex is Agnico Eagle’s second Nunavut mine and has been operational since March of 2010. The mine currently has proven and probable reserves of 3.318 million ounces and produced 158,208 ounces of gold in 2019 at a cost of $1,143 per ounce. In 2020, the company is on track to produce about 200,000 ounces with cash costs of $1,798 per ounce in the first half of the year. The unusually high cash costs through the first half of 2020 are due to suspended milling activities due to the declaration of a public health emergency in Nunavut. Those will likely come down significantly in the second half of the year. During the health crisis, the company was permitted to continue reduced mining activities, which may allow it to have a record production in the second half of the year.

The Committee Bay project has indicated and inferred gold resources of 1.22 million ounces. These numbers were last reported as of May 2017.

Just a few days ago, in July of this year, the company agreed to acquire Eastmain Resources, which had several exploration projects in Quebec. Auryn is going to combine Eastmain with its Canadian projects and spin out its South American projects into a separate company. The new Canadian focused company will be called Fury Gold Mines Limited.

Sabina Gold & Silver also has two projects in Nunavut. However, the company recently sold one of them called Hackett River to Xstrata Canada Corporation in exchange for $50 million in cash and a future percentage of production royalty stream.

The highlights from the Feasibility Study are in the image below, followed by a sensitivity analysis based on the gold price and exchange rate. Keep in mind this was completed in 2015. 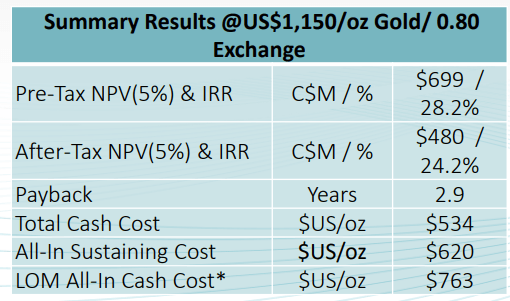 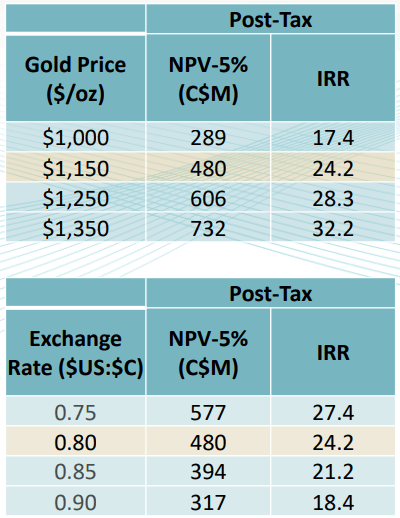 Negotiations with a particular contractor for the construction of the mine were well underway, and in the first half of 2020, they received a price estimate of $196 million. Since then, management has decided to delay negotiations and continue working on engineering details and put the project out for a lump sum bid. They anticipate this being completed in the first half of 2021.

The Western Atlas Resources Meadowbank project is an exploration stage project that sits directly next to Agnico Eagle’s Meadowbank gold mine. It’s ridiculous that they couldn’t come up with a different name for the project but left it the same as Agnico Eagle’s project.

Project naming aside, the company’s land package is significant in size with 580 square kilometers of land and is fully permitted for exploration. They are currently exploring using a 4,000-meter drill program.

2020 Resources and Reserves by Gold Mine

Nunavut is a vast territory in Canada that has a few gold mines but could have more relative to its incredible size. It could be that there just isn’t as much gold there as in other Canadian provinces, or it’s under-explored due to its location and lack of infrastructure. After all, only roughly 35,000 people inhabit the entire territory.

The other interesting gold mine on the list is Sabina’s Back River Project. The stock currently trades with a market cap of about $500 million. At today’s gold prices, the Back River Gold Project likely has an NPV of nearly $1.5 billion. The sizable discount to its future NPV and its Hackett River royalty stream, eventually contributing to cash flow, is what makes this project attractive. Given that this project is closer to production makes it even more appealing. However, it likely won’t be until later in 2022 or 2023 that this gold mine enters commercial production. Even though this project has attractive economics and other fundamentals, I believe there are better projects available in Canada. If you want to own Sabina Gold & Silver, then only buy on a significant pullback.

This concludes our look at Nunavut gold mines. If this is the first article in this series that you’ve read, we’ve already examined British Columbia as well as Yukon, and those can be read here.

If I’ve excluded any noteworthy companies from the list, please let me know in the comments section.

Previous PostSE: Delek Drilling Completes $2.25 Billion Bond SaleNext PostYou’ll Never Guess Which Country Has The Most Widespread Adoption Of Crypto In The World