Neuberger Berman Real Estate Securities Income Fund (NRO) often gets overshadowed by the success of the REIT funds from Cohen & Steers (CNS). This is one reason for the fund not getting as much coverage. That being said, this can be a way for investors seeking exposure to REITs and preferred stocks. The fund also pays an enticing distribution rate – currently almost 13%. Playing this fund’s discount and premium pricing is a better bet than a “buy and hold” type strategy. 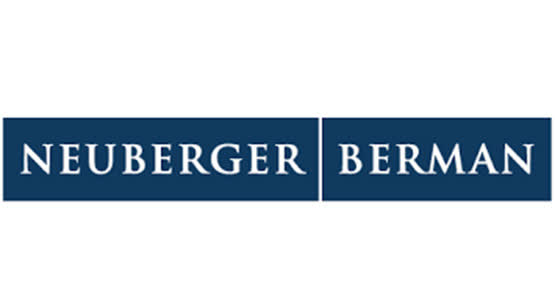 The track record of the fund is less glamorous than its peer, showing underperforming returns and more volatility. The fund suffered massively in the GFC and hasn’t rebounded similarly to the C&S fund REIT & Preferred Income Fund (RNP).

The fund’s investment strategy is “to develop a portfolio with a broad mix of real estate securities through superior stock selection and property sector allocations.” In this case, they also meet this objective as they cover plenty of industries within the REIT space quite broadly.

The fund has around $224 million in total assets. They do utilize leverage of around 13.40% currently. That is rather low and is a result of deleveraging during March. They dropped their leverage a massive 50% during the market collapse. Borrowings went from around $60 million to the $30 million now. Just as the fund reduced leverage in GFC, this should result in the same. That the fund will unlikely ever reach its pre-crisis NAV and therefore, price levels again. 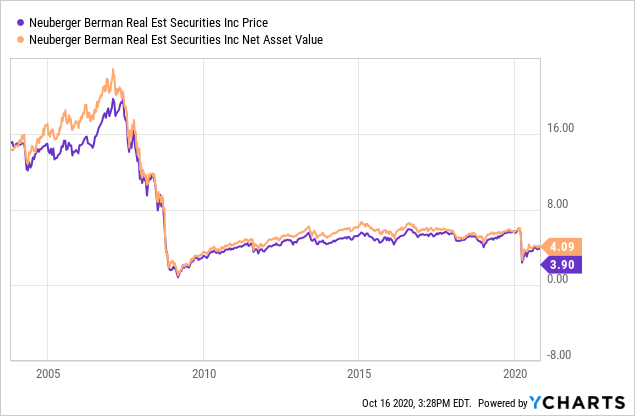 Performance – Volatility That Can Create Opportunity

Where we can get an opportunity the most with NRO is waiting for an attractive discount. In the past, I’ve held this fund and sold out when it reached premium levels earlier in the year. It has then returned back to discount territory. This was a sharp drop in March, along with many other funds too. However, since then, there was quite a rapid recovery to reaching premium levels again. Only to turn around, once again, and reaching discount levels. That is one reason to watch this fund closely. 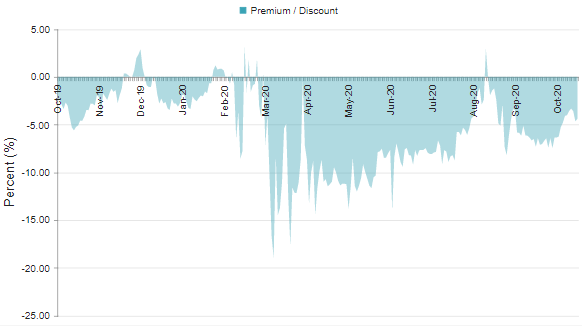 Comparing this fund with RNP during the crash between February 19th, 2020, and it is quite clear that the fund does have greater volatility. The maximum drawdown was more significant than even RNP’s significant total NAV return drop of ~43%. 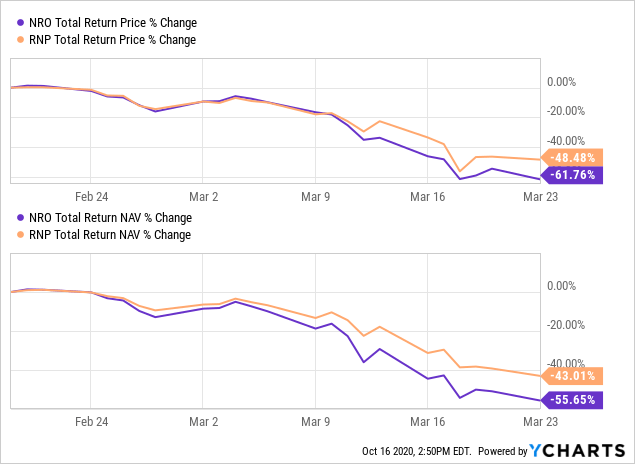 One of the significant differences here is how they rebounded. RNP took a longer time. That is while being a higher quality fund, strangely. That is what can create opportunity though is the additional volatility from NRO. Being able to harvest at discounts and premium levels that are more erratic can be beneficial for the more active investor. 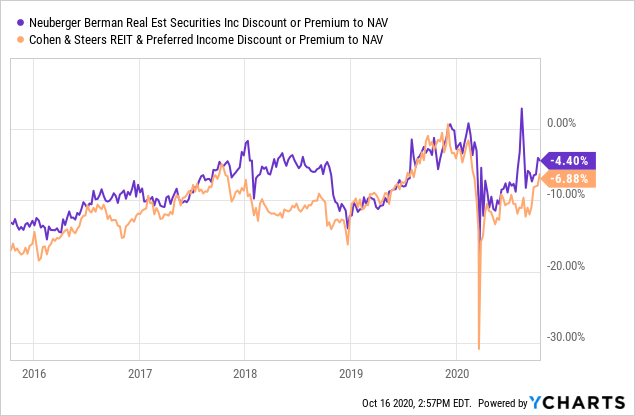 The current discount of the fund is at 4.88%. This can be compared to its 1-year average of 5.33%. Over the longer term, the 5-year average is at 7.79%. This level was last reached only a few short weeks ago. So, it really can be quite swift between when one can buy and when one might be able to sell.

The underperformance of NRO compared to RNP has been quite significant as well over the years. Comparing the two for the last 10-years can help highlight what the reduced distribution from RNP was able to achieve as far as building assets back up. 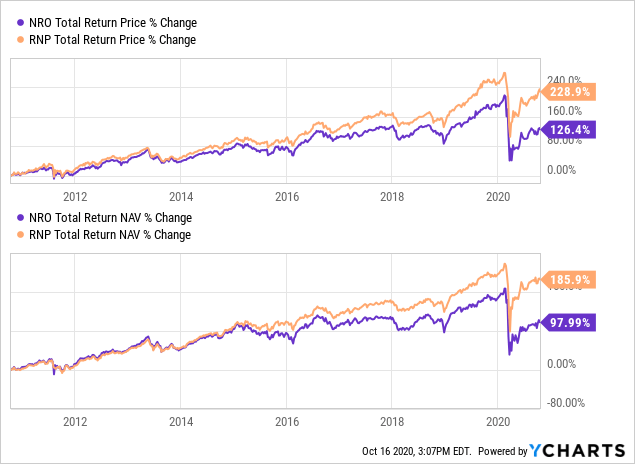 Distribution – High, But Be Cautious

The fund currently pays a distribution rate of 12.97%. The NAV distribution rate comes to 12.34%. Certainly, this is very attractive. Unfortunately, that doesn’t seem to be sustainable in the current environment. Over the longer term, the fund really took a hit after the GFC too. While RNP went from monthly to quarterly, to help build up assets again – NRO stayed monthly. This likely hindered the fund’s ability to recover. Of course, investors with a greater focus on current income can probably look past this.

The last report is their Semi-Annual Report, for the period ending April 30th, 2020. That doesn’t give us a significant amount of insight into how the lockdowns and March stock market collapse played a role in this fund. That being said, we see the fund had reduced net investment income. Last year, for the same period, they reported $6,035,340 of NII. This represents a 41% drop from last year’s NII.

The portfolio’s turnover rate remained very low as well at 3%. Of course, this goes back to the fund having to reduce its leverage significantly. This only is reflective of a couple of months of reduced leverage though for the report. It is likely when they report again, it will be even lower.

Since the fund does still hold equity positions as well, they can make some of this up through capital appreciation. Even that will be a struggle for NRO. They reported over $40.5 million in unrealized appreciation on the portfolio. Since then, assets have rebounded quite a bit due to the broader market recovery from the lows. Assets went from around $211 million at that time to the $224 million shown now. Of course, that means there is still a significant shortfall in where the returns will come from to continue funding the distribution. Thus, we will continue to see destructive ROC used in funding their payout. 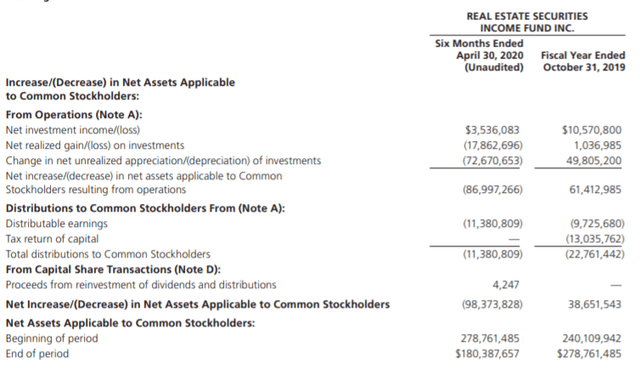 Since the fund was trading at premium levels, they were able to take advantage of raising assets from their DRIP. This wasn’t a significant amount as the premium was quite brief.

The tax character can be seen below, showing just how much ROC is being used. That being said, last year’s ROC utilization wouldn’t technically be classified as destructive due to the fund increasing its NAV from the beginning to the end of the year.

Besides being able to take advantage of this fund’s premium/discount pricing, this fund also shows some solid top 10-holdings. Unfortunately, this hasn’t translated into greater returns for shareholders – or a sustainable distribution. 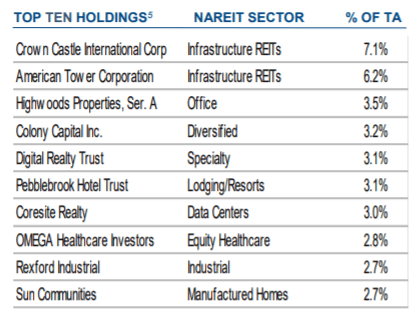 That being said, they also show some companies that are certainly struggling through 2020. Which, isn’t necessarily a surprise as something would have to explain the underperformance over the years from a similar fund. One thing that might be of more interest to shareholders of NRO is that they are quite diversified across a broad range of industries within the REIT space. Holding the areas that are struggling currently could also be a sign that they can outperform going forward. 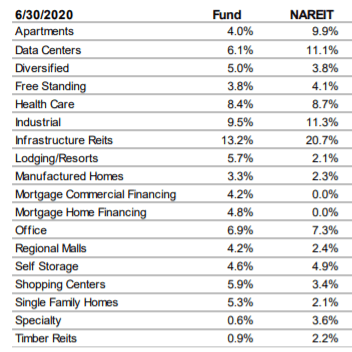 Almost all shopping centers, regional malls, lodging/resorts, mortgage commercial and office industries have struggled and continue to do so. Those sectors represent 26.9% of their portfolio. This was higher too at one point as these areas become depressed, their allocations became less and less.

Looking at a few of their top ten, we do see Crown Castle (NYSE:CCI) and American Tower Corporation (AMT). These remain strong REITs (and getting stronger) as they have been able to operate unfettered throughout lockdowns. Of course, they also have the 5G catalyst to continue to help them grow over the coming years. This has resulted in CCI and AMT still being able to keep revenue rather steady year over year.

Highwoods Properties (HIW) has done rather well through this pandemic too, according to their latest earnings release published in July. That is despite their involvement in the office REIT space. Additionally, the share price hasn’t reflected this relative strength. 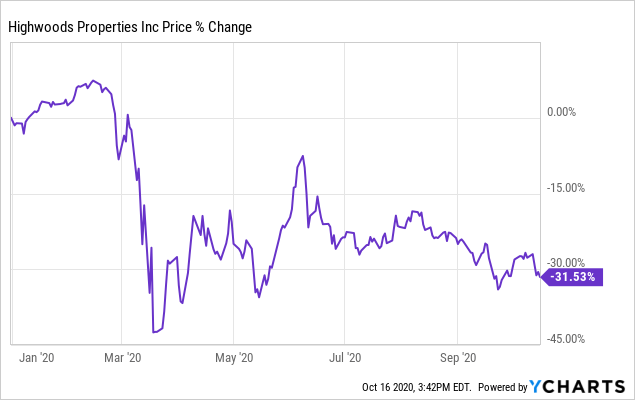 NRO is holding HIW’s preferred position though, a series A cumulative redeemable preferred share. This can result in more stability than HIW’s common stock. 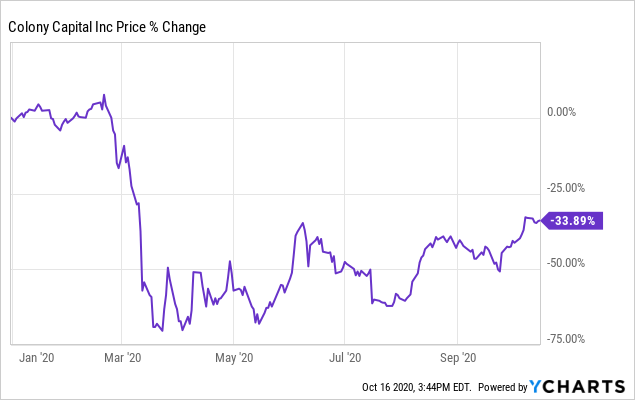 Colony Capital, Inc. (CLNY) has likewise struggled with its share price this year. This time, earnings weren’t so great the last time they reported. CLNY is a “diversified” REIT, in that they operate real estate across all industries. In this case, again, the holdings are preferred. However, unlike many other areas of the market where preferreds have bounced back, (CLNY.PI) is struggling to get back to par.

NRO can be a great investment if one is a bit more active in their approach to investing in CEFs. For other, longer-term holders, I believe that RNP represents a better place to park cash; that is being more appropriate for investors that want to “buy and hold.” If you can get in at discounts we saw in March, of 15%+, that could likewise be a fantastic time to get in.

That doesn’t mean NRO can’t outperform going forward, only that the track record is subpar at this juncture. Due to deleveraging the fund too, it is once again going to struggle to maintain its current distribution rate. As of their last Fact Sheet at the end of 6/30/2020, they hadn’t redeployed leverage back into the fund either. Now, that does mean they are significantly underleveraged compared to a fund like RNP. Meaning they could take advantage of another market selloff. Unfortunately, that hasn’t happened yet and their distribution remains unsustainable at these levels. This all ultimately leads me to believe that NRO would tend to favor those investors that are more active and consider themselves riskier investors.

Disclosure: I am/we are long RNP. I wrote this article myself, and it expresses my own opinions. I am not receiving compensation for it (other than from Seeking Alpha). I have no business relationship with any company whose stock is mentioned in this article.

Additional disclosure: This article was originally published to members of the CEF/ETF Income Laboratory on October 16th, 2020.