NRG Energy (NYSE:NRG) is a company that first attracted my attention through its ownership of Green Mountain Energy, one of the largest producers of wind power in the United States, which I have been using to power my home for many years. The company is much more than just this though, as NRG Energy produces the power that it sells to its customers via many different sources, both renewable and otherwise. As is the case with many utilities too, it should be reasonably well-positioned to ride out the current coronavirus pandemic and any resulting recession. Despite this, though, the market has not been particularly friendly to the stock and has punished it along with everything else, which may create an opportunity for investors.

NRG is one of the largest electrical utilities in the United States, serving 3.7 million customers in Texas, Connecticut, Delaware, Illinois, Maryland, Massachusetts, New Jersey, New York, Pennsylvania, Ohio, and Washington, D.C. This current customer count is the largest that the company has ever had. NRG has steadily grown its retail base over the years, as we can see here: 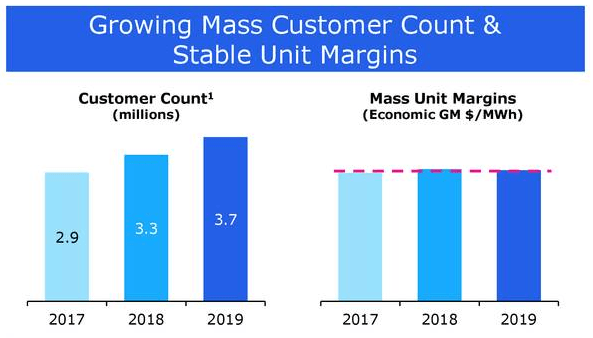 As might be expected, this growing customer base has resulted in the company’s customers consuming more electricity in aggregate than they did in previous periods. This has generally translated into cash flow growth over time. We can see this here: 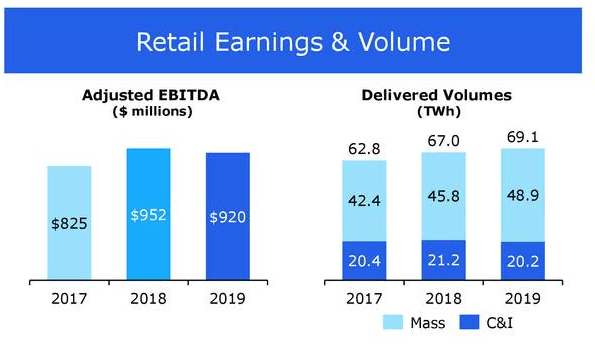 It would be reasonable to assume that the company’s retail customers may be consuming even more electricity than normal in the current environment since we have all essentially been ordered to remain at home, so things like televisions would see more use than usual. Businesses will likely be consuming less energy than usual though, so this will certainly offset that potential gain. This does illustrate how utilities are somewhat better equipped to weather through the current economic conditions than many other companies. When times are tight, people will generally prioritize paying their utility bills over more discretionary spending. This is doubly true when they are stuck at home as nobody wants to have their service cut off in such a situation.

As may be expected, NRG Energy is a leader in renewable energy generation. In 2010, NRG Energy purchased Green Mountain Energy, which is one of the largest producers of wind and solar power in the United States. This entity offers their various renewable-sourced products, which include things like chargers for electric cars and carbon offsets, in markets where electrical utilities have been deregulated. The company is also working to reduce its carbon emissions and has even set a goal of having net zero carbon emissions by 2050: 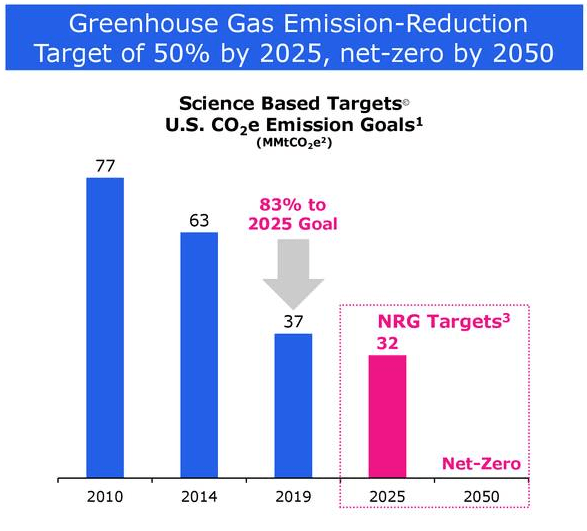 In addition to increasing the proportion of renewables in its portfolio, the company is working to accomplish this goal by reducing the percentage of its electricity that comes from coal. In 2014, 29% of NRG Energy’s revenue came from electricity that was generated by coal. The company managed to reduce this to 13% in 2019: 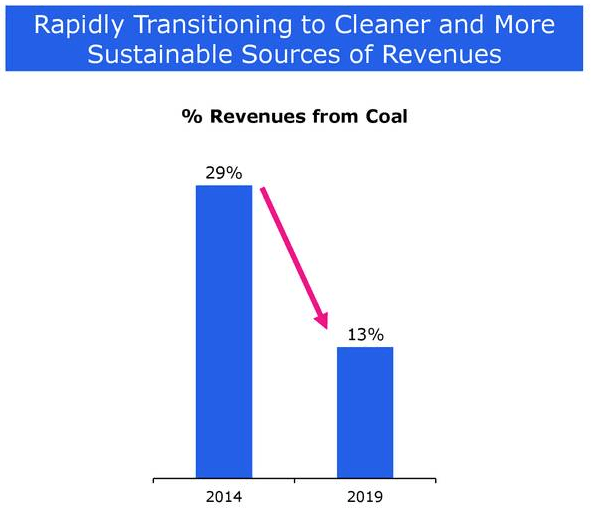 In the past few years, we have seen a surge in popularity of ESG investing, especially among young investors. This is a form of investing that seeks positive returns by investing in companies that have a positive impact on society. While it is debatable exactly what is considered a positive impact, it would generally include those companies working to move the world towards renewables and away from fossil fuels. Obviously, NRG Energy would fit into this category. As the funds in this space have been receiving large inflows of capital, there has been buying pressure on companies that are appealing to ESG investors that exceeds that of companies that are not. This could cause NRG Energy to outperform the broader utility sector going forward.

NRG Energy appears poised to see rising demand for its generated electricity over the next several years. As we can see here, over the 2020 to 2024 period, the company expects electricity consumption to increase at a 3.2% compound annual growth rate: 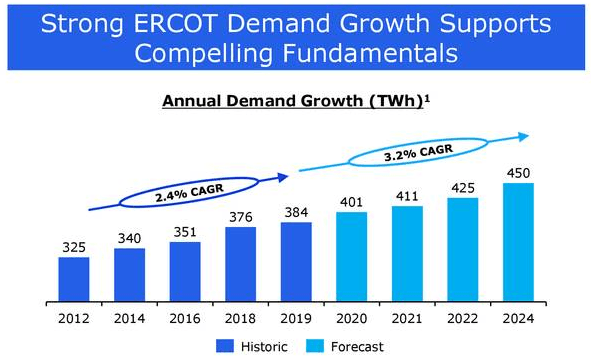 READ ALSO  Canadian Car Sales "Recover", Only Crashing 44% In May, After April's 75% Plunge 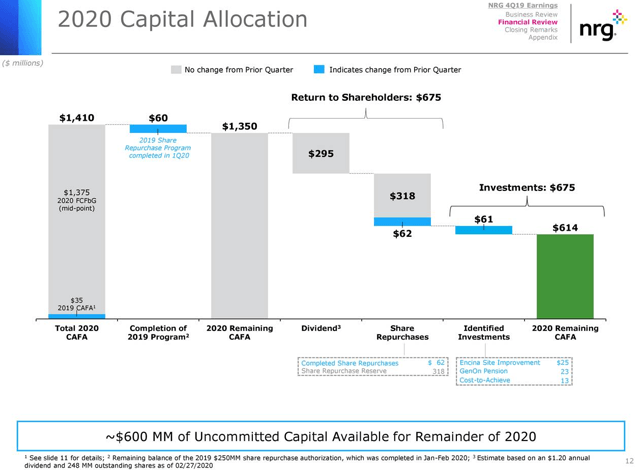 It is admittedly rather disappointing that the company has not yet decided where the majority of this money will be allocated. As we can see above, fully $614 million of the total $675 million has not been committed to any capital project. While we can assume that management will assign this money to various projects as they are identified, it would still be nice to have more visibility here.

As some investors that have followed this company know, NRG Energy was forced to restructure in early 2018 following a period of extreme distress. What happened is that, when the price of natural gas fell significantly in 2014 as a result of rising production, those companies operating natural gas-fired power plants were able to drop their prices substantially. Those operators with other types of plants had to cut their prices to compete, which caused severe pressure on margins and profitability. NRG Energy was not alone in having this problem, though. For example, FirstEnergy (NYSE:FE) also had to restructure because of this.

The company is nowhere near as financially strong as I would like to see despite the restructuring. We can see this by looking at the debt-to-equity ratio, which tells us how the company finances itself. As of December 31, 2019, NRG Energy had $88 million in current debt and $5.803 billion in long-term debt for a total of $5.891 billion. This compares to a scant $1.658 billion in shareholders’ equity, which gives the company a debt-to-equity ratio of 3.55. This is significantly worse than what DTE Energy (NYSE:DTE) has (see here) and that company has also been investing heavily in renewables and reducing carbon emissions.

As is the case with most utilities, NRG Energy pays out a dividend to its investors. The recent decline in the stock price has increased the yield on it, and it is now much more appealing than it has been in the past. The company currently pays out a dividend of $1.20 per share annually, which gives it a 4.25% yield at the current price. This is substantially better than the 3.53% paid out by the utilities sector (NYSEARCA:XLU) as a whole. This dividend is also much higher than what the company has paid out in the past. Here is NRG Energy’s dividend history over the past five years:

As we can see, the company was smartly limiting the dividends that it paid out during the time that it was facing the financial stress that ultimately forced it to restructure. Now that those problems appear to be resolved, the company has resumed its commitment to its owners, which is nice to see.

In conclusion, NRG Energy appears to have been unfairly beaten down by the market and may thus offer an attractive opportunity for an investor willing to stomach the current volatility in the market. The company may also prove appealing to the ESG crowd, given its focus on reducing carbon emissions and expanding the presence of renewable energy in the United States. The company’s financial structure is concerning, given the amount of debt relative to equity that the company is using to finance its operations. Personally, I would take DTE Energy, which I discussed in a recent article (linked above), over NRG Energy, given the company’s stronger financial structure and similar appeal to the ESG crowd.