Now They Are Calling For a “Global” Minimum Wage 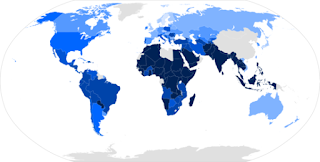 CounterPunch has just published an essay calling for a global minimum wage.

Yes, a global minimum wage! “Not uniform across countries, but based on a common formula for a living wage.”

In the essay, there is simply a total lack of basic understanding of supply and demand economics and how wages are set. The essay seems to be based on an analytical perspective of nothing more than kumbaya and “We are the world” chants playing in the background, as if higher minimum wages could be set by magic declaration in honor of organized socialist-leaning labor organizations.

I am not making this up, from the piece:

The International Labour Organization (ILO) is celebrating its 100th anniversary this June. In the wake of a devastating world war, its mission was transformational: to realize social justice and the rights of workers everywhere.

But now, 100 years later, exploitative working conditions remain the norm, more people than ever live in poverty, and the richest 1 percent are on track to own two-thirds of all global wealth in a decade. While no single policy could solve these problems entirely, one in particular would be a decisive step forward.

At its centenary conference, the ILO should call for a global minimum wage.

Since the 1980s, a “neoliberal” model of globalization has empowered investors and corporations to cross borders at will in search of the most profit-friendly environments. Because capital is mobile while workers are not, nations are forced to compete to attract investment by slashing labor regulations, environmental protections, and wages. If workers in one country win improvements, mobile corporations simply move to another country where wages are lower.

A global minimum wage would set a floor to the downward spiral. Corporations could still leave for other reasons, but they would no longer have the option of moving to a country with less than livable wages.

This would dramatically strengthen the position of labor around the world, allowing workers in individual countries to fight for wage increases with less risk of capital flight. If the global minimum wage formula is tied to median wages, it may even set off a climb to the top, as rising minimums in other countries provide further leverage for workers to push for gains in their own…

Determining how it would actually work – from calculating the actual wage to defining an enforcement mechanism — is crucial. Some have proposed a simple formula based on a percentage of national median wage. Others suggest a more complex measurement that accounts for cost of living and national living standards. Implementation may be modeled on international trade law, with a body like the World Trade Organization acting as a forum for multilateral agreements on targets, and an arbiter of state-state disputes. Such technical questions present challenges, but they are not insurmountable.

Outside of the essay being dressed in shallow long ago destroyed Marxist labor exploitation theory, there is no other attempt to introduce theory of any kind into the article.

The idea that wages can be centrally planned is taken for granted.  But why should it? Basic supply and demand economics teaches us how wages are set and, at the extreme, this becomes pretty obvious.

You just can’t declare that everyone must be paid what LeBron James is being paid. The author of the essay must somehow deep in his mind realize that the earnings of James cannot be the declared the rate that is paid to everyone. That something else beyond declarations is a determining factor in the wage rate.

But minimum wage advocates are sneaky about this point, since the higher you go in the wage demand the more intuitive it becomes to understand that you just can’t declare any wage. That is why they always call for a so-called “living wage.” It sounds noble and humane. But if wages can be set by government declaration, why be so stingy? Why not call for a “luxury yacht level” wage, where everyone is paid enough to buy a yacht and a month off to cruise on it?

They don’t because deep down they understand that supply and demand, the natural force of human action, won’t allow it to happen and the charade is blown if they expose the weakness in their theory to the masses.

People who don’t have formal training in supply and demand economics may fall for the living wage chant but once you raise it to the “luxury yacht level” wage chant, their minds won’t be able to figure out what the problem is in detail but some of the circuits start to kick in that tell them you can’t just declare wages that don’t line up with the reality of supply and demand and costs and benefits.

It is the duty of the economist to get more circuits firing in the brains of the masses when disastrous policy proposals are made in the guise of helping the masses.

And a higher minimum wage is disastrous because it goes against human nature (that is supply and demand). It will do nothing but cause unemployment for those who are the least productive in an economy, who can generate in revenue per hour only less than the minimum wage. In addition, because we will lose the productivity of these people in the economy, it will also result in a decline in the general standard of living. The more people put into a position of being forced out of work, the less productive a society becomes. A call for a global minimum wage is a call for a crash in global productivity. The global masses need to understand this.