NovoCure: A Disrupter In Oncology (NASDAQ:NVCR)

This disruptive medtech player in oncology is up >7x since I started covering it on Seeking Alpha in 2016 (when it was trading at $7.76/share). I wrote the title in my initiation article as ‘NovoCure’s TTFields Therapy Could Become The Standard Adjunct Therapy In Various Solid Tumors’. Over the past 4 years, the company has shown significant pipeline progress in making my title closer to reality.

I took advantage of the recent pullback in the stock off 52-week high to re-enter a long core position. My key interest is the recently announced Merck (NYSE:MRK) deal to develop TTFields with Keytruda as a first line treatment in advanced non-small cell lung cancer. Early preclinical data has shown a synergy between the two therapies, and the combination had statistically significant benefit compared to Keytruda or control alone. I consider the current market cap for NovoCure as significantly undervalued considering the global NSCLC revenue opportunity and am targeting at least a double on the investment within 2-3 year timeframe. Partnership with Zai Lab to commercialize TTFields in Greater China has opened up another large revenue opportunity. Additional indications like GBM, pancreatic cancer, liver cancer and ovarian cancer (in late-stage clinical trials) will further add to the future revenue. I expect the stock to reach $600/share by 2025.

NovoCure (NASDAQ:NVCR) was founded in 2000 and is based in Jersey. Its U.S. operations are based in Portsmouth, NH, and European operations are based in Switzerland and Germany. The company is in the medical technology sector. Its proprietary platform, Tumor Treating Fields, or TTFields, uses electric fields which are fine-tuned to specific frequencies to disrupt the division of solid tumor cells. TTFields disrupt the mitotic spindle, breaking tubulin and cause tumor cell death. In addition, it is also shown to inhibit DNA damage repair, induce autophagy, reduce cell migration and induce immunogenic cell death, thus having a wide efficacy across a broad range of solid tumor types as well as brain metastases.

Optune is a commercially available, FDA-approved version of TTFields for treating newly diagnosed as well a recurrent glioblastoma, GBM, one of the most deadly forms of cancer. Optune is also approved to treat GBM in the EU and Japan and licensed to Zai Lab for Greater China. Optune is used as a portable external device with an electric field generator, transducer arrays, rechargeable batteries and accessories. The company uses a direct-to-home delivery model where a representative delivers the device at a patient’s home after receiving the prescription, trains the patient and the family in using the device and its maintenance, and provides 24/7 support.

In pivotal clinical study, Optune extended the overall survival by five months in newly diagnosed GBM (in combination with temozolomide) (20.9 months vs. 16 months for temozolomide alone). The progression-free survival, PFS, was increased to 6.7 months for the combination compared to 4 months for temozolomide alone. Even better results were shown when Optune was used by patients 90% of the time where median survival was 24.9 months, thus extending the survival by almost 50% from the best medical therapy. Even higher survival was seen (25.2 months) when Optune was used with higher energy levels. Based on these remarkable results, Optune has found a place as a standard of care therapy in newly diagnosed GBM, which affects approximately 10,000 new patients every year in the U.S. and an equal number in the EU.

At an estimated annual incidence of 3 new cases per 100K population, the estimated target market is approximately 27,500 new cases in the U.S., E.U. and Japan. At an estimated annual price of $120,000 per year, this is an estimated $66 billion revenue opportunity in the above territories (each patient use = approx. 2 years). In addition, the target market in China is approximately 42,000 new cases per year. Under its current deal with Zai Lab, NovoCure will receive royalties ranging from 10% to mid-teens on Optune sales. At a conservative 10% royalty rate, this indication is a $10 billion/year revenue opportunity in China for NovoCure. Considering the current market cap of $6.3 billion, just the newly diagnosed GBM indication makes the current market cap look undervalued.

READ ALSO  Agricultural park to be major vegetable base for GBA

Disrupting the standard of care for first line therapy of advanced non-small cell lung cancer, the most common cancer in the U.S.

In July 2020, Merck announced a collaboration with NovoCure to develop a combination of Keytruda (Merck’s blockbuster anti-PD1 immune checkpoint inhibitor) in combination with TTFields as a first line therapy in advanced non-small cell lung cancer, NSCLC. The rationale for this combination is derived from preclinical studies which have shown significant increase in efficacy when this combination is used in this cancer (showing a synergistic action) as compared to Keytruda alone or control arm.

The next step is to conduct a 66-patient Phase 2 trial. The companies are using PD-L1 level as a biomarker, which increases the probability of success. The primary endpoint for the Phase 2 trial is objective response rate or ORR. The secondary endpoints are survival data like OS and PFS. Considering the small size of this trial, I expect the trial to enroll quickly and provide data readout in the second half of 2021. The companies may even apply for accelerated approval if the results are ground-breaking (I am optimistic that this combination will disrupt the treatment paradigm of this most common form of cancer after showing ground breaking results in refractory cancers like GBM, mesothelioma and pancreatic cancer).

Brain metastases are commonly seen in many cancers and resection of isolated brain metastatic lesion or stereotactic brain radiation are used in some cases. METIS is an ongoing Phase 3 pivotal trial for TTFields in brain metastases. The trial will enroll 270 patients with 12 months of followup. The primary endpoint is the time to intracranial progression. The data is expected in 2022. The target markets can be estimated from the incidence of brain metastases in different cancers: melanoma (28%), lung adenocarcinoma (26.8%), small cell lung cancer (23.5%), squamous cell cancer of the lung (15.9%), bronchoalveolar lung cancer (15.5%) and renal cancer (10.8) and then from the SEER database showing annual U.S. incidence of these cancers. At an average 20% incidence of brain metastases across all cancer types and 1 million new cancer cases in the U.S., this could be a $24 billion/year U.S. revenue opportunity.

READ ALSO  How much will a Covid-19 vaccine cost?

A Phase 2 trial (HEPANOVA) is ongoing in liver cancer. This is a proof of concept study enrolling 25 patients. The primary endpoint is radiological response rate. The data is expected in 2021. The target market is 38,000 new cases/year in the U.S., 82,500/year in the E.U. and 35,500 cases/year in Japan or $18 billion/year revenue opportunity.

NovoCure has also started a Phase 2 trial in gastric cancer in China in partnership with Zai Lab. The data is expected in 2021. The annual incidence of this cancer in China is 456,000 new cases/year. At 10% royalty rate, this could be a $54 billion/year revenue opportunity for NovoCure. 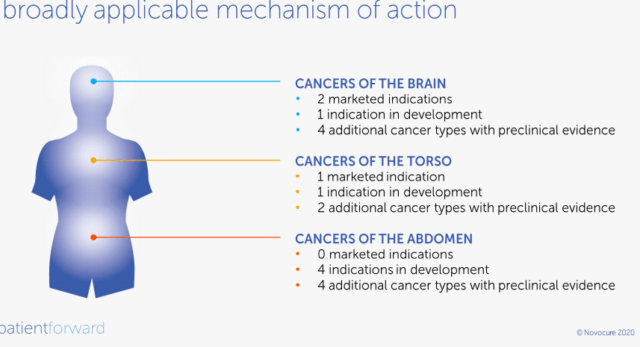 In addition, the company also has promising preclinical data in other cancers like breast cancer, cervical cancer, colorectal cancer, malignant melanoma, renal cancer, etc. which have the potential for further significantly increasing the future global revenue.

Net revenue grew 39% year over year in Q1 2019 to $101.8 million. The company had 3,095 active patients at the end of Q1 this year. Considering the massive target market opportunity detailed above, I believe that this investment story is still in its early innings and as TTFields get approval in NSCLC and other indications like gastric cancer, the revenue will grow exponentially. The gross margin was healthy, 76% in Q1, 2020. The company turned positive in cash flow from operations in Q1.

Cash reserves on the balance sheet were $331 million in Q1 end. Net operating cash use was $26 million in 2019. At the current revenue growth rate, I don’t expect any need for a capital raise or additional financing.

I have provided a gross estimate of the target market sizes and revenue opportunities across various cancer indications in the pipeline discussion above. Given below is a conservative estimate of the fair value estimate for the market cap based on an average price/peak sales ratio of 4 for healthcare medtech, annual price of $120,000, and conservatively, peak market penetration of just 25%, which was reached six years after the launch, and cost of capital of 15%.

While my estimate for the stock price may seem outlandish, I have explained the rationale and my calculations above. NovoCure’s TTFields is a disruptive therapy in cancers. The deal with Merck in advanced NSCLC, the most common cancer in the U.S., shows the desperation of Merck to find new therapies to combine with its flagship cancer molecule Keytruda, which is increasingly becoming a standard of care in various cancers. With the increasing rate of failure in immuno-oncology (after the initial hype 3-4 years back), high cost of other therapies in development like CAR-T, there is a dire need for new therapies in oncology with differentiated mechanisms that are synergistic with other therapies like anti-PD 1 checkpoint inhibitors. TTFields have shown unbelievable results in increasing survival in very hard to treat cancers like GBM and pancreatic cancer which are considered as the graveyard of oncology. With the success shown in these cancers, I have full confidence in my target market assessment of this company’s revenue potential and that TTFields will become a standard first line therapy (in combination with other therapies) just like chemotherapy is now the first line standard of care in most cancers (with need for newer safer therapies to avoid the toxic side effects associated with chemotherapy).

Under the leadership of Bob Doyle, the Executive Chairman of NovoCure (he served as the Chairman of Medical Devices Research and Development at Johnson & Johnson and was a member of JNJ’s Medical Devices and Diagnostics Group Operating Committee), I expect NovoCure to continue to grow leaps and bounds achieving success in the above oncology areas, and increasingly gaining market share after the product launch through effective sales and marketing. The price target is also by no means the final price target. As the company makes progress in the pipeline, e.g. by showing successful results, the probability of reaching the market will increase, the denominator used in discounting will decrease as the time to peak sales decreases, and the fair value per share will also increase significantly beyond that mentioned above. The gross peak revenue opportunity can be estimated from the table above, and investors can estimate an idea for the market cap by 2030 (on 100% market share) by multiplying it by 4 (at an average price/peak sale ratio of 4 in this sector).

(NovoCure, pipeline and catalysts for data releases, from its website) 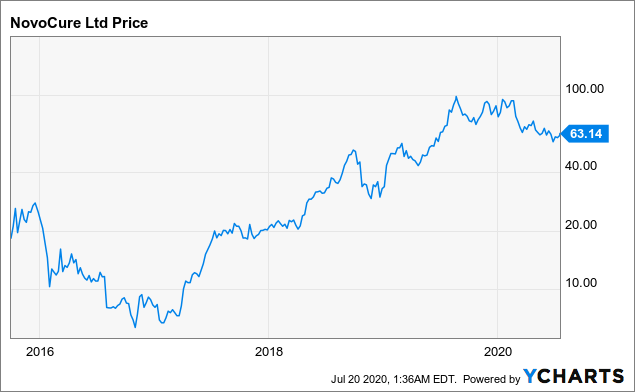 Risks in the investment

Investing in a development stage or early commercial stage biotech/medtech company has risks, and a small allocation (max. 5% of the portfolio) is suggested. The company may not be able to reach the estimated market share in above cancer indications. The results of the NSLC Phase 2 trial with Merck may disappoint, and the deal may fall through. The deal with Zai Lab in China may not execute successfully if the GBM sales disappoint and the gastric cancer trial results are not satisfactory.

This article represents my own opinion and estimates and does not represent any investment advice or solicitation or advice to buy/sell any security. Investors are suggested to not follow the investment idea blindly and conduct their own thorough research/due diligence and/or consult their investment advisor before making any investment decision based on this report. Investing in biotech/medtech companies may not be suitable for all investors and it is possible to lose the entire capital invested. Investors are suggested to diversify their portfolio holdings across at least 25-30 names in this sector.

Disclosure: I am/we are long NVCR. I wrote this article myself, and it expresses my own opinions. I am not receiving compensation for it (other than from Seeking Alpha). I have no business relationship with any company whose stock is mentioned in this article.