Nova Scotia is the island on the east coast of Canada, just to the east of Maine and New Brunswick. It isn’t most well-known for its gold mining industry, however, there is some gold production and projects in the region. Currently, there is one producing gold mine, with several in the permitting process.

Gold mining began in Nova Scotia in 1861, and since then, the province has produced over one million ounces of gold. As of gold production in 2018, it ranked eighth among Canadian provinces and territories.

Most Nova Scotia gold mining centers around the Meguma formation, which is found primarily along the southern coast in the north-central part of the island. 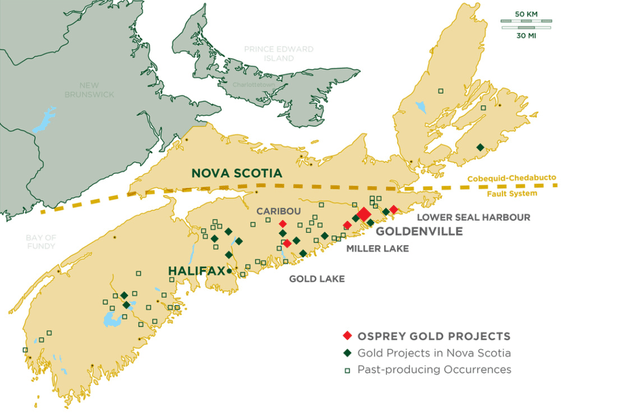 Below is a list of companies that either have production or exploration projects in Nova Scotia.

Public Companies with Gold Mines and Projects in Nova Scotia

There was only one producing gold mine in Nova Scotia in 2019.

*Reserves and resources listed in millions

Full List of Gold Mines and Projects in Nova Scotia

The project currently has a resource estimate of measured, indicated, and inferred of 1.38 million ounces as of August 2019.

Since 2017, the company has drilled 28,000 meters of test drilling. In 2020, it plans to drill an additional 5,500 meters with the primary goal of adding mineral resources to the feasibility study. A third-party engineering firm is currently in the process of completing a feasibility study, and they expect to complete it in Q4 2020.

Anaconda Mining has been active in promoting the project within the community and with the indigenous people, as is demonstrated by the flyer it created below. 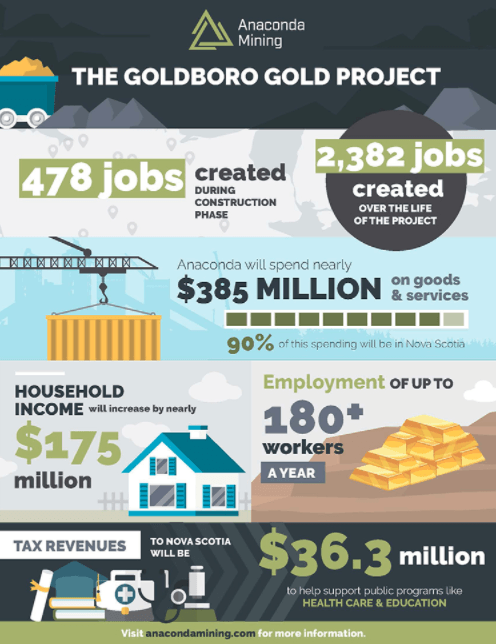 The company currently trades with a market cap of $72 million.

Aurelius Minerals has three early exploration-stage projects in Nova Scotia. These include Aureus, Forest Hill, and the Tangier Property.

Its flagship property is the Aureus property. The company recently acquired the property, and Eric Sprott, via Sprott Resource Lending, was involved in helping Aurelius Minerals close the transaction. The company states that it believes the Aureus deposit to be similar geologically to Kirkland Lake Gold’s (KL) Fosterville mine.

The following image shows Aurelius’s plans for the Aureus deposit over the next year or so. The deposit is split into two categories: Aureus East and Aureus West. 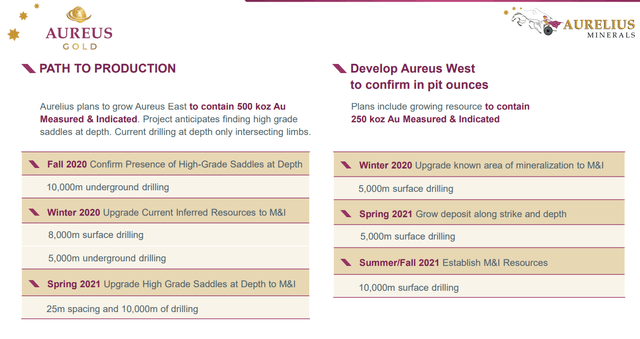 The Aureus East property has indicated and inferred resources of 427,000 ounces. The property also has a small existing mineral processing facility on it that can process 300 tpd. The company has also discovered exceptional drill results that are not factored into the resource estimate mentioned above. Here’s a look at some of those results.

Aurelius Minerals currently trades with a market cap of $12 million.

MegumaGold Corp., named after the Meguma geological formation in Nova Scotia, owns multiple projects. All of Meguma’s projects are in the early exploration stage. To give context to MegumaGold, it’s best to talk about its projects in geographical relation to other companies’ projects.

The company also has a land package just to the north surrounding the Osprey and St Barbara Caribou region. It seems that this is MegumaGold’s strategy: to acquire meaningful land packages near other companies’ prospects. 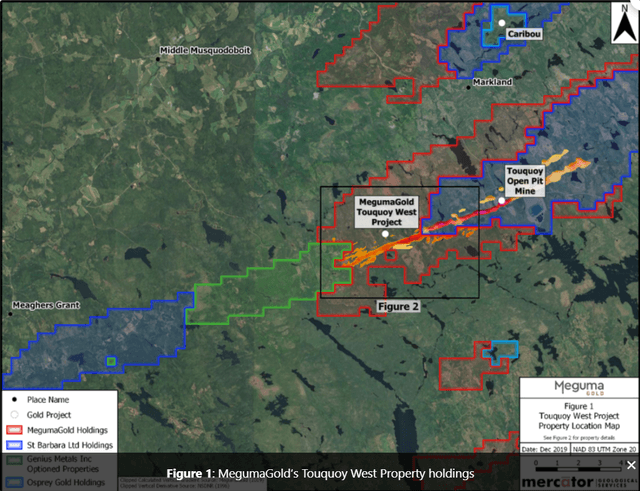 Here’s a list of some of MegumaGold’s other projects which you may recognize by the name of other companies’ projects.

MegumaGold Corp. currently trades with a market cap of $16 million.

Northern Shield Resources is the owner on the Shot Rock property and the Five Islands property.

Shot Rock is located on the northern coast of Nova Scotia, not far from New Glasgow. Northern Shield Resources began exploring the property in June 2018 after signing an option agreement for the property in 2017. It currently owns a 50 percent interest and can acquire up to an 80 percent interest in the property. If the project reached production, the company will be required to pay a 1 percent NSR royalty stream. Based on a maiden drill program on the property, Northern Shield Resources has seen grades up to 22.1 grams per ton over .4 meters. The company is still in the early exploration stages. 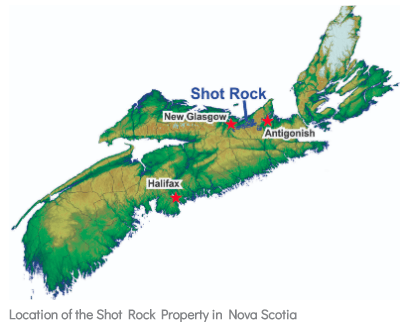 READ ALSO  China pledges to be ‘carbon-neutral’ by 2060

The company’s Five Islands property is very early in the exploration phase. Therefore, there is limited information available.

Northern Shield Resources currently trades with a market cap of about $30 million. It has several other prospects in Newfoundland and Quebec.

Osprey Gold Development is the owner of several small projects, including the Goldenville and the Caribou project. Each of Osprey’s gold projects is in the early exploration phase.

Here are some maps of where Osprey’s projects are located. 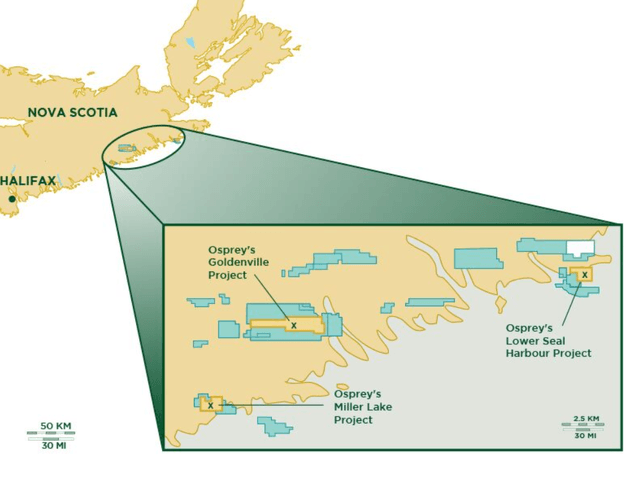 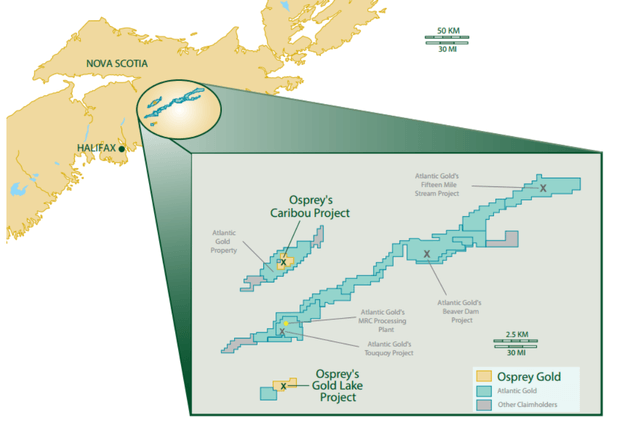 In 2020, the company plans to continue an exploration program with the intention of adding resources to their projects.

Osprey Gold Development currently trades with a market cap of about $5 million.

St Barbara is a gold company with operations in Western Australia, Papua New Guinea and Nova Scotia. It acquired Atlantic Gold in July 2019. St Barbara’s primary mine is the Touquoy, located 60 km northeast of Halifax.

The company plans to expand to three more pits with the nearby Beaver Dam, Fifteen Mile Stream and Cochrane Hill. With these pits, there will be an estimated mine life of 12 years.

The Nova Scotia operations have proven and probable of 1.88 million ounces. They also have 2.37 million ounces of measured, indicated and inferred gold.

St Barbara is currently testing the feasibility of the Beaver Dam, Cochrane Hill and Fifteen Mile Stream projects. As we near 2021, the company plans to progress the environmental impact statements and optimize the order of these projects. These projects are in close proximity to the Touquoy mine.

The map below shows the location of each of St Barbara’s projects. Most of its notable projects are near the Moose River corridor, but the company is quietly amassing multiple land packages in the southern part of Nova Scotia as well. 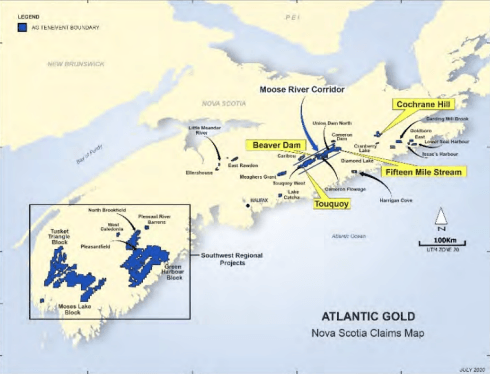 St Barbara currently trades with a market cap of $1.72 billion.

Nova Scotia is a Canadian province on the eastern coast of Canada. It is recognized that the east coast of both the United States and Canada is not well-known for producing gold; however, Nova Scotia has plenty of gold activity in the region. There isn’t as much activity when compared to a place like Quebec or Ontario, but relative to the size of Nova Scotia, it has a fair amount of gold exploration taking place.

There were two companies that stood out. First, the only one with production on the island is St Barbara, which recently acquired Atlantic Gold. St Barbara is the only company of a substantial size that is exploring the area. Based on the land packages that it has built, the company believes Nova Scotia has more gold than just what it is producing at its Touquoy mine. In addition, if any of these smaller companies look attractive to St Barbara, I’d expect it will snatch them up in time, essentially maintaining an extremely competitive position in the area. It’s clear that some of the smaller companies like MegumaGold Corp. have made this their strategy to build land positions around St Barbara. St Barbara also has production located in Papua New Guinea and Western Australia, where it has well-run, profitable gold mines.

The second company that caught my eye was Aurelius Minerals. This is a highly speculative recommendation, as the company hardly has any resource estimates, and potential production is many years in the future. What caught my eye with Aurelius is the fact that it is more targeted than the other companies. Other companies seem to try to build land positions around existing land positions of larger companies like St Barbara, where Aurelius goes after more original ideas. In addition, Aurelius has exploration property surrounding an existing 300 tpd mine, which is a strategic advantage.

Furthermore, Eric Sprott and his companies are involved with Aurelius. If Aurelius ever develops substantial reserves and resources or has favorable drill results, you can bet that Mr. Sprott will begin cheering this one on. With Aurelius trading at a market cap of $12 million, I believe there will be value created for the patient investor. But beware, this one is in the very early stages, so the emphasis is on the word patient.

Lastly, I would just remind everyone to look out for Anaconda Mining’s feasibility study coming out before the end of 2020 for some additional insight into its Goldboro project. It is worth keeping an eye on.

This concludes this write-up on Nova Scotia gold mines and projects. If I’ve left any notable projects off of the list, please let me know about them in the comments section.