Norwegian owners of cabins in Sweden threaten to sue their government

Home Financial news Norwegian owners of cabins in Sweden threaten to sue their government
2020-08-292020-08-29By finanz.dk

Thousands of Norwegians have been cut off by the coronavirus pandemic from their holiday homes in Sweden and a summer of swimming in the sea or lakes and eating crayfish.

But now they are fighting back, fed up with being derided as selfish and potential carriers of the virus. A group of holiday homeowners is threatening to sue Norway’s government.

They argue that Oslo is breaking EU rules on free movement by hindering them from using their cabins, in some cases only kilometres over the border in Sweden where the death rate per capita from Covid-19 has been more than 10 times higher than in Norway.

“People say: ‘why can’t you stay at home and keep the country clean?’” said Lothar Fritsch, a university professor in both Oslo and the Swedish city of Karlstad. “In Oslo in the parking garage where I live, everybody knows I also work in Sweden and they keep an extra distance. One person even pulled their T-shirt over their nose when they saw me.”

Prof Fritsch’s commuting between the two countries has cost him 48 days of quarantine in Norway.

In the beginning it made sense to immobilise populations. But after half a year, you would expect governments to come up with something else

He is part of a Facebook group, “For us with holiday homes in Sweden”, that is behind the complaint, asking for dialogue with Norway’s government but saying they might sue if necessary.

Lina Smorr, a lawyer who drafted a letter to Norway’s health department on behalf of the holiday homeowners and who herself owns a property in Sweden, said that many families had seen their summer holidays ruined, and were left with feelings of “anger [and] sadness”.

The Norwegian complaint is one of the first aimed at the closing-down of what are meant to be Europe’s open borders. The Nordic region has had a passport union since 1952 that acted as a precursor to the Europe-wide Schengen area that has been tested first by the 2015 migration crisis and now by the pandemic.

Norway has one of the toughest quarantine regimes on the continent, and travellers from any of the countries it grades “red” need to quarantine themselves for 10 days. Most of Sweden is red at present, with only a few regions being graded green — and thus free from the quarantine requirement — for a few weeks in the summer.

There is one exception to the restrictions: holiday homeowners are allowed to visit their properties in Sweden for a day to conduct essential maintenance, but only if they do not stop elsewhere in the country or stay overnight.

But with infection rates having risen in Norway recently and fallen in Sweden, some areas of the country — particularly the capital, Oslo — have more coronavirus cases per capita than across the border. Ms Smorr argued that the blanket quarantine requirement on property owners in Sweden was “disproportionate and lacks science-based reasoning”. Many cabins in Sweden were so close to the border that owners could do all their shopping in Norway and avoid Swedish towns. 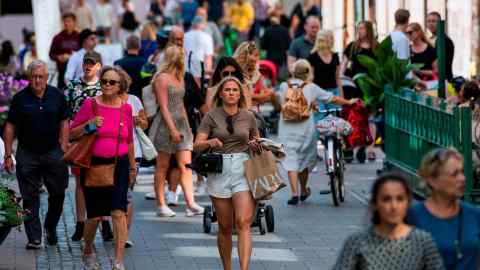 Prof Fritsch, who specialises in computer security and is originally from Germany, said people in Norway who owned Swedish property felt they were being “sacrificed”, while a ban on Norwegians travelling to mountain cabins domestically had been lifted in April. He added: “In the beginning of the pandemic it made sense to immobilise populations. But then after half a year, you would expect governments to come up with something else.”

The plight of holiday homeowners has been overshadowed in Norway by a debate on the day trippers who flock to Sweden to buy cheaper alcohol, meat and sweets but who have been unable to do so in recent months, causing a plunge in revenues of more than 90 per cent in some border supermarkets.

Anne Grethe Erlandsen, state secretary in Norway’s health department, confirmed it had received the complaint but declined to comment further. She added that there was no ban on people visiting their cabins in Sweden but there was a quarantine requirement. The government advises all Norwegians against non-essential travel to any foreign country.