A men-only club in one of the world’s most egalitarian countries was always an argument waiting to happen.

So it has proved in Norway where Norske Selskab, a gentleman’s club that claims to be the fifth-oldest in the world, has provoked controversy in recent months over its continued refusal to consider female membership.

In a country where the prime minister, chief justice, and chief executive of the largest bank are all women, Norske Selskab — which calls itself Norway Club in English — may seem like an anachronism. But some female leaders say a club where a male business elite meet underscores how gender equality has reached nearly every part of Norwegian society apart from company management.

“This debate is not an isolated discussion about Norske Selskab. This debate and the organisation have become a reflection of the challenges women face in Norwegian business,” said Isabelle Ringnes, a 30-year-old campaigner for gender equality, whose father Christian happens to be a member of Norske Selskab. “Attitudes of unconscious bias and gender stereotypes are deeply ingrained in society, and we still have a way to go in battling them.”

A quota law more than a decade ago brought more equality into the Norwegian boardroom with its provision that 40 per cent of directors in public limited companies should be female. The country’s public sector also has a majority of female bosses. But the proportion of female top managers in the private sector is among the lowest in Europe: out of 213 public limited companies in Norway, 16 have women as chief executives, less than 8 per cent of the total.

Norske Selskab was founded in 1772 and had female members during its first four decades. Its membership of 1,100 is drawn not just from men in the business world but also cultural leaders, the armed forces and civil service. Members include some of Norway’s richest men such as the oil and fish billionaire Kjell Inge Rokke, owner of the Nordics’ largest consumer goods group Stein Erik Hagen, and property magnate Christian Ringnes.

Now it has become a focus of criticism over its determination to retain an all-male membership rule.

Just before Christmas, Norwegian media reported that the board of Norske Selskab had looked at the idea of sounding out members on whether women should be admitted. The proposal was quickly shot down. After Mr Ringnes argued on TV in January that the club risked becoming irrelevant by refusing to open up to women, another member, Leopold Lovenskiold, urged him to be thrown out. At Norske Selskab’s annual meeting last month, female membership was not on the agenda and attempts to discuss it were dismissed.

Ms Ringnes said it would not matter if Norske Selskab were a clay pigeon shooting club. “But this is a club where all of the members represent important roles in the business world and whom, in closed forums, have formal and informal conversations that in the long run, directly and indirectly, contribute to valuable networks and important decisions,” she said.

Women are allowed into Norske Selskab as guests on a limited number of “ladies’ days”.

Abid Raja, Norway’s culture and equality minister, has called for the club to open up its membership. “It is an incredibly old-fashioned model they have. It is not very wise to exclude women, and a bit backwards too,” he told state broadcaster NRK.

Such debates extend beyond Norway — last week Emily Bendell, the founder of lingerie brand Bluebella, threatened legal action against the Garrick Club in London. She said it treated women as “second-class citizens” by allowing them only to enter as guests of men and not to pay for themselves. 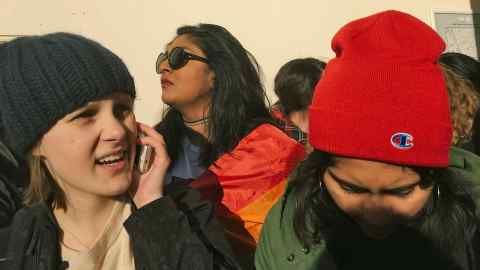 Both Norske Selskab and Morten Thorvaldsen, head of the club’s board and chief executive of Thon Hotels, did not reply to emails asking for comment. Mr Lovenskiold also declined to comment. Mr Thorvaldsen told local media earlier this week: “This is a private club and an overwhelming majority in the last members’ survey said they did not want to change the club’s form.”

One member of Norske Selskab, though in favour of admitting women, said that female admission and their broader under-representation in Norwegian executive suites were different matters. He argued many of the members were “old money” or owned their own businesses, while the average age was about 75.

“It’s not corporate Norway meeting,” he added, stressing the debate was a “hoo-ha”. A former member argued that women had all-female networks “so why can’t we have an all-men’s club?” Kristin Clemet, a former female centre-right minister, also questioned why the sharp debate on Norske Selskab while women’s-only networks were accepted.

Ulf Dahl, a 96-year-old lawyer and member since 1961, wrote in financial daily Dagens Naeringsliv that he did not miss “the feminine element” at the club but lamented that the growing debate on female membership meant Norske Selskab was changing and lacking the “intimacy” it used to have.

An irony of the debate may be that if the club opens up women, many may have been put off joining. Ms Ringnes said: “Having displayed some of the club’s values and attitudes towards women, I would say it would be a miracle if there any women who would want a membership should they be granted access.”