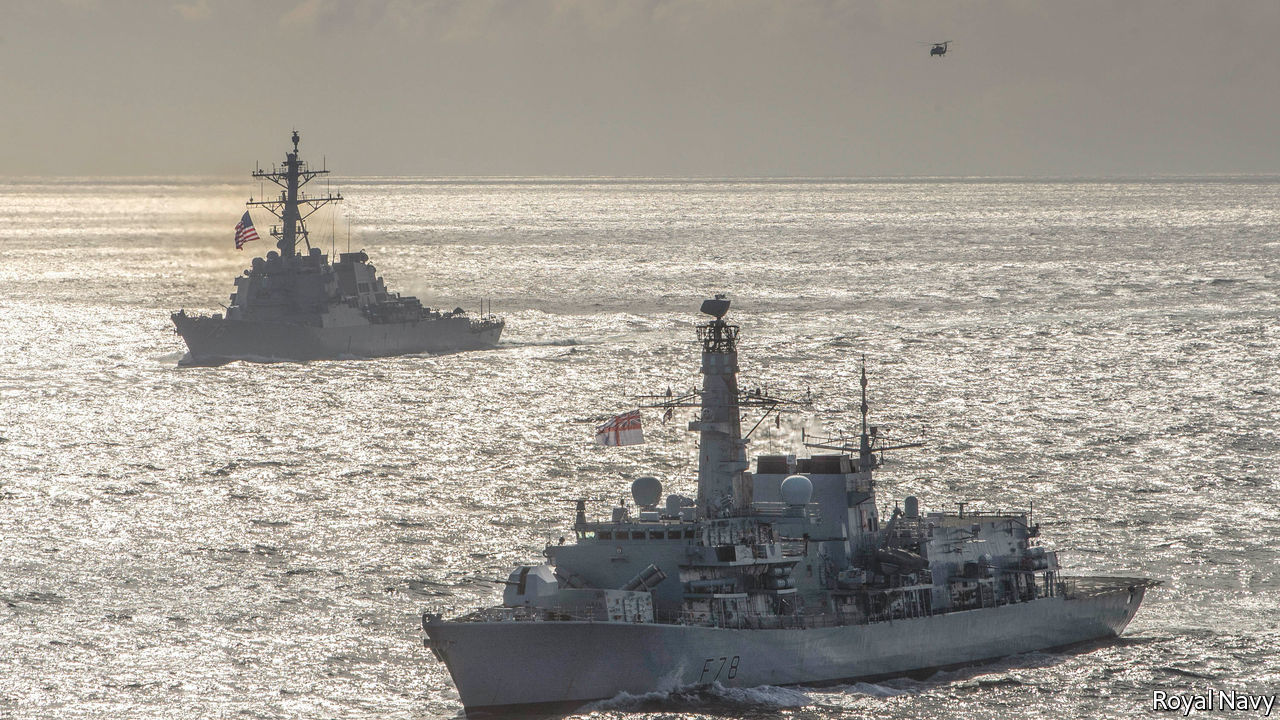 THE BARENTS SEA is not a hospitable place for visitors. “Frequent snow storms … blotted out the land for hours on end,” wrote an unlucky British submariner sent there to snoop around during the cold war. “We faced the beastliness of spray which turned to ice even before it struck our faces.” It is no surprise, then, that American warships have kept away from the sea since the mid-1980s—until they returned last week.

Their presence is part of a steady northward creep by NATO naval forces. In 2018 the alliance, joined by Sweden and Finland, held Trident Juncture, its largest exercise since the end of the cold war, in Norway. That involved the first deployment of an American aircraft carrier in the Arctic Circle for three decades. Western warships have been frequent visitors since. On May 1st a “surface action group” of two American destroyers, a nuclear submarine, support ship and long-range maritime patrol aircraft, plus a British frigate, practised their sub-hunting skills in the Norwegian Sea.

Such drills are not unusual. But on May 4th some of those ships broke off and sailed further north into the Barents Sea, along with a third destroyer. Although American and British submarines routinely skulk around the area, to spy on Russian facilities and exercises covertly, surface ships have not done so in a generation. On May 7th Russia’s navy greeted the unwelcome visitors by announcing that it too would be conducting exercises in the Barents Sea—live-fire ones, in fact. On May 8th, having celebrated VE Day in Russia’s backyard and completed several days of “high-end, sustained operations”, the NATO vessels departed.

It is a significant move. The deployment of destroyers which carry missile-defence systems and land-attack cruise missiles is especially assertive. After all, the area is the heart of Russian naval power, including the country’s submarine-based nuclear weapons. Russia’s Northern Fleet is based at Severomorsk on the Kola peninsula, to the east of Norway’s uppermost fringes.

Western navies are eager to show that covid-19 has not blunted their swords, at a time when America and France have each lost an aircraft-carrier to the virus. But their interest in the high north predates the pandemic. One purpose of the foray into the Barents Sea was “to assert freedom of navigation”, said America’s navy. Russia has been imposing rules on ships that wish to transit the Northern Sea Route (NSR), an Arctic passage between the Atlantic and Pacific that is becoming increasingly navigable as global warming melts ice-sheets (see map). America scoffs at these demands, insisting that foreign warships have the right to pass innocently through territorial waters under the law of the sea. Although last week’s exercise did not enter the NSR, it may hint at a willingness to do so in the future.

On top of that, the Arctic is a growing factor in NATO defence policy. Russia has beefed up its Northern Fleet in recent years, adding air-defence systems, missile depots and new ships. Russian submarines remain “outnumbered” by American ones, says Michael Kofman of the Centre for Naval Analyses. But they are increasingly busy. Russian submarine activity is at its highest level since the cold war, according to NATO commanders. Ten subs reportedly surged into the north Atlantic in October to test whether they could elude detection.

“The Russian Navy is much more active today than it may have been in the 1990s and 2000s, but that return was inevitable given the dearth of activity and funding at that time,” says Mr Kofman. Nevertheless the build-up troubles NATO planners. Russia’s new subs are quiet and well-armed. As a result, the alliance’s “acoustic edge”—its ability to detect subs at longer ranges than Russia—“has narrowed dramatically”, notes a recent paper by Nick Childs of the International institute for Strategic Studies (IISS), a think-tank in London.

Russia primarily uses its attack submarines to defend a “bastion”, the area in the Barents Sea and Sea of Okhotsk where its own nuclear-armed ballistic-missile submarines patrol. But some NATO admirals worry that, in a conflict, some could pose a wider threat to the alliance. A separate Russian naval force known as the Main Directorate of Deep-Sea Research (GUGI, in its Russian acronym) might also target the thicket of cables that cross the Atlantic.

The challenge is a familiar one. For much of the cold war, NATO allies sought to bottle up the Soviet fleet in the Arctic by establishing a picket across the so-called GIUK gap, a transit route between Greenland, Iceland and Britain that was strung with undersea listening posts. “We will pass all of the imperialist sonar nets, and we will not be detected!” declares Captain Ramius, commander of the Red October, the eponymous Soviet submarine of Tom Clancy’s debut novel in 1984.

The gap is now back in fashion and NATO is reinvesting in anti-submarine capabilities after decades of neglect. America has stepped up flights of P8 sub-hunting aircraft from Iceland, and Britain and Norway are establishing P8 squadrons of their own. The aim is to track and hold at risk Russian nuclear subs as early as possible, because even a single one in the Atlantic could cause problems across a large swathe of ocean.

READ ALSO  Foxconn says it will continue to work with Wisconsin to create jobs, woo investors

But a defensive perimeter may not be enough. A new generation of Russian ship-based missiles could strike NATO ships or territory from far north of the GIUK gap, perhaps even from the safety of home ports. “This technological development represents a dramatically new and challenging threat to NATO forces,” concludes the IISS. Similar concerns led the Reagan administration to adopt a more offensive naval posture, sending forces above the gap and into the maritime bastion of the Soviet Union. “I’m struck by similarities with the 1980s,” says Niklas Granholm of the Swedish Defence Research Agency, reflecting on the Anglo-American presence in the Barents Sea. “A forward maritime strategy to get up close and personal with the Russian Northern Fleet, rather than meet them further south.”