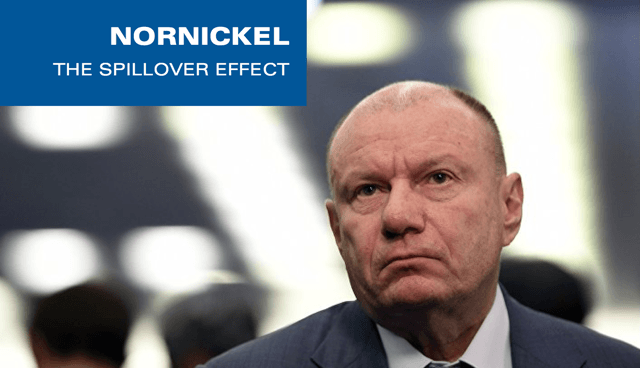 This summer, Nornickel (OTCPK:NILSY) has become the main newsmaker on environmental incidents in Russia. Even though the latter two were absolutely minor compared to the notorious oil spill, the company will now stay in the crosshairs of Russian news media at least until we see a resolution of the dispute between the Federal Service for Supervision of Natural Resources Management (Rosprirodnadzor) and Nornickel.

With its high damage estimate, Rosprirodnadzor set a pretty high starting point for further negotiations about the size of the fine. Nonetheless, there are obvious arguments that Nornickel can use to reduce the final sum of the fine.

Environmental authorities have never been a serious power in the Russian bureaucratic landscape, but this time Rosprirodnadzor was provided with a carte blanche, and the authority used it to the full extent. 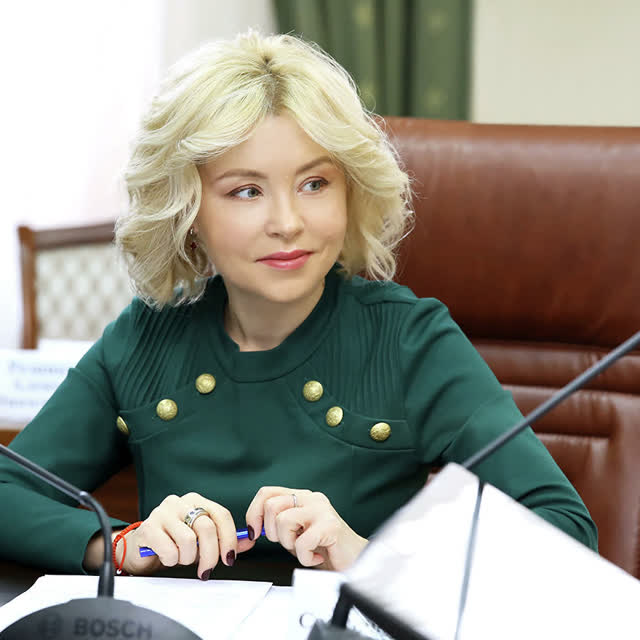 Svetlana Radionova, the head of Rosprirodnadzor, repeatedly stated that Rosprirodnadzor is ready to defend the announced estimate in court even when Nornickel pointed to potential discrepancies in the application of the damage estimation methodology. (Photo source: Rosprirodnadzor press service)

The established methodology for estimating damage implies a formula consisting of a set of ratios. The biggest inconsistency in Rosprirodnadzor’s calculation and the strongest argument of Nornickel is the calculation of the ratio, which is defined by the time of non-action on the elimination of environmental consequences of an incident. 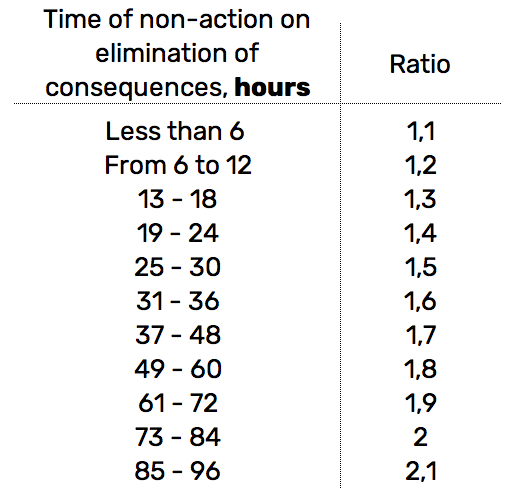 Source: Order of the Ministry of Natural Resources of Russia №71; spreadsheet made by Author

Rosprirodnadzor set the max ratio of 5, meaning that Nornickel did nothing to eliminate the pollution for more than 500 hours. This is, obviously, not true. Nornickel reported about the disaster on May 29, the same day the incident had happened. On May 31, the Unified Duty Dispatch Service of EMERCOM of Russia received four reports, including information on measures taken to eliminate the consequences of the incident. Depending on what Rosprirodnadzor formally considers as non-action behavior, I would say that the realistic estimate is somewhere between 24-48 hours, which reduces the ratio from 5 to 1.4-1.7.

Another disagreement Nornickel has is that Rosprirodnadzor incorrectly calculated the volume of spilled oil products because the calculation was made before the completion of oil product collection. The Minister of Natural Resources and Environment Dmitry Kobylkin commented on this:

“We saw the consequences of the accident, officially recorded all the indicators of the damage caused, Rosprirodnadzor calculated the damage. In accordance with the legislation on environmental protection, those who have caused harm to nature must compensate it in full. If Norilsk Nickel is ready to prove in court that it is not guilty of this incident, the company has such a right” – Kobylkin said.

Later, the head of Rosprirodnadzor provided the most recent comment on the dispute:

“We have applied all the necessary ratios, the formula contains a fairly large number of them. We believe that they are absolutely applicable to the situation, time, and actions that took place there. We are ready to prove it in court” – said Radionova.

Another sign of how serious the Russian authorities are about the incident is the news that the State Duma adopted in the second reading of a bill that allows transferring Nornickel’s fine payment to the federal budget. Under the current legislation, the fine would be transferred to the regional budget of the Krasnoyarsk region, where the city of Norilsk is located.

Russian experts are generally skeptical that the sum of the fine will be equal to the current damage assessment – they consider the fair estimate somewhere in the range of 22-59 billion roubles, or ~$306-822 million.

On the other hand, Academician of the Russian Academy of Sciences, Deputy Director of the Institute of Oceanology Mikhail Flint said in the interview to the Expert journal that the Arctic ecosystem is more fragile and therefore should be treated differently from other biomes:

“The ecosystem metabolism is very slow in the Arctic. For this reason, anthropogenic impact on it can have much more serious consequences than it might seem at first glance. In relatively warm regions, due to high temperatures, the processes of oil decomposition proceed at an accelerated rate, and it is quickly utilized under the influence of the natural environment. In the Arctic, oil residues can be found in the places of the spill even after thirty years.”

The “Arctic factor” may also be one of the key arguments of Rosprirodnadzor to justify the estimate, noting that this particular case is unlike other major incidents because this one happened in the more environmentally vulnerable Arctic.

Overall, I think it will be hard but not impossible for Nornickel to challenge the estimate. I expect that the court will take a neutral stance and judge by facts and not prejudices set on higher political levels. It should be noted that Nornickel can drag out the judicial proceedings, therefore delaying the payment of the fine.

What will happen to dividends? In the worst-case scenario, analysts expect that Nornickel will reflect the non-cash charge in the income statement for 2020 for the entire amount of $2 billion. Thus, the company’s EBITDA for 2020 will reduce from $8 billion to $6 billion. Under this scenario, net debt will rise to $9 billion and dividends are likely to be reduced from $4.8 billion to $3.6 billion, or $2.3 per ADR and 1.600 rubles per share. This gives a still quite decent yield of about 9%.

If the payment of the fine is stretched out over several years, the effect on dividends will be minimized and investors won’t see any noticeable decrease in yearly dividends.

Let me make one little announcement. For foreign investors in Russian stocks, it is often not easy to find relevant information about the dividends of Russian companies. I’ve made a simple yet informative (I hope so) solution for viewing the upcoming dividends in one place – the Russian Dividend Tracker. This is basically a spreadsheet where I periodically update the information on dividends. 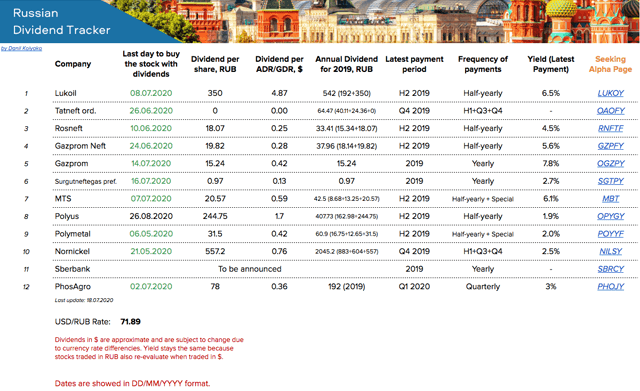