Niu (NASDAQ:NIU) is one of the best-performing stocks in NASDAQ this year. After carefully analyzing the company’s fundamentals, I argue that the Street has been overly optimistic on 1) the e-scooter market growth, 2) Niu’s strategy to enter into mid-end e-scooter market, 3) its growth potential in international markets, and 4) valuation. For the market growth, investors have been over-focused on the short-term impact driven by regulation changes but ignored the long-term oversupply issue evidenced by the significant increase in production capacity of market leaders. For Niu’s expansion plan into mid-end segment and into international markets, investors underestimated the competition and regulatory hurdles. Niu’s current valuation looks expensive compared to its peers and cannot be justified based on its growth prospect.

The biggest risk of growth investing is if a company’s growth is not as sustainable as investors projected. I argue that Niu’s current explosive growth is artificially high, mainly driven by the COIVD-19 and the new e-scooter regulation. As illustrated in the chart below, the e-scooter normalized demand in China has been stagnant since 2013. 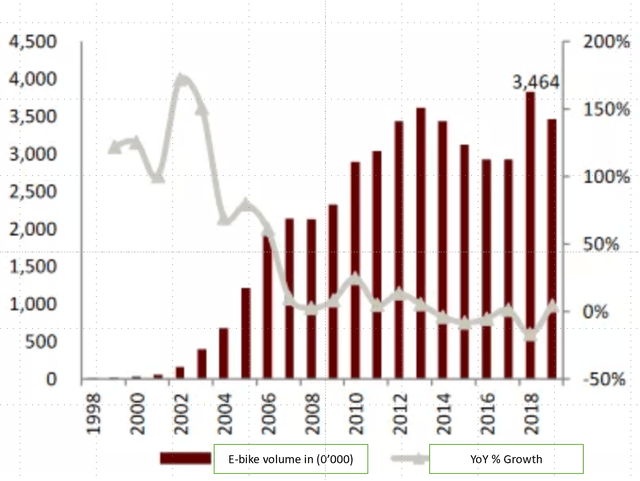 On 15th April 2019, China announced a new regulation for the e-scooter industry called “Safety Technical Specification for Electric Bicycles”. The Chinese government gives a 3-5 year grace period for non-compliance e-scooter owners to gradually replace their e-scooters. CICC Research estimated that there are at least 170M non-compliance e-scooters. Assuming 75% of those e-scooters need to be replaced in the next four years, the new regulation will create an additional 25M demand per year for the next four years. The annual demand for e-scooters in China is around 35M per year, and this number has been steady in the last few years. With the extra replacement demand stemming from the new regulation, the annual demand in the Chinese e-scooter market for the next four years is expected to be 60M units per year or 70% higher than normal demand. Unfortunately, artificial, short-term demand spike usually leads to a price war due to overcapacity. The No.1 E-scooter brand Yedea [1585.HK] and No.2 brand Aima plan to increase their production volume to 16M in 2021, up more than 60% of its 2020 projected volume. Those top two market leaders’ combined capacity in 2021 will be close to the total industry demand in 2019. Once the replacement demand gradually rolls off in the next 2-3 years, it is unlikely Niu’s growth can be sustained.

Lithium battery penetration may not increase as fast as expected 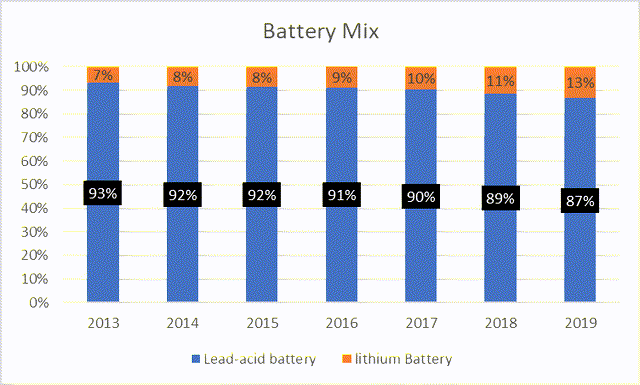 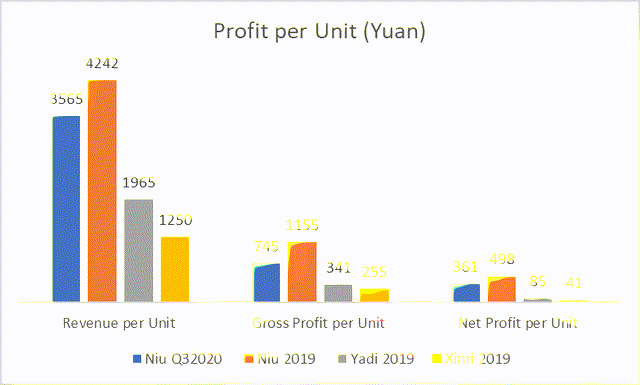 There are two alarming signs in the Q32020 results that most investors have missed. First of all, Niu’s CEO mentioned its high-end product growth has slowed down to 11%, while the company is actually known for its high-end product line. An analogy of Niu’s current situation is that Apple’s (NASDAQ:AAPL) flagship iPhone sales have significantly slowed down and it mainly relies on growth from its new $300 version iPhone. Second, the CEO commented that the lithium battery penetration would likely to lie within the range of 20-30% in 2020, which is significantly lower than the projection provided by Frost & Sullivan. This statement validates our thesis that the market is overly optimistic on lithium battery penetration. 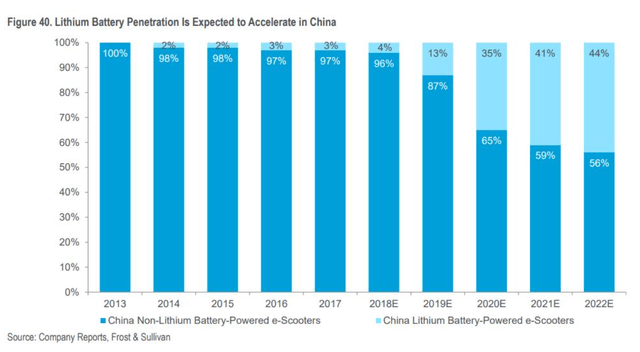 Niu’s global expansion plan is not easy, especially in the mid-end segment

United States and Europe are big international markets. The annual demand for e-scooters from Europe is around 3M per year or around 8% the size of the Chinese market. Both the U.S. and Europe have levied high tariffs on Chinese e-scooter products. United States added a 25% tariff on e-scooter imports from China in 2019. The European Commission imposed 18.8% to 79.3% on e-scooters from China. As illustrated in the chart below, the growth of e-scooter exports from China significantly declined in 2019. India and Indonesia are potential big markets. Niu is currently subject to 40% tariff in Indonesia. Given the geopolitical conflicts between India and China, the chance of Niu’s successful expansion in India is low. 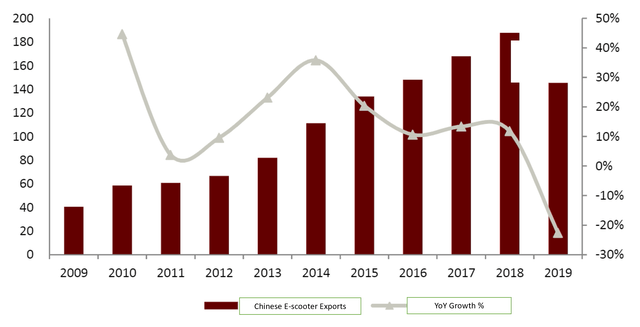 Niu’s CEO Yan Li is launching an electric-car company. The new company will have a separate team and be fully operationally independent from Niu. Li is likely to sell some shares to fund his new initiatives. I believe the new adventure will be a big distraction for Li, especially when Niu is at a critical juncture to enter into the mid-end e-scooter market.

Niu’s valuation is not cheap compared to market leader Yedea

Niu’s stock price has gone up 6x YTD, largely driven by the EV industry re-rating. Compared to many four-wheeler electrical brands which maintain leading autonomous driving technology, the two-wheeler e-scooter industry is a very commoditized market. As illustrated in the chart below, e-scooter market leader Yedea has invested much more in R&D than Niu. In June 2019, Yedea launched its innovative graphene battery product. This type of battery can be fully charged within two hours, and the battery life is extended by 2x. 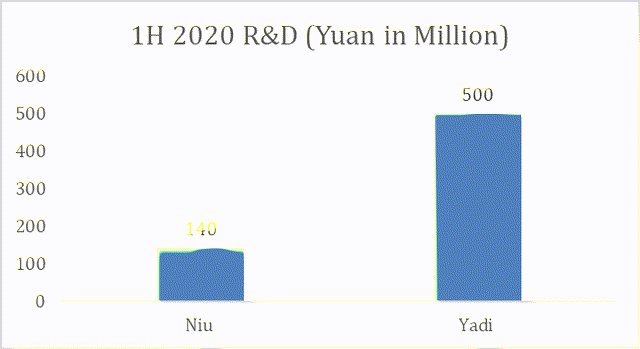 Yedea is a market leader with 25% market share vs. Niu’s 2% in 2020. Yedea was growing its revenue at 87% in 1H2020, and Niu was growing its revenue at -1% in 1H2020. According to Bloomberg, Yedea is trading at 37x TTM P/E and 27x 2021 P/E vs. Niu at 100x TTM P/E and 45x 2021 P/E. Investors are bullish on Niu, accounting on its outperformance in the international markets. But the European market is only 8% of the size of the Chinese market and Niu’s expansion into India and Indonesia are big unknowns. It is highly likely Yedea is better positioned to expand into South East Asian countries given its specialization in mid- to low-end e-scooter market, considering GDP per capita of South East Asian countries is lower than that of China. Niu is trading at a higher multiple compared to its peers mainly due to a higher-margin profile. However, as Niu’s gross margin continues to decline as it expands into a more competitive mid-end market, its valuation premium over its peers is going to narrow or eventually vanish.

READ ALSO  Higher inflation is coming and it will hit bondholders 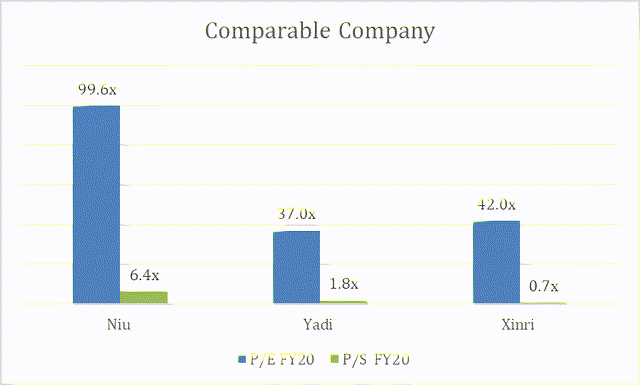 In my base case, I am assuming Niu is going to grow at 30% CAGR for the next three years, trade at 3.2x P/S ratio, at its historical average, and still carry a premium over industry peers. Given Niu’s core high-end segment is growing at 11% and its valuation multiple is likely to decrease because of the decline in growth margin, the current valuation does not support this investment as a good risk-reward opportunity. 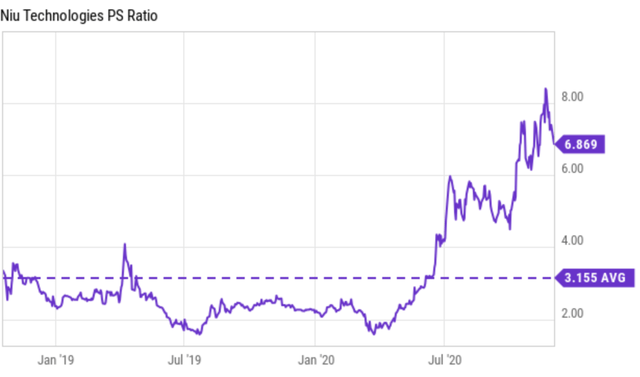 The current high growth of Niu is mainly driven by regulation, which is highly unsustainable. The short-term demand spike is likely to create overcapacity in the e-scooter industry, which will lead to long-term value destruction for shareholders. Niu’s gross margin will continue to be under pressure as it gets into the competitive mid-end market, indicated by the decline of its gross profit per vehicle. Niu is trading at a higher valuation despite having a weaker market position and a lower growth profile compared to the market leader Yedea.