Investing in NIO (NIO) is akin to investing in the future of electric vehicles in China, which is likely to become a large market, although not free of competition, which includes Tesla (TSLA). Moreover, NIO also plays an important role in the transition to autonomous vehicles (AV): it will be the first customer of Intel (INTC) Mobileye’s self-driving system (SDS) for consumer AVs in 2022 and also has a supply agreement with it to deliver Mobileye’s robotaxis for the latter’s global fleet – a business Mobileye will start commercially in 2022.

NIO’s role as a pioneer in AVs thus serves as both a competitive advantage (differentiated technology) going up against Tesla’s (NASDAQ:TSLA) Autopilot, as well as giving NIO an additional source of sales as it supplies Mobileye’s robotaxi fleet.

Compared to NIO’s 2019 deliveries of about 20,000 vehicles, deliveries to Mobileye alone could become a multiple of that number beyond 2022, as Mobileye likely has an opportunity of deploying at least several thousand vehicles in every large city it enters. Hence, despite the recent rally, long-term growth prospects remain solid.

Lastly, while it is more illustrative, for investors who ‘missed’ Tesla on its road to (its current) $373B billion market cap, NIO could serve as a “new” opportunity, as it likely will lag Tesla by about 7 years to reach 100,000 annual deliveries. In that sense, NIO is like Pinterest (PINS) in social media stocks that IPO’d 7 years after Facebook (FB).

I recently detailed Intel Mobileye’s growing robotaxi dominance, at least on paper. The company has already secured partnerships for operations in Israel, France, South Korea, and, most recently, for Japan, Taiwan, and Southeast Asia, starting in 2022-2023. Combined with the U.S., this already marks a significant global footprint for its robotaxis, which is likely only to grow in the years ahead. 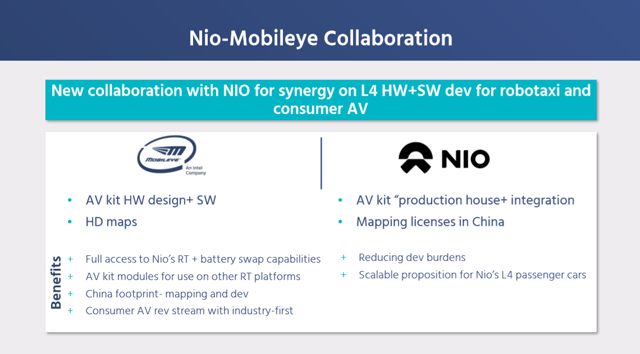 Also, earlier this year, I detailed that Intel has established an important partnership with NIO to play a pivotal role in Mobileye’s strategy. At the time, I suggested this partnership likely cushioned NIO against major downside. In the worst-case scenario, I suggested Mobileye might even acquire NIO.

In any case, the partnership held that NIO would be Mobileye’s first customer of the latter’s self-driving system in 2022, about three years before others, as Mobileye expects a 2025 timeline for broader initial consumer AV roll-out. Moreover, NIO would make a robotaxi version specifically for Mobileye, which the company would purchase from NIO. This would be beneficial for Mobileye, as it can purchase these robotaxis with its own SDS, instead of having to retrofit other vehicles with its SDS.

Since then, several further developments have occurred.

For one, NIO has secured funding, removing this concern for at least the near future. Secondly, NIO sales have rebounded strongly in Q2 to about 10,000, which is also well above the ~8,000 in Q4 before COVID-19 (and fueled the recent rally). This growth in spite of the global declines in vehicle sales should also continue to bode well for the near future.

Thirdly, and lastly, Mobileye on its side has acquired Moovit. Mobileye explained that it sees consolidation coming in the robotaxi space, as in its view, one has to own the full stack of a self-driving system. Hence, the Moovit acquisition, so it can own Moovit’s data. While Mobileye didn’t acquire NIO, it does show Mobileye’s willingness to make crucial acquisitions where it deems this necessary, as I speculated about NIO. (Another example of this is Mobileye’s acquisition of a Lidar start-up in 2019.)

Given the relatively small size of NIO, it is worth taking a closer look at how much demand robotaxis could result in for NIO. As one major caveat and risk factor, though, this assumes NIO remains the sole supplier of Mobileye’s robotaxis. For example, this is already not true in the Pinta joint venture Mobileye has with Volkswagen for Israel.

In any case, from a high level, robotaxis over time have the opportunity to become just as large as the ride-hailing market today (~$100 billion), given the cost advantage of lacking a driver. (Its cost advantage would make robotaxis even rival public transportation, according to Mobileye.) For comparison, Uber (NYSE:UBER) had 5 million drivers in Q4’19. Secondly, as discussed in a previous article (link above), Mobileye seems firmly on track to become one of the leaders in robotaxis with a global fleet.

Following article details that there are about 100,000 Uber vehicles in London and New York: Uber Revenue and Usage Statistics (2020). A more conservative comparison might be against taxi cabs, though, as robotaxis will likely have a higher utilization. To that end, the article notes there are about 20,000 of those in those two cities. As I noted in the introduction, this alone is as much as NIO’s 20,000 deliveries in 2019. As there are, of course, tens, hundreds, or even thousands of large cities worldwide to operate in potentially, Mobileye’s fleet might indeed become on the order of hundreds of thousands of vehicles or more.

Of course, this won’t happen overnight as it will take time for this segment to grow. But again, relative to NIO’s size, even several thousand additional vehicles per quarter or per month would already be a meaningful additional tailwind and source of demand. Moreover, as this will be AVs, they will likely carry a substantially higher price than NIO’s average consumer EV business.

So, for the sake of argument, let’s say NIO might supply Mobileye with 40,000 vehicles per year by 2025. This alone would be 2x growth compared to 2019, or as much deliveries per quarter as NIO achieved in Q2. And, obviously, it is very likely consumer demand would continue to increase as well.

Altogether, this likely provides NIO with a realistic path to achieve 100,000 delivers by 2025 or so, a 5-fold increase from 2019 levels, and about the level of Tesla around 2017. This suggests NIO might continue to grow well into the future.

Following quotes are from this January article: In the Race for Autonomous Vehicles, Mobileye Looks to China.

Shashua announced a new autonomous taxi venture in partnership with South Korean city Daegu. The project, for which Mobileye will supply the technology, joins three others the company is currently developing: (…).

Mobileye usually looks for a technological partner, like RATP, Shashua said, but Daegu was willing to put down significant funding for the opportunity to host robotaxis. It is the recently announced NIO partnership, however, that has Mobileye’s co-founder particularly enthusiastic. (…)

Also notably, the article states that Mobileye seems to be planning a “few thousand robotaxis” initially. Of course, this could grow quickly if it takes off.

As part of their collaboration, NIO vehicles will be mapping the Asian nation for Mobileye’s high-definition maps, a necessity for both robotaxis and autonomous vehicles. But more than that, the company will be integrating Mobileye’s self-driving system-its silicone, hardware, and sensors-into its vehicles, Shashua said.

That means that in 2022, a person buying a NIO vehicle in China will be buying a car capable of changing into an autonomous vehicle at the push of a button.” This holds true for Mobileye as well, enabling the company to buy ready-made vehicles for its fleets instead of retrofitting vehicles with its technology.

As Mobileye has stated several times in the past, 2022 is the planned timeline for the commercial deployment of the first few thousand robotaxis across Mobileye’s various collaborations. But in China, Shashua said, 2022 could signal the start of consumer autonomous vehicle sales, three years ahead of the rest of the world, which is not expected to reach that point before 2025, according to Mobileye’s current timeline.

The Q2 delivery results have recently caused a major rally in the stock to a market cap of over $15 billion. At a forward P/S of over 7, this almost makes it valued like a SaaS company, but also still well below Tesla’s 10x P/S.

If NIO could maintain this valuation close to Tesla levels, while growing sales 5-fold or more in the coming years, this suggests NIO could continue to deliver meaningful stock returns.

Summing up the risks as mentioned, it could be possible that Mobileye decides to diversify the suppliers of its robotaxis or retrofit other models. For example, Mobileye tends to enter new regions through partnerships, which might influence decisions like which vehicle will be used for SDS. But as it stands, Volkswagen will supply the vehicles for the Israel joint venture, while NIO remains the only announced customer to integrate Mobileye’s SDS.

Secondly, demand for robotaxis could be much different from my estimates, as the pace of its growth and global adoption is unknown. My 100,000 delivery target should be seen more as illustrative of the likely opportunity from both robotaxi and consumer demand.

At full production capacity, the manufacturing team is going to increase the production rate of the Hefei plant from 15 jobs per hours to 20 jobs per hour, while working together with supply chain partners to improve their capacity at the same time. By late August or early September, the overall supply chain capacity on a single shift is expected to reach 4,000 to 5,000 units per month.

After the recent rally, further near-term upside might be limited. While NIO is not guaranteed to become a second $373 billion Tesla, its market cap of over $15 billion provides investors arguably with much larger potential future returns. To that end, NIO’s funding issues have become less of a concern recently, sales have rebounded strongly from the COVID-19 dip, and long-term growth prospects seem good as China doubles down on EVs.

As discussed NIO might be one of the pioneers to deliver AVs in the market in 2022, due to its partnership with Mobileye – who knows when Tesla’s autopilot will become fully self-driving? Moreover, NIO seems set to become a key provider of Mobileye’s global robotaxi ambitions, although not guaranteed. As a comparison to the current ride-hailing market shows, over time there might be demand for thousands of robotaxis (which also carry a higher price) in every major city.

So compared to just 20,000 deliveries in 2019 or 10,000 deliveries in Q2’20, robotaxi deliveries to Mobileye could become a meaningful, and lucrative, additional source of demand starting in 2022. This by itself already might cause NIO’s earnings to become a multiple compared to 2019 levels (in the years after 2022). Meanwhile, China’s push to EVs is likely to further propel consumer demand. Altogether, as a suggested delivery target, I put 100,000 vehicles for 2025.

This would make NIO ‘lag behind’ Tesla by about 7 years (in deliveries, not necessarily technology). This is not unlike Pinterest, a company about which I have also written previously, with similar growth opportunities and whose IPO came 7 years after Facebook.

Even after the rally, NIO remains a strong buy on a pullback to more near-term valuations.

Disclosure: I am/we are long NIO, INTC. I wrote this article myself, and it expresses my own opinions. I am not receiving compensation for it (other than from Seeking Alpha). I have no business relationship with any company whose stock is mentioned in this article.