NIO (NIO) has prevailed at the forefront of the massive wave in EV as it has cruised to the fourth most valuable automaker in the world. Shares have risen over 1,000% in six months with this momentum continuing with another consecutive monthly record in the November deliveries report. NIO still has much to look forward to, with NIO Day in early January expected to see the announcement of new vehicles as well as updates to software and related technologies. November’s monthly record of deliveries, continuing record strength in recent months, sets a positive outlook for growth and stability even though shares have not taken much of a breather from this rapid run-up in valuation.

NIO’s Q3 saw a record high 12,206 vehicles delivered across its three models, and in light of the surge in demand coupled with a strong recovery and growth in auto sales in China, upped its forecast for the Q4.

November’s deliveries saw vehicle deliveries hit 5,291 units across all models, bringing the YTD delivery figure up to 36,271 units; these represent growth of 109.3% and 111.1% YoY. NIO has delivered more than half of its lifetime vehicles during 2020 as market share has continued to rise on top of expanded production capacity.

With the new monthly record, NIO is accelerating planned production capacity expansion during this month in order to keep up with demand – NIO does have the ability to produce upwards of 12,000 vehicles monthly (150,000 annually) when operating under max capacity levels; that leaves room for significant growth in deliveries as long as demand remains as strong.

For the broader picture, China’s auto sales have recovered from the pandemic plunge and have shown consecutive growth monthly. Sales grew 12.5% YoY, falling a bit from September’s growth but reducing the magnitude of the massive contraction from January to March. Further incentives targeting sales of EV should continue to push deliveries higher across the board, not just for NIO but for peers as well. Continuation of this YoY growth into Q4 points to strong consumer demand, possibly leading to successive record deliveries for NIO. 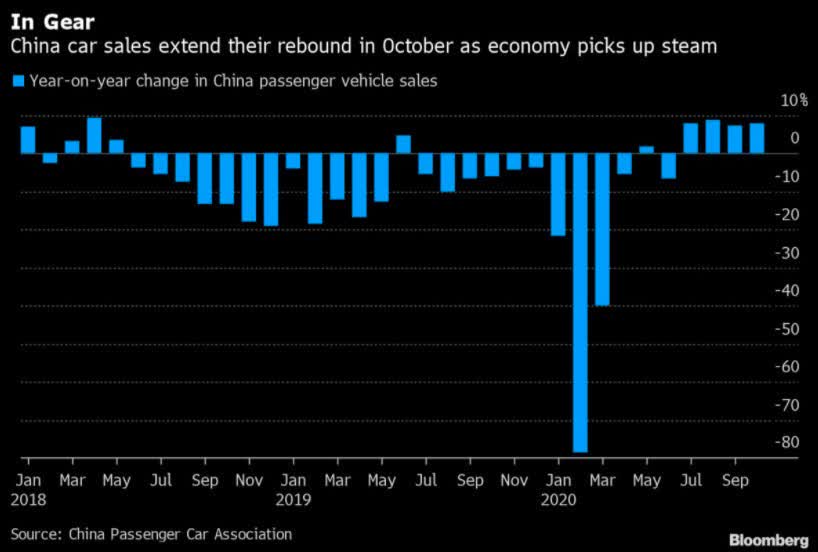 Aside from growth in demand and successive growth in NIO’s deliveries allowing it to remain one of the leaders in the premium SUV space, more developments are slated for potential release during NIO Day on January 9. At the event, NIO is expected to unveil a new flagship sedan, the EE7, as well as more details on NP2 and autonomous driving alongside more developments in FOTA, Lidar, battery tech with the new 100kWh battery, and possible updates to BaaS.

However, NIO has come a long way with its financial strength in just this year. Dilution has been a factor, with multiple share offerings alongside the massive rally, and while dilution is never an investor’s favorite, it has allowed NIO to bolster its balance sheet tremendously.

READ ALSO  Amidst The Pandemic, Women Rush To Sell Explicit Photos Of Themselves On OnlyFans

The share offerings allowed NIO to grow cash on hand from just RMB$860m at the end of FY19 to RMB$19.3b by the end of Q3 ’20 (~2,140% growth). Total assets have more than doubled, while liabilities have grown by just RMB$800m, meaning that concerns about insolvency have all but vanished.

The substantial amount of cash padding the balance sheet also provides a runway for NIO to scale spending on R&D or technological development as well as more capacity expansion and new vehicle development in the future, as it no longer is strapped for cash.

There also have been improvements in profitability with rising vehicle margins, which now sit in the mid-teens, still below the targeted high-teen margin. Margin expansion in both vehicle and gross margin will help bring NIO closer to profitability in the near future, likely by Q3/Q4 2022 as deliveries continue to scale.

NIO’s fourth monthly record in a row, as well as eighth consecutive month of triple-digit growth in deliveries, points to a solidification of market share in the premium SUV space as the overall EV market remains highly fragmented with much competition. A focus on FOTA and technological advancement in software as it branches into autonomous driving and more vehicle lines should allow NIO to keep itself on an upward trajectory in its core market. Balance sheet strengthening stemming from multiple share offerings has given NIO plenty of cash to work with in terms of innovation and product development, and more capacity expansion should lead to continual records in vehicle deliveries. Positive vehicle margin and gross margin could also see some subsequent expansion as volume continues to grow in the upcoming months and quarters.

READ ALSO  Rosenberg: Why Comparisons Between Bitcoin & Gold Are Absurd