Nikola is in a race. A month since detailed and wide-ranging fraud allegations were levied against it, the electric truck start-up is fighting to convince investors of its true value.

On Thursday its efforts will step up a gear. A showcase of the company’s hydrogen technology at a key industry conference will, Nikola hopes, begin to win over sceptics.

The revenue-less business was briefly this year valued more highly than Ford. But Nikola’s valuation has plummeted from its giddy heights of $30bn to around $10bn now and cornerstone shareholders have watched profits from their investment slide, unable to trade.

On November 30 a lock-up from its June listing ends and those shareholders, from staff with stock to industrial backers such as Bosch and CNH Industrial, can begin selling their shares.

The departure of founder Trevor Milton in the weeks following a short seller’s report robbed the business of an energetic figurehead who was able to generate huge online interest in the company and attract an army of retail investors wooed by his promise that Nikola would transform humanity.

Mr Milton has vowed to defend himself against what he called “false allegations levelled against me”.

Some of the prices the stock was trading at were absurd, even by our own internal models

Much of the criticism of Nikola in the report by Hindenburg Research centred on the company’s use of technology from suppliers, when Mr Milton had cast it as a pioneer in its own right.

Nikola’s fight to regain confidence accelerates on Thursday with an event to explain its in-house hydrogen technology to attendees at the virtual Mission Hydrogen conference.

The 24-hour summit draws together experts from across the hydrogen world, including the carmakers Toyota and Hyundai, the oil company BP and the head of the US energy department’s fuel cell unit.

Jesse Schneider, Nikola’s executive vice-president of hydrogen and fuel cell technology, will present the technology powering the company’s fuel cell truck prototype and its plans to develop hydrogen fuelling stations and infrastructure — plans that are at the heart of the company’s business plan.

Investors who bought into Nikola’s strategy, namely to build hydrogen stations and make money by selling subscriptions to drivers of their fuel cell trucks, are so far standing by the company.

“We invested in Nikola, not in Trevor,” one longtime shareholder said. “His departure changes nothing.” 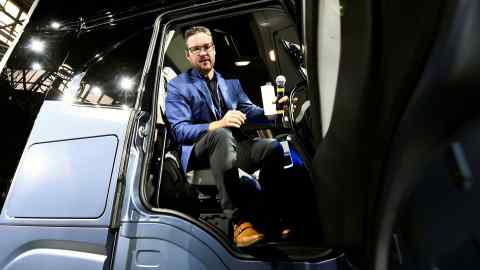 Several shareholders who spoke with the Financial Times said the big jump in the company’s share price when it first listed through a merger with VectoIQ, the special purpose acquisition company set up by former General Motors vice-chairman Stephen Girsky, was unexpected.

Mr Girsky has now taken over as chairman of the Nikola board.

“Some of the prices the stock was trading at were absurd, even by our own internal models,” said one Nikola investor. “It clearly went beyond what we thought would happen, but now things have gotten more rational”.

While Thursday’s presentation aims to win over doubters about the technology, Nikola has a more serious task of convincing two companies currently in talks not to walk away: General Motors and BP.

Days before the fraud allegations, GM struck a deal to become contract manufacturer for Nikola’s pick-up truck, the Badger, in return for an 11 per cent stake that was at the time worth $2bn.

The deal was supposed to close at the end of last month, but talks are still going on, with GM expected to get a larger stake in the business to compensate for the collapse in Nikola’s value.

Two-thirds of the business case is built on a deal with an oil company. That is mission critical

According to the original terms, the deal must close by December 3. A GM spokesman said the company was “continuing our discussions with Nikola and will provide further updates when appropriate or required”.

A potentially more significant negotiation is with BP, with which Nikola wants to work on hydrogen stations. A source familiar with the discussions said that Nikola was days away from announcing a deal with a major hydrogen partner when the Hindenburg Research report alleged that Nikola was “an intricate fraud”.

“Two-thirds of the business case is built on a deal with an oil company,” said one investor. “That is mission critical.”

Mr Milton’s departure could help smooth relationships with potential partners, according to people who have worked with the business.

While trying to build up the business, Mr Milton approached multiple carmakers and technology companies seeking partnerships, some of whom were immediately put off by his ebullient style.

“You just know when someone is hot air,” said one industry executive who met him. “I just didn’t want to be involved with him.” 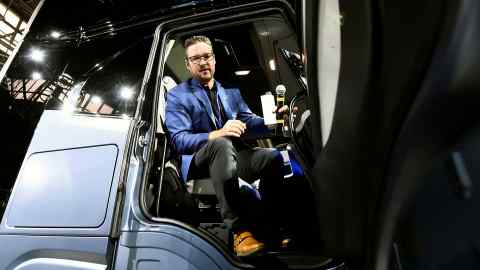 Mr Milton’s departure has also had a marked effect inside the company. While most people are going about their work as normal, rival start-ups have noticed an increase in job applications from Nikola employees, according to two people. Most applicants are from areas outside of hydrogen, such as engineering.

Some of the company’s engineers find it “beyond frustrating” that the furore around Mr Milton’s personal life and past businesses has distracted from the company’s advances with hydrogen storage and a next-generation membrane electrode assembly, said one hydrogen expert at the company.

Thursday’s presentation partly includes what representatives from GM and Iveco were shown before striking deals with the business, the hydrogen expert said.

Short-term investors will be looking to the event in the expectation that it could move Nikola’s volatile shares. The stock rocketed from $30 at flotation to $79, before falling as low as $17 in the wake of the fraud allegations. On Wednesday it was trading at $25.

Longer-term investors are looking to the expiry of the lock up and the end of next month as a moment to assess whether the company has been able to restore confidence — an effort that Nikola hopes to advance at Mission Hydrogen.