Nikola relied on supplier technology in early models and used a truck rolling downhill in a marketing video, the company has admitted, as it set out a lengthy defence of the truck start-up’s business plan in the face of a short seller’s report.

Shares in the start-up have lost 40 per cent of their value since Hindenburg Research, which profits from Nikola’s falling stock price, claimed last week that the company faked a video and passed off purchased technology as its own.

In a detailed, 2,700-word response posted on Monday, Nikola sought to counter what it described as “false and misleading statements” in the report, while dismissing accusations about the past of its founder Trevor Milton as “not relevant to Nikola”.

The company also said it was “laser-focused” and making “significant progress” in developing an electric truck with Iveco to go on sale next year. Other partnerships, including one with General Motors to make an electric pick-up truck, are also on track, it said.

But the company conceded several of the points raised by the report, including that it rolled a truck down a hill during a product video, which made the vehicle appear to be driving.

“Nikola never stated its truck was driving under its own propulsion in the video,” the group clarified on Monday.

“Nikola described this third-party video on the company’s social media as ‘In Motion’. It was never described as ‘under its own propulsion’ or ‘power-train driven’.”

Another accusation was that Nikola had used supplier components, while claiming to develop its own systems. The company covered the supplier logo on an inverter, a key electrical component, with a sticker in a video, Hindenburg alleged, including a link to the video as evidence.

Nikola said it “has been designing, engineering and working on its own inverters for quite some time”.

The supplier unit seen in the video “may be subsequently swapped out for [Nikola’s] own parts in production”, it added.

“This is common practice among vehicle manufacturers and Nikola often blocks supplier names from the view of media and competitors.”

The group added: “At no time did Nikola state that the inverter on the prototype truck shown in the video was the company’s or would be used in production.”

Other details in the rebuttal include that quotes from former employees and partners were taken out of context.

One accusation levied in the Hindenburg piece — that Nikola pegged claims of an impending battery breakthrough to a business called ZapGo that it planned to purchase — is false, it said.

“In fact, the potential battery technology advancements are related to an ongoing confidential R&D partnership with a leading academic institution, not ZapGo,” the company said. Nikola broke off talks with ZapGo and sued the company, which countersued, and which collapsed into administration earlier this year.

But the Hindenburg report said that Nikola signed a letter of intent to acquire ZapGo on October 31 2019. The Phoenix company then announced it had breakthrough battery technology on November 19 2019, “calling it the biggest advancement we have seen”.

Months after the deal to acquire ZapGo collapsed, the report said Mr Milton “suddenly changed course” in August and told Tesla fans visiting Nikola’s headquarters that the company was working with an unnamed university on battery technology.

READ ALSO  Transocean: More Pain Ahead As Backlog Is Decreasing At A Fast Pace (NYSE:RIG) 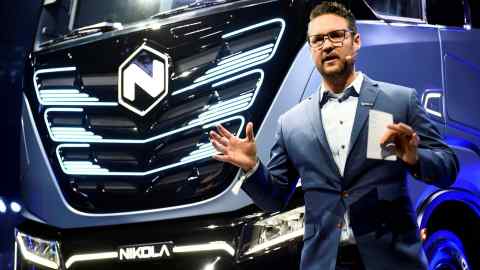 The row has raised significant questions about Nikola’s own technology that would normally be addressed in a traditional stock market listing process, but which the business largely sidestepped by merging with a blank-cheque listed group this year.

Nikola on Monday added the timing of the short report was deliberate to maximise Hindenburg’s profits, as the company’s shares had risen following a $2bn partnership with General Motors that was announced only days earlier.

While Nikola’s stock has declined more than 40 per cent, GM’s shares have lost about 10 per cent of their value since the report came out.