Nickel Monthly News For The Month Of November 2020

Welcome to the nickel miners news for November. The past month saw generally strong results from the nickel producers with several paying down and/or paying off all debt. The nickel juniors mostly progressed well. 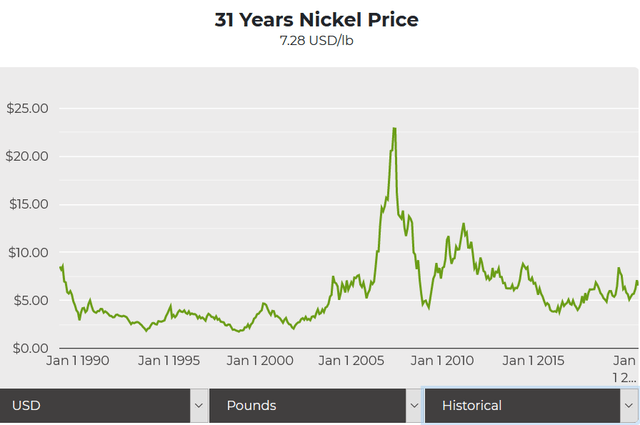 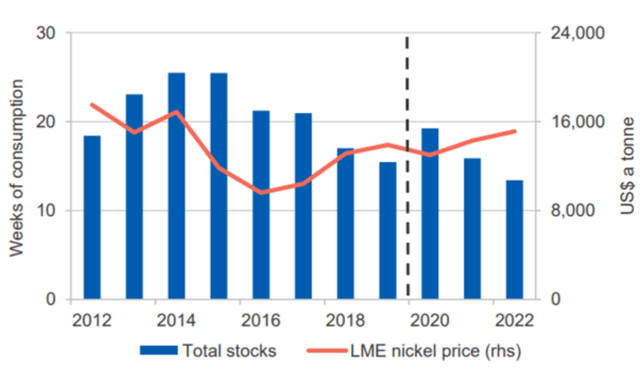 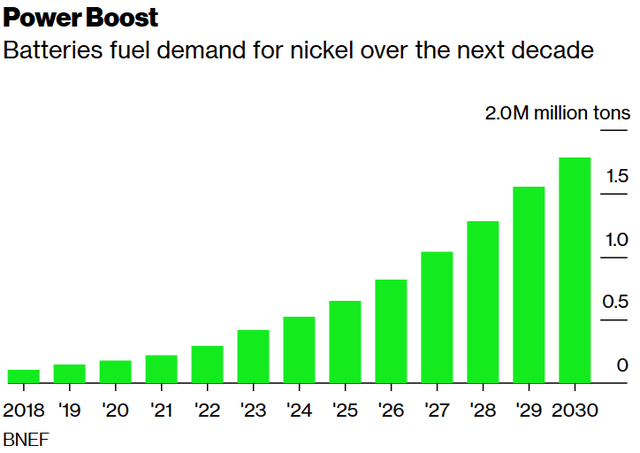 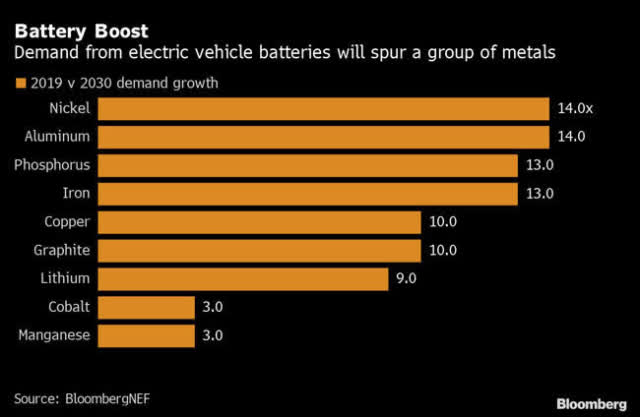 Investors can also read my past article: “Top 5 Nickel Miners To Consider Before The Nickel Boom.“

The energy transition will be built with metals. Electrification is front and centre in the energy transition. The entire power value chain – from wind turbines and solar panels, transmission and distribution infrastructure to energy storage and batteries, electric vehicle [EV] charging and the rest – will be a winner……In any scenario, demand for metals goes up……The big five transition metals are copper, aluminium, nickel, cobalt and lithium. The biggest growth sector will be electric vehicles – a 2 °C or lower pathway will see demand soar from 5 million vehicles today to at least 80 million by 2030. The EV body will heavily rely on aluminium to minimise weight, and copper for wiring. The batteries for EVs and the emerging energy storage market will drive up demand for lithium, nickel and cobalt. Copper and aluminium are critical to the expansion of transmission and distribution grids, as are solar panels……We’re forecasting copper and aluminium demand to increase by about a third by 2040, nickel by two-thirds, and cobalt and lithium by 200% and 600%, respectively ……Our view is that we are two to three years away from any sustained economic recovery and the higher prices to incentivise investment in new supply.

How do cobalt and nickel stack up in race to dominate electric vehicle battery market? There are a host of battery technologies under development including NCM (nickel, cobalt and manganese) battery whilst its long-time rival is the lithium iron phosphate (LFP) battery. Car technology company Tesla is developing a LMNO (lithium, manganese, nickel oxide) battery which it hopes to commercialise by 2022/23, whilst Johnson Matthey and BASF, the German chemicals giant, are developing a lithium nickel oxide battery. “All the battery commodities will see demand grow over the next 10 years on the back of the rise in EV sales,” said Morgan Stanley. But nickel would be “the biggest beneficiary whilst the technical evolution suggests cobalt will be thrifted out of EV batteries over the decade,” it said…… RBC Capital Markets, however, thinks there is potential for nickel to become as equal a price problem in cathodes, especially if new nickel demand behaves as forecast: 700,000 tons of new demand by 2023 to 2025 moving to 1.4 million tons by 2030…. “There is therefore in our view potential that cobalt regains some demand in batteries especially as nickel moves through its incentive pricing cycle,” it said. One metal likely to benefit in any eventuality is copper. Used in batteries, copper is also required in the infrastructural rollout required to support EV refuelling stations both domestically and in wider society. Manganese, hitherto relatively ignored in the battery metal equation largely owing to its small market share, is also a potential major beneficiary, especially as Tesla’s manganese-rich battery is developed, say analysts.

Vale informs on estimates update. Vale S.A. (“Vale”), informs that it has updated today, in its third quarter 2020 earnings report, the estimate for capital expenditure in 2020 from US$ 4.6 billion to US$ 4.2 billion.

Vale’s performance in 3q20. Proforma adjusted EBITDA reached US$ 6.224 billion, US$ 2.638 billion higher than in 2Q20 and the highest since 4Q13. While EBITDA improved in all Vale’s business, the better result was mainly driven by the 26% increase of iron ore realized prices and 20% higher iron ore sales volumes in 3Q20…..LME nickel prices posted strong gains in 3Q20, averaging US$ 14,210/t compared to US$ 12,215/t in 2Q20. This represents a 16%, or nearly US$2,000/t, increase quarter over quarter. Total exchange inventories [LME and SHFE] had a net increase, closing at 266.8 kt by the end of 3Q20, an increase of 3.9 kt from the previous quarter…..Global stainless-steel production increased 14.5% in 3Q20 relative to 2Q20 as strong Chinese production continued to increase, offsetting weakness in Europe and North America. While global stainless-steel production is forecasted to be down 4% in 2020….. Our near-term view for nickel remains the same, we believe the market will be in surplus in 2020. COVID-19 has certainly impacted demand, particularly in the high-value markets, such as aerospace, automotive and oil & gas sectors. However, positive signs have emerged much sooner than expected, such as strength in Chinese stainless-steel production, a strong rebound in EV and automotive sales. Our long-term outlook for nickel continues to remain positive.

Nornickel board of directors recommends interim dividend for 9m 2020. The Board of Directors has recommended for the EGM approval an interim dividend for the nine months of 2020 in the amount of RUB 623.35 per ordinary share (approximately USD 7.74 at the RUB/USD exchange rate the Russian Central Bank as of November 3, 2020), totaling RUB 98.64 bn (approximately USD 1.2 bn). The Board of Directors has proposed to set the dividend record date (the list of shareholders entitled to the dividend) on December 24, 2020.

Investors can read my article “An Update On Norilsk Nickel.”

BHP’s Nickel West (includes the Mt Keith nickel mine in Australia) has a Measured and Indicated Resource of 4.1Mt with a Total Resource Contained Nickel of 6.3Mt, with an average grade of 0.58% Ni in sulphide ore. Nickel West produced 80 kt of nickel in FY 2020. BHP has plans to expand nickel sulphate production to meet future battery demand, with Stage 1 at Nickel West targeting expansion to 100ktpa nickel sulphate, and Stage 2 to follow.

READ ALSO  The impact of Covid-19 on productivity

On October 28, Eramet announced: “Eramet: Third-quarter 2020 turnover stable, the sales of the Mining and Metals division offset the impact of the profound aerospace crisis.” Highlights include:

On November 23, Sherritt International announced: “Sherritt’s CEO to step down from role in 2021.”

Panoramic’s Savannah mine and mill has a forecast life of mine average annual production rate of 10,800t of nickel, 6,100t of copper and 800t of cobalt metal contained in concentrate. 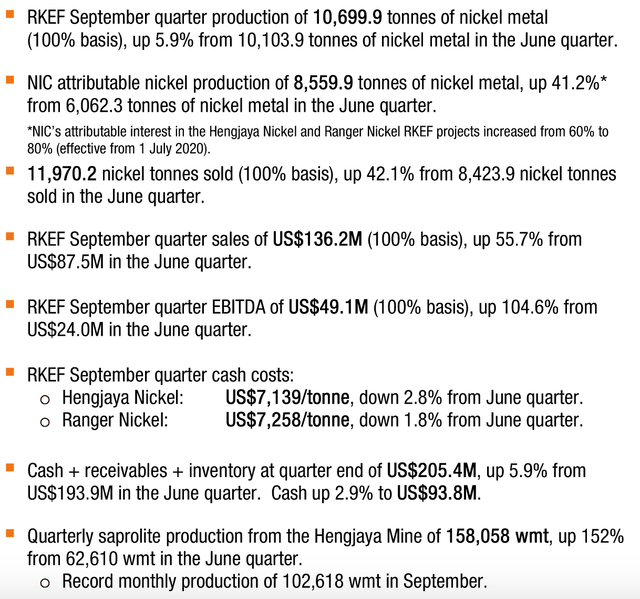 Agreement executed for the acquisition of 70% of the Angel Nickel Project.

Conic Metals has been formed from the Cobalt 27 spin-out. Conic Metals offers broad exposure to nickel and cobalt through a 8.56% JV interest in Ramu, 11 royalty investments.

Conic releases Ramu q3 2020 performance. “Conic is pleased to announce Ramu’s Q3 operating results have not been negatively impacted by the global pandemic and in fact Q3 represented one of our best production quarters” stated Justin Cochrane, President and CEO. “Nickel production was 8% higher in the quarter compared to Q3 2019 and year to date is 2% higher in comparison to the same period in 2019. Ramu is on track to meet guidance of 32,000-33,000 of nickel production in 2020……

AMC holds 13.43% of NRR post USD10m equity investment. Amur Minerals Corporation (“Amur” or the “Company”), the nickel-copper sulphide mineral exploration and resource development company focused on the far east of Russia, is pleased to announce that certain existing shareholders of Nathan River Resources Pte Limited (“NRR”), have opted to provide further US$10 million in equity financing to NRR to provide additional working capital to advance the shipment of stockpiles and processing of mined blocks at the Roper Bar Iron Ore project in the Northern Territories, Australia, in order to take advantage of the current high iron ore prices.

Note: This analyst’s report on Poseidon Nickel [ASX:POS] valuation is A$0.15. The stock is trading currently at A$0.07, so still ~2x upside.

Tamarack is a high grade nickel-copper-cobalt project located in Minnnesota, USA, with considerable exploration upside. Talon Metals is earning in to own a 51% share by March 2022, with potential to further earn-in to a 60% share by 2026.

On November 2, Talon Metals announced: “Drilling at the Tamarack Project continues to point towards a new zone of shallow nickel mineralization outside of Talon Metals’ resource area.” Highlights include:

Garibaldi to drill high-grade Casper Quartz Gold Vein. Garibaldi Resources is pleased to provide an update on plans to extend its drilling program up at the Eskay Camp. As winter arrives at the E&L nickel-copper-cobalt massive sulphide project on Nickel Mountain, drilling will now pivot to the low elevation (430m) Casper quartz gold vein discovered last fall. Garibaldi owns a 100% interest in over 180 sq. kms of highly prospective claims, in the heart of the Eskay Gold Camp. The E&L and Casper are significant major discoveries made by the Company within their claim group in NW British Columbia.

Garibaldi updates financing. Garibaldi Resources is pleased to announce that further to the Company’s November16, 2020 news release reporting the arrangement of a non-brokered private placement of up to 5 million flow-through units at 60 cents to raise up to $3,000,000 [CDN], the Company has closed the first tranche of $2,033,200 CDN by the issuance of 3,388,666 units at 60 cents per unit.

The Cathedrals, Stricklands and Investigators nickel-copper discoveries (at Mt Alexander) are located on E29/638, which is held in joint venture by Western Areas Limited (25%) and St George (75%). St George is the Manager of the Project with Western Areas retaining a 25% non-contributing interest in the Project (in regard to E29/638 only) until there is a decision to mine.

Investors can view a CEO video here, or my CEO interview here on Trend Investing.

Giga Metals Corporation announces results of a comprehensive Preliminary Economic Assessment (“PEA”) for the production of high-grade nickel concentrate from the Turnagain nickel deposit. The PEA indicates a long-life, large-scale project. With a projected build capital of US$1.4B (Phase 1) and US$0.5B (Phase 2) including significant investment for a powerline delivering low-cost, clean, low-carbon power from BC Hydro (mainly hydroelectric), the projected capital intensity is US$51,500 per annual tonne nickel at full rates (years 6 to 20)……At metals prices of U.S. $7.50 per pound of nickel and smelter terms of 78% NSR as provided by Wood Mackenzie, Turnagain is expected to have a pre-tax IRR of 6.3%.

Giga announces internal analysis of Turnagain project vs HPAL projects. Our Preliminary Economic Assessment (PEA), announced October 28, 2020, modelled a mine that would produce an average of 33,000 tonnes per year of nickel over a mine life of 37 years with marginal economics at current nickel prices,” said Mr. Vydra. “The nickel would be contained in an exceptionally clean sulphide concentrate grading 18% nickel and 1% cobalt, suitable for smelting and refining into Class I nickel, as modelled in the PEA. We are also planning to conduct further testwork to confirm the amenability of Turnagain concentrate to direct refining via hydrometallurgy into recovered nickel suitable for the battery industry whether it be powder, briquettes or sulphate……”

Note: Some of the above companies are covered in the Cobalt monthly news.

PS: If you are a company covered in this monthly news you can help support the service by joining Trend Investing here.

Disclosure: I am/we are long BHP Group [ASX:BHP], Vale SA (VALE), NORILSK NICKEL [LSE:MNOD], GLENCORE [LSX:GLEN], ARDEA RESOURCES [ASX:ARL], AUSTRALIAN MINES [ASX:AUZ], POSEIDON NICKEL [ASX:POS], Amur Minerals [LN:AMC], Jervois Mining [TSXV:JRV]. I wrote this article myself, and it expresses my own opinions. I am not receiving compensation for it (other than from Seeking Alpha). I have no business relationship with any company whose stock is mentioned in this article.